A detailed chonology of events in the dismissal of U.S. attorneys controversy. 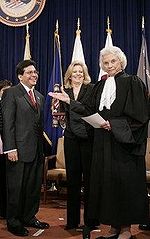 Gonzales after swearing in ceremony

Bud Cummins, who was asked to resign in June 2006

"The hearing on "Executive Nomination" scheduled by the Senate Committee on the Judiciary for Tuesday, June 26, 2007 at 10:00 a.m. in Room 226 of the Senate Dirksen Office Building has been cancelled. The President is withdrawing Mr. Mercer's nomination."

Senate Judiciary Committee Chairman Senator Leahy commented on the nomination withdrawal:[156] "The White House has found many ways to keep sunlight from reaching some of the darker corners of the Bush Justice Department, but this is a new one."

"Mary Beth Buchanan has always had and continues to have my full confidence and support as the U.S. Attorney in the Western District of Pennsylvania. I also appreciate her willingness to step in and effectively run the Office on Violence Against Women and the good work she is doing in that important office. I look forward to her continued service at the Department of Justice."[159]

The statement is issued thirteen days after Ms. Buchanan's June 15, 2007 questioning by House and Senate Judiciary committee staff investigators about her knowledge of the dismissals of US Attorneys.

Three of these interim appointees, for the Southern District of Illinois, the District of Puerto Rico and the Southern District of West Virginia, along with those in two other districts, were appointed to be interim United States Attorneys after serving a 210-day term as Acting United States Attorney under the Vacancies Act. Acting under the guidance of what we believe to be an erroneous opinion of the Justice Department's Office of Legal Counsel, the Administration has been employing this misguided approach to put somebody in place for 330 days without the advice and consent of the Senate. This approach runs afoul of Congressional intent and the law.