Democratic Union of Hungarians in Romania

Democratic Union of Hungarians in Romania

Officially organised as a political alliance (not as a party), UDMR nevertheless acts as one of the main parties of Romania. From 1996 until the 2008 Romanian legislative elections, UDMR was a member or supporter of every government. After the 2008 elections, UDMR entered opposition, but at the end of 2009 it became once again a member of the government coalition.

UDMR is not a legally registered political party, but takes part in elections under art. 4(2) of the Law 68/1992 which assimilates organizations representing national minorities to political parties from an electoral point of view. UDMR is represented in both houses of the Romanian Parliament since its formation. UDMR is classified as a "union" or "alliance", which incorporates several platforms of different ideologies.

UDMR aims to represent the Magyar (ethnic Hungarian) community of Romania, which is one of the largest national minorities in Europe (1,431,807 citizens, according to the 2002 census). In national elections, the union consistently obtains around 6% of the votes, which roughly corresponds to the percentage of ethnic Hungarian voters. From 1996 until the 2008 Romanian legislative elections, UDMR was part of all of Romania's governing coalitions, although not always a formal partner in government.

UDMR was founded December 25, 1989, immediately after the fall of the Communist dictatorship in the (Romanian Revolution of 1989), to represent in public the interests of the Hungarian community in Romania. Its founder was the writer Géza Domokos.

UDMR obtained consistent results during the 1990, 1992, 1996, 2000 and 2004 elections, gaining representation in both houses of the Parliament. Until 1996, the UDMR acted in opposition. From 1996 the party governed in a coalition with the Romanian Democratic Convention (Convenţia Democrată Română, CDR)—a wide alliance that won the elections that year—and obtained some positions in the government of Victor Ciorbea.

Four years later, the formerly-in-opposition Social Democratic Party of Romania (PSD) won the 2000 elections. Although UDMR did not join the new government as a coalition partner, it did sign a series of annual contracts with the PSD in which the PSD pledged to implement certain legal rights for the Hungarian minority community in return for UDMR's support in parliament.

In the 2004 elections, the UDMR made an alliance to back Adrian Năstase of the Social Democratic Party, who was the favourite to win the presidential elections, but the surprise victory of Traian Băsescu rocked the Romanian political spectrum. After negotiations, the UDMR, together with the Romanian Humanist Party (now the Conservative Party), defected from the PSD alliance and pledged to form a coalition with the Justice and Truth Alliance. The UDMR obtained positions in the government. After the 2008 Romanian legislative elections UDMR entered in opposition. 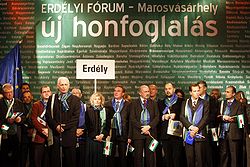 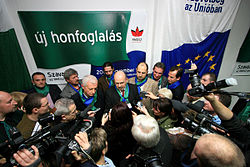 As an ethnic minority party representing Romanian Magyars the UDMR, above all, concerns itself with Hungarian minority rights, including cultural and territorial autonomy on an ethnic basis. To advance its goals, UDMR participated in or supported all the governments of Romania from 1996 on, regardless of their political color. UDMR is a member of the European People's Party (EPP). The purpose of the UDMR is to obtain regional autonomy for ethnic Hungarians, according to its then-leader, Béla Markó, who declared: "The goal of the UDMR is the territorial autonomy which we deserve".[2] In 2006, the leaders of the UDMR voted in favor of territorial autonomy for the Székely Land within Romania,[3] favoring decentralization of the territories in Romania to win more power for local authorities and encourage better distribution of wealth. According to a 2007 statement by Markó, the goal of the UDMR is to "recover the country lost in 1918", including "the houses, the woods, the lands, and the flag".[4]

Various specific goals, gradually detailed during the years, include:

UDMR is strongly in favor of cultural autonomy, (on an individual basis). UDMR leaders have claimed on several occasions that they believe local autonomy (decentralization) to be the most appropriate and efficient form of self-government. However, UDMR has also stated that it wishes to achieve this goal only through a dialogue and consensus with the Romanian majority, and based on proven Western European models.

UDMR has been criticised on several occasions for its lack of specific doctrine. The main argument for preserving the current structure is that if it split up into smaller fractions of different ideological orientations, it would be impossible for the Hungarian community to obtain more seats in the Parliament (a seat is allotted to each minority group by default) due to the electoral threshold of 5%.

Several voices from within the UDMR and the Hungarian community have criticised it for being too moderate, and making too many compromises in political treaties with other Romanian parties. The Hungarian Civic Alliance split from UDMR, aiming to form a separate, more radical, political entity. However, during the 2004 elections, UDMR proved to still have the support of the overwhelming majority of Hungarians. Disputes with this fraction-group led to the departure of László Tőkés (who was in support of the break-away group) from the position of honorary president.

See also: György Frunda#Report on the "Concept of Nation"

An important leader of UDMR, György Frunda, who is also a senator in the Romanian Parliament, reportedly said: "I do not represent Romania [in the Parliamentary Assembly of the Council of Europe]. I am the head of the Romanian Delegation, elected by 10 members who represented Romania at a parliamentary level,"[5] causing some controversy within Romania regarding the loyalty of Frunda to the Romanian state. Emil Boc, the Mayor of Cluj-Napoca and leader of Democratic Party, asked György Frunda to be loyal to Romania.[6]

Frunda later defined the way in which he was quoted by the press as "an injustice", and declared: "I have represented and will always represent my country, with dignity and in accordance with my best knowledge. But I have said, and it is true, that I did not draft this report as a Romanian senator, I have drafted it through appointment and with a mandate from the Council of Europe's Judicial Committee [...]".[7]

Poster above the UDMR's Bucharest headquarters, located on Lipscani.

The organization's president is Culture Minister Hunor Kelemen, elected at a party congress in 2011. Béla Markó, a writer, had held the position from 1993. He in turn was preceded by founding president Géza Domokos, in office from 1990 to 1993.

UDMR is structured into 22 territorial organizations, covering all regions of Transylvania and the capital Bucharest, as well as into platforms representing different political ideologies. It has several associated partners and groups representing the civil society, or the social, scientific, artistic or professional domains. As decision-making bodies, UDMR operates a Council of Representatives, a Congress, and an Operative Council.

After the Government's restructuring in Spring 2007 UDMR designated the following members of the government, in the Tăriceanu II cabinet (Călin Popescu-Tăriceanu is the prime minister):

As of 2006[update], these four all continue to hold these positions.

UDMR sent 10 senators and 22 deputies to the Romanian Parliament, accounting for (respectively) 7.3% and 6.6% of the seats. 186 mayors, 250 deputy mayors, 2481 local councilors and 112 county councilors were named by UDMR, and claim as its major accomplishment in that election the fact that UDMR mayors were elected in some cities where Hungarians are in the minority, such as Satu Mare, Reghin, Marghita and Jimbolia. This signals an end to ethnicity-based voting, and proves that UDMR has some support and acceptance within the ethnic Romanian majority.

Some of the main accomplishments of UDMR since 1989 concerning the Hungarian minority have been: