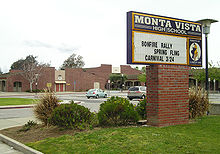 Front of the high school. 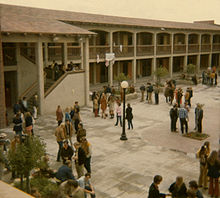 Monta Vista High School is a four-year comprehensive public high school located in the Silicon Valley city of Cupertino, California, USA. Part of the Fremont Union High School District, the school serves most of the suburban residential and industrial technology enriched area of western Cupertino. Monta Vista opened in 1969, offering only freshman and sophomore classes; the first class graduated in 1972. Since then, its student body size has averaged about 2400 students. Monta Vista is regarded as one of the top high schools in California located in one of the most affluent cities in the country with recorded average income of more than $100,000 per household.

As of the 2006-2007 school year, Monta Vista has a student body of 2,450 students, of which 72% are Asian, 25% are White and 3% are Other (African American,Latino,Native American). 5% are limited English.[1] Monta Vista has the largest student body in the district. Starting in the 1990s, Monta Vista was heavily Chinese though recently, there has been a significant influx of South Asians beginning in the 2000s. A 2005 Wall Street Journal article claimed that Monta Vista was experiencing a "white flight" caused by White American families feeling overwhelmed by the academic focus of the school's majority Asian American students.[2]

With an API score of 949 points out of 1000,[3] In the class of 2009, there are 42 National Merit Semi-finalists and 84 National Merit Commended students. After analyzing 21,069 public high schools in America, US News & World Report issued America's Best High Schools in 2009 which ranked Monta Vista #73. In 2007, Newsweek's 1,200 top U.S. schools ranked Monta Vista #85, the 7th Californian high school. The highest ranked school in the Fremont Union High School District, The Washington Post magazine ranked Monta Vista as the 57th best high school in the United States, the fourth highest academically performing high school in all of California,[4] and the highest academically ranked school in the Fremont Union High School District in 2005. Though these rankings exclude private schools, many have selective admission policies, whereas schools like Monta Vista and Lynbrook do not; however, proof of residency is required for enrollment. For this reason, these rankings do not necessarily provide accurate results for all high schools.[5]

Monta Vista Students are encouraged to take a challenging curriculum, offering up to seven classes a day. The school offers eight honors classes and fifteen Advanced Placement classes.[6] By sophomore year, students are already taking honors-level classes, with some already taking AP-level courses such as Music Theory or Computer Science. Students are required to take two science classes, however most choose to take all three major offerings at the school (Biology, Chemistry, and Physics). Monta Vista's science offerings are particularly strong, with its Physics program known for being more challenging than entry-level college courses. In the 2010-2011 school year, Monta Vista produced four Intel International Science and Engineering Fair semi-finalists.

During students' junior and senior years, they can choose to participate in one of the alternative programs offered through De Anza College. The Middle College Program is available to juniors and seniors, while College Now is offered exclusively to members of the senior class. These programs allow students to explore interests with classes that aren't always offered at high school and build up college credits while completing the requirements for a diploma.[7]

The school's campus consists of a large baseball field, an unlit American football field, and tennis courts. Due to neighborhood complaints about noise levels, as well as a lack of lighting on the field, Monta Vista holds most of their home football games at Cupertino High School. In 2007, the school completed construction of the new lighted pool, which is host to several water polo and swimming competitions per year.

The Class of 2011 began a tradition where students would camp out at school the day and night before orientation to change their courses and schedules, in order to have teachers of their choice. As a result of their actions, the administration took teacher names off of preliminary schedules to curb the camp outs, however students reverse-engineered teacher names from class section numbers. For the 2011-2012 school year, all section numbers have been removed and it was made impossible for future classes to know their teachers ahead of time. Police patrols were set up to curb any attempts to camp out.

Monta Vista High School has a school-wide acclaimed leadership class that is ranked from ASB Officers (usually seniors that have been class officers for the majority of their school experience, class officers for each grade (that plan their class's events, fundraisers and proms are elected through weeks of competitive campaigning) and commissions (groups of students that focus on a specific goal to help the school.) Due to budget cuts and district changes, the class consists of two advisors and the combination of Community Leadership, so the class now includes a Board.

The majority of the school's buildings are built in the Spanish Mission architectural style. The school has been undergoing a multi-million dollar facilities modernization, with a new library, completed in late 2005, showcased in the center of campus. Small renovations, such as the fitting of metal doors in place of old wooden ones, were completed over the summer of 2006. The athletic facilities, such as the gym, swimming pool and locker rooms, have now completed renovation. A new school office has also been constructed.

Monta Vista is divided into four major structures. A Building holds most of the foreign languages. B Building has many science classrooms and language arts, with C Building holding many social sciences. D Building is a relatively new building, and has math and science classrooms and the Monta Vista Linux Lab, where computer programming classes are held. The F building is located on the opposite side of the campus, and has arts, performing arts, and industrial technology classes.

The Fremont Union High School District was given bond money from a county measure to undergo renovatons and improvements, including the installation of solar panels above the student parking lot and planting of AstroTurf on the football field.