Dhritarashtra
This page describes the figure in the Hindu epic Mahābhārata. For the figure in Buddhist mythology, see Dhṛtarāṣṭra. See also disambiguation.

In the Mahābhārata, Dhritarashtra (Sanskrit: धृतराष्ट्र, dhritarāshtra) was King of Hastinapur at the time of the Kurukshetra War, the epic's climactic event. He was born the son of Vichitravirya's first wife Ambika, and was fathered by Vyasa. He was blind from birth, and became father to a hundred children by his wife Gandhari (Gāndhārī). These children, including the eldest son Duryodhana, came to be known as the Kauravas. Dhritarashtra was half-brother of Pandu, and was uncle to the five Pandavas, with whom his sons fought the Kurukshetra War. He appears in Mahābhārata sections that have been circulated as separate scriptures, most notably the Bhagavad Gita, whose dialogue was narrated to him.

After Vichitravirya's death, his mother Satyavati sent for her first born, Vyasa. According to his mother's wishes, he visited both the wives of Vichitravirya to grant them a son with his yogic powers. When Vyasa visited Ambika, she saw his dreadful and forbidding appearance with burning eyes. In her frightened state, she closed her eyes and dared not open them. Hence her son, Dhritarashtra, was born blind. His brother Pandu, the son of Vichitravirya's second wife Ambalika, got the crown of Hastinapur and after the death of Pandu no one could agree on the selection of a king. Duryodhana became the crown prince of Hastinapur and Yudhishthira became the emperor of Indraprastha.

Duryodhana was focused on making sure that the he would be the next heir for the kingdom. The king himself wanted his son to be his heir but he was also forced to consider the eldest Pandava, Yudhisthira who was older than Duryodhana.

Against his will, he named Yudhisthira his heir which left Duryodhana frustrated. As a solution Bhishma suggested the partition of Hastinapur. Trying to maintain peace, Dhritarashtra gave Yudhisthira half the Kuru kingdom, albeit the lands which were arid, unprosperous and scantily populated, known as Khandavaprastha. He purposely kept the better half of the kingdom for himself so that his son may one day rule his half of the kingdom.

Dhritarashtra was one of the many men present when Yudhisthira lost the dice game against Shakuni, Duryodhana, Dushasana and Karna. With each throw, the King Yudhisthira lost everything gambling away his kingdom, his wealth, his brothers and finally his wife. Dhritarashtra was silent when Dushasana tried to disrobe Draupadi (the Pandava's wife) in front of the court. Finally, the blind monarch's conscience was stirred, in part fearing the wrath of Pandavas against his sons. Fearing retribution from the five brothers he returned all the things they lost in the dice game.

However, Shakuni challenged Yudhisthira one more time, and Yudhisthira once more lost. This time, he, his brothers and his wife were forced to discharge the debt by spending thirteen years in exile in the forest before they could reclaim their kingdom. Dhritarashtra was warned by many that the Pandavas will not forget their humiliation. He was constantly told by many that he needed to remember that his responsibilities as king must be placed before his affection as a father.

Sanjaya, Dhritrashtra’s charioteer was blessed by Sage Vyasa with the ability to see the past, present and the future, narrated important events of the Kurukshetra war, a war fought between the Kauravas (the sons of Dhritarashtra) and the Pandavas, to the blind king. Dhritarashtra's sorrow increased day by day as an ever increasing number of his sons were slain by Bhima. He frequently bemoaned his ineffectiveness in preventing Duryodhana from going to war. Sanjaya often consoled the bereaved king but reminded him every time that dharma was on the Pandava side and a war against Krishna and Arjuna could not be humanly won regardless of the strength of the opposing force.

At the end of the great battle, Dhritarashtra was overcome with grief and rage at the loss of his hundred sons. When the blind king met the Pandavas who had come to seek his blessing prior to ascending the throne, he embraced all of them. When it was Bhima's turn, Krishna knew that the king was blind and possessed the strength of a hundred thousand elephants from the boon granted by Vyasa. He was quick to move Bhima aside and push an iron figure of Bhima into Dhritarashtra's embrace. When the thought entered Dhritarashtra's mind that the man in his embrace had killed every one of his hundred sons without mercy, his anger rose to such a pitch that the metal statue was crushed into powder. Thus, Bhima was saved and Dhritarashtra composed himself and gave the Pandavas his blessing. 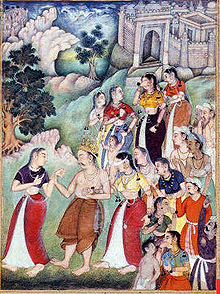 Yudhisthira was crowned king of both Indraprastha and Hastinapura. The war had killed many great warriors and soldiers were killed on each side. Yudhisthira once again showed his kindness when he decided that the king of the city of Hastinapura should be Dhristarashtra. He offered the blind king complete respect and deference as an elder, despite his misdeeds and the evil of his dead sons.

After many years as the ruler of Hastinapura, Dhristarashtra along with Ghandhari, Kunti and Vidura left for their final journey into the forest. They died in a forest fire in the Himalayas.

The first stanza of the Bhagavad Gita is a question from Dhritarashtra to Sanjaya asking him to recount the Kurukshetra war. The name is written Dhṛtarāṣṭra in IAST transliteration.

After the Mahabharata war was over, Dhritarastra upset over death of his hundred sons, asked Sri Krishna the reason for his blindness despite the fact that he was a kind and just king. Sri Krishna asked him to meditate and after meditating he realized that it was the law of Karma that was in action. Dhritarashtra in his earlier reincarnation was a tyrant king, who one day while walking on the lake side saw a swan bird surrounded by hundred cygnets. He ordered to remove the swan bird's eyes and kill all the hundred cygnets just for his passing fancy. Therefore, in this birth he was born blind and all his sons were killed in the war.[1]

Roles in Bhagavad Gita and Sanatsujatiya

Dhṛtarāṣṭra appears in two subsections of the Mahābhārata which are often treated as stand-alone texts, and were both commented upon by Adi Shankara.

He appears in the opening chapter of the Bhagavad Gītā, which takes place immediately before the start of the Kurukshetra War. The Gita's dialogue between Arjuna and Krishna is recounted as narrated to Dhṛtarāṣṭra by Sanjaya.

Dhṛtarāṣṭra is also a central figure in the Sanatsujatiya, in which Dhṛtarāṣṭra asks many questions to Sanatsujata, a divine sage. Sanatsujata has been invoked through meditation by Vidura, Dhṛtarāṣṭra's half-brother and counselor.