Tonsilloliths, also known as a tonsil stones, are clusters of calcified material that form in the crevasses of the tonsils.[1] While they occur most commonly in the palatine tonsils, they may also occur in the lingual tonsils.[1] Tonsilloliths have been recorded weighing from 300 mg to 42 g.[1] They are composed mostly of calcium, but may contain other minerals such as phosphorus and magnesium, as well as ammonia and carbonate.[1]

Protruding tonsilloliths may feel like foreign objects lodged in the tonsil crypt. They may be a nuisance and difficult to remove, but are usually not harmful. They are a cause of halitosis (bad breath).[2][3]

While true tonsillar stones are rare, small areas of calcification or concretions are relatively common.[1]

Tonsilloliths may produce no symptoms, be associated with bad breath, or may produce pain when swallowing.[4]

Tonsilloliths occur more frequently in adults than in children. Many small tonsil stones do not cause any noticeable symptoms. Even when they are large, some tonsil stones are only discovered incidentally on X-rays or CAT scans.

Other symptoms include a metallic taste, throat closing or tightening, coughing fits, and choking.

Larger tonsilloliths may cause multiple symptoms, including recurrent halitosis, which frequently accompanies a tonsil infection, sore throat, white debris, a bad taste in the back of the throat, difficulty swallowing, ear ache, and tonsil swelling.[5] A medical study conducted in 2007 found an association between tonsilloliths and bad breath in patients with a certain type of recurrent tonsillitis. Among those with bad breath, 75% of the subjects had tonsilloliths, while only 6% of subjects with normal halitometry values (normal breath) had tonsilloliths. A foreign body sensation may also exist in the back of throat. The condition may also be an asymptomatic condition, with detection upon palpating a hard intratonsillar or submucosal mass.

The exact cause of tonsilar stones is not known.[1]

Tonsilloliths or tonsil stones are calcifications that form in the crypts of the palatal tonsils. They are also known to form in the throat and on the roof of the mouth. Tonsils are filled with crevices where bacteria and other materials, including dead cells and mucus, can become trapped. When this occurs, the debris can become concentrated in white formations that occur in the pockets.[5] Tonsilloliths are formed when this trapped debris combines and hardens, or calcifies. This tends to occur most often in people who suffer from chronic inflammation in their tonsils or repeated bouts of tonsillitis.[5] They are often associated with post-nasal drip. These calculi are composed of calcium salts such as hydroxyapatite or calcium carbonate apatite, oxalates and other magnesium salts or containing ammonium radicals, macroscopically appear white or yellowish in color, and are usually of small size - though there have been occasional reports of large tonsilloliths or calculi in peritonsillar locations. Many people have small tonsilloliths that develop in their tonsils, and it is quite rare to have a large and solidified tonsil stone.

Much rarer than the typical tonsil stones are giant tonsilloliths. Giant tonsilloliths may often be mistaken for other oral maladies, including peritonsillar abscess, and tumours of the tonsil.[6] 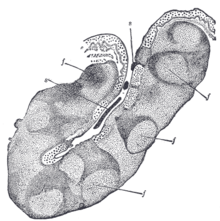 Low-power microscope magnification of a cross-section through one of the tonsillar crypts (running diagonally) as it opens onto the surface of the throat (at the top). Stratified epithelium (e) covers the throat's surface and continues as a lining of the crypt. Beneath the surface are numerous nodules (f) of lymphoid tissue. Many lymph cells (dark-colored region) pass from the nodules toward the surface and will eventually mix with the saliva as salivary corpuscles (s).

The mechanism by which these calculi form is subject to debate,[1] though they appear to result from the accumulation of material retained within the crypts, along with the growth of bacteria and fungi – sometimes in association with persistent chronic purulent tonsillitis.

Recently, an association between biofilms and tonsilloliths was shown. Central to the biofilm concept is the assumption that bacteria form a three dimensional structure; dormant bacteria being in the center to serve as a constant nidus of infection. This impermeable structure renders the biofilm immune to antibiotic treatment. By use of confocal microscopy and microelectrodes, biofilms similar to dental biofilms were shown to be present in the tonsillolith, with oxygen respiration at the outer layer of tonsillolith, denitrification toward the middle, and acidification toward the bottom.[7]

Diagnosis is usually made upon inspection. Differential diagnosis of tonsilloliths includes foreign body, calcified granuloma, malignancy, an enlarged styloid process or rarely, isolated bone which is usually derived from embryonic rests originating from the branchial arches.[8]

Tonsilloliths are difficult to diagnose in the absence of clear manifestations, and often constitute casual findings of routine radiological studies.

Often, no treatment is needed, as few stones produce symptoms.[10]

A simple yet effective method to remove tonsil stones and thoroughly clean the tonsil crypts is to use an oral irrigator. Most electric oral irrigators are unsuitable for tonsil stone removal because they are too powerful and are likely to cause discomfort and rupture the tonsils, which could result in further complications such as infection. Irrigators that connect directly to the sink tap via a threaded attachment or otherwise are suitable for tonsil stone removal and everyday washing of the tonsils because they can jet water at arbitrarily low pressure levels that the user can adjust by simply turning the sink tap, allowing for a continuous range of pressures to suit each user's specific requirements.

Larger tonsil stones may require removal by curettage or otherwise, although thorough irrigation will still be required afterwards to effectively wash out smaller pieces. Larger lesions may require local excision although these treatments may not completely help the bad breath issues that are often associated with this condition.

Another option is to decrease the surface area (crypts, crevices, etc.) of the tonsils via laser resurfacing. The procedure is called laser cryptolysis. It can be performed using a local anesthetic. A scanned carbon dioxide laser selectively vaporizes and smooths the surface of the tonsils. This technique flattens the edges of the crypts and crevices that collect the debris, preventing trapped material from forming stones.

Tonsillectomy may be indicated if bad breath due to tonsillar stones persists despite other measures.[11]

Tonsilloliths or tonsillar concretions occur in up to 10% of the population, frequently due to episodes of tonsillitis.[12] While small concretions in the tonsils are common, true tonsilloliths or stones are rare.[1] They commonly occur in young adults and are rare in children.[1]