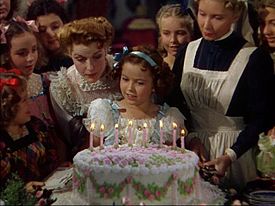 Shirley Temple in The Little Princess, circa 1939.

The term child actor or child actress is generally applied to a child acting in motion pictures or television, but also to an adult who began his or her acting career as a child; to avoid confusion, the latter is also called a former child actor. Closely associated is teenage actor, an actor who reached popularity as a teenager.

In the United States, the activities of child actors are regulated by the governing labor union, if any, and state and federal laws. Some projects film in remote locations specifically to evade regulations intended to protect the child. Longer work hours or risky stunts prohibited in California, for example, might be permitted to a project filming in British Columbia. US federal law "specifically exempted minors working the Entertainment Business from all provisions of the Child Labor Laws." Any regulation of child actors is governed by disparate state law.

Due to the large presence of the entertainment industry in California, it has some of the most explicit laws protecting child actors. Being a minor, a child actor must secure an entertainment work permit before accepting any paid performing work. Compulsory education laws mandate that the education of the child actor not be disrupted while the child is working, whether the child actor is enrolled in public school, private school or even home school. The child does his/her schoolwork under the supervision of a studio teacher while on the set.

Additionally, the hours a child actor may work are limited. Generally, stricter time limits are imposed for younger actors. A very young infant might be allowed "under the lights" only a few minutes a day. It is common in television production for the role of a young child to be portrayed by identical twins or triplets to reduce each child's time on set. When the child turns 18, the legal limits on work time are lifted.[citation needed]

Many child actors never got to see the money they earned. Jackie Coogan earned millions of dollars from working as a child actor only to see most of it squandered by his parents. In 1939, California weighed in on this controversy by enacting the Coogan Law which requires a portion of the earnings of a child actor to be preserved in a special savings account called a blocked trust.

Some people also criticize the parents of child actors for allowing their children to work, believing that more “normal” activities should be the staple during the childhood years. Others observe that competition is present in all areas of a child’s life—from sports to student newspaper to orchestra and band—and believe that the work ethic instilled or the talent developed accrues to the child’s benefit.

The child actor may experience unique and negative pressures when working under tight production schedules. Large projects which depend for their success on the ability of the child to deliver an effective performance add to the pressure.

Many actors' careers are short-lived, and this is also true of child actors. Peter Ostrum, for example, is now a successful large-animal veterinarian after a starring role in Willy Wonka & the Chocolate Factory. Most notably, Shirley Temple became a successful public figure and diplomat, eventually becoming U.S. Ambassador to Ghana, then United States Department of State Chief of Protocol under the Nixon Administration, and then in the late 1980s U.S. Ambassador to Czechoslovakia. Brandon Cruz is a successful punk rocker, after a co-starring role in The Courtship of Eddie's Father, Jenny Lewis, formerly of Troop Beverly Hills, is a well-known indie rock musician, and Kirk Cameron, star of Growing Pains, is now a minister of Ray Comfort's evangelist ministry The Way of the Master.

However, often with the benefit of responsible parenting to ensure they matured properly, there are child actors who have achieved successful thespian careers into adulthood. These have included Jodie Foster, whose adult career has earned her two acting Academy Awards, Roddy McDowall, who had a long distinguished career including as the regular star of the Planet of the Apes series and Ron Howard, who, in addition to being the star of the long running Happy Days television series, became an Oscar-winning director in adulthood.

It has been seen in many cases that the failure to retain stardom and success has caused many child actors to lead adult lives plagued by legal troubles, bankruptcy, and drug abuse. Examples include the cast members of the American sitcom Diff'rent Strokes, which starred child actors Todd Bridges, Gary Coleman, and Dana Plato.

Plato went on to pose for Playboy magazine and was featured in several softcore pornography films. She was arrested twice for armed robbery and forging prescriptions. She died in May 1999 from an overdose of prescription medication, deemed suicide.

Coleman famously sued his parents for misuse of his trust fund and, although awarded over $1,000,000, filed for bankruptcy in 1999. After many charges of assault throughout the next years, Coleman died in May 2010.

Bridges was plagued with many legal troubles as well as an addiction to cocaine. After breaking this habit, he traveled across the US, touring schools and warning about the dangers of drug abuse. He has since made several cameo appearances on multiple television programs.

The popular television sitcom Full House made child stars out of Jodie Sweetin and the Olsen twins. After the show, Sweetin went on to develop an addiction to methamphetamine, as well as alcoholism. She later overcame this and wrote a memoir describing her experiences. Mary-Kate Olsen developed an eating disorder , for which she was treated with intensive rehab.