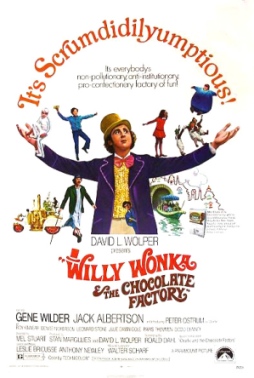 
"Willy Wonka & the Chocolate Factory" is a 1971 motion picture based on the 1964 novel "". It starred in the title role, and was directed by . The film received an nomination for Best Original Score.

is a poor but good-hearted boy living with his widowed mother and four bedridden grandparents in a tiny, ramshackle house; Mrs. Bucket works in a laundry while Charlie supplements the meager family income by delivering newspapers after school. The family, along with the rest of the world, learns that the famously reclusive chocolate maker, Mr. , has hidden five s amongst his billions of s. The finders of these special tickets will be given a full tour of his world-renowned candy factory – the inner workings of which are a tightly kept secret – along with a lifetime supply of chocolate.

Charlie wants to take part in the search, but cannot afford to buy vast quantities of chocolate like most other participants. Four of the tickets are quickly found by , an overweight German boy; , a spoiled English girl; , a gum-chomping American girl; and (spelled "Teevee" in the film), a television-obsessed American boy. Charlie's hopes seem finally dashed when news breaks that the final ticket has been found by a Paraguayan millionaire.

As the Golden Ticket craze dies down, Charlie finds a silver dollar in a gutter and uses it to buy two Wonka Bars. Simultaneously, word then spreads that the millionaire's ticket was forged. Charlie opens his second bar to find the true final ticket, and races home to tell his family but is stopped by a person claiming to be , a rival confectioner who offers Charlie a large sum of money in exchange for a sample of Wonka's latest creation, the (a hard candy that can be sucked forever without dissolving or losing flavor), a similar deal that he made to each of the other Ticket winners.

An excited manages to get out of bed in order to serve as Charlie's tour chaperone. The very next day, Wonka greets the children and their guardians at the factory gates and leads them inside, requiring each to sign a contract before the tour can begin. Inside is a psychedelic wonderland full of chocolate rivers, giant edible mushrooms, lickable wallpaper, other ingenious inventions, and Wonka's workers, the small orange-tinted men known as .

However, as the tour progresses, each of the first four children misbehave against Wonka's weak warnings, resulting in serious consequences. Augustus is sucked through a chocolate extraction pipe system and into the Fudge Room after trying to drink from a chocolate river. Violet transforms into a giant blueberry after trying a problematic experimental piece of Three-Course-Dinner Gum. Veruca is rejected as a "bad egg" and sent plummeting down a garbage chute in the Chocolate Golden Egg Sorting Room after unsuccessfully trying to get her father to buy her one of the egg-laying geese, and then attempting to take one for herself. Mike is shrunk down to only a few inches after being transmitted by "Wonkavision," a broadcasting technology that can send objects through television instead of pictures. The Oompa-Loompas sing a song after each mishap, describing that particular child's poor behavior.

Charlie also succumbs to temptation along with Grandpa Joe, as they stay behind in the Bubble Room and sample Fizzy-Lifting Drinks. They begin floating skyward and are in danger of being cut to shreds by a large ceiling-mounted fan; to avoid this grisly fate, they both burp repeatedly until they return to the ground. Wonka initially seems completely oblivious to this incident.

The assumption is that Charlie has won the grand prize after he becomes the last remaining child on the tour. However, Wonka politely dismisses them and hastily disappears into his office. Grandpa Joe and Charlie enter Wonka's office (every single item therein is cut in half) to investigate. Grandpa inquires about Charlie's lifetime chocolate supply prize, and Wonka irritably points out the forfeiture clause of the contract Charlie and the other four winners had signed at the start of the tour. Charlie was therefore ineligible for the grand prize due to his part in the theft of the Fizzy-Lifting Drinks, and Wonka apoplectically dismisses them both.

Grandpa Joe harshly denounces Wonka for "building up [Charlie's] hopes and then smashing all his dreams to pieces," and vows to give Slugworth the Gobstopper in revenge. Charlie, however, cannot bring himself to betray Wonka and quietly leaves the candy on his desk. Wonka recants his penalty and euphorically awards Charlie the grand prize. He begs his guests' forgiveness after revealing that "Slugworth" was actually an employee named Wilkinson, and that his offer to buy the Gobstopper, along with Wonka's own stern façade in the office, served as a test for Charlie.

Charlie's grand prize is reinstated, but that's only the beginning. As the trio soar over the city in the "Wonkavator," an airborne, multidirectional glass elevator, Wonka tells Charlie that his actual jackpot is the factory itself, as the Golden Ticket search was conceived to help Wonka search for an honest and worthy child to be the heir to his chocolate empire. Charlie and his family will now reside in the factory, and eventually take over its operation. As the Wonkavator sails off into the sky, Wonka tells Charlie to "never forget the story of the man who got everything he ever wanted…he lived happily ever after."

The idea for adapting the book into a film came about when director Mel Stuart's 10-year-old daughter read the book and asked her father to make a movie out of it, with "Uncle Dave" (producer ) producing it. Stuart showed the book to Wolper, who happened to be in the midst of talks with the regarding a vehicle to introduce a new candy bar. Wolper convinced the company, who had no previous experience in the film industry, to buy the rights to the book and finance the picture for the purpose of promoting a new Quaker Oats "Wonka Bar."

It was agreed that the film would be a children's musical, and that Dahl himself would write the screenplay. However, the title was changed to "Willy Wonka and the Chocolate Factory" in order to promote the aforementioned candy tie-in, and also because of the United States' continued involvement in the at the time; "Charlie" was a nickname for the .

Screenwriter conceived a gimmick exclusively for the film that had Wonka quoting numerous literary sources, such as 's "Ode", 's "", and 's "". Seltzer also worked Slugworth (only mentioned as a rival candy maker in the book) into the plot as an actual character.

Dahl, who had rights to the film production, unsuccessfully pushed for to play Willy Wonka. [ [http://www.imdb.com/title/tt0067992/trivia Willy Wonka & the Chocolate Factory Trivia - Internet Movie Database ] ] His next choice, , rejected the part. also turned down the role due to ongoing commitments to "". Also initially considered was Broadway star , who ultimately was rejected due to his small physical stature. Auditions were held for a week in New York City's , where was immediately awarded the role. Wilder said that he would only do the movie if Wonka first appeared onscreen coming out of the factory hobbling with a cane, only to then lose it and do a somersault. Further auditions were held in New York, and to fill the parts of the other children and their parents.

Filming commenced on , and ended on , . The primary shooting location was Munich, because it was significantly cheaper than filming in the U.S., and the setting was conducive to Wonka's factory. Stuart also liked the ambiguity and unfamiliarity of the location. External shots of the factory were filmed at the Munich Gaswerks; the flats and clocktower still exist.

Production designer centered the factory around the massive Chocolate Room. The two-foot deep chocolate river and waterfall were created by adding chocolate ice cream mix to 150,000 gallons of water, which eventually created a foul odor that permeated the entire soundstage. In the meantime, Quaker Oats had abandoned the production of their version of a Wonka Bar after several failed attempts.

"Willy Wonka" was released on , , and earned a positive response from moviegoers, but box office figures were less than desirable due to lack of promotion. As a result, it was the fifty-third highest grossing film of the year in the U.S., earning approximately $4 million. Even though the film received positive reviews from critics such as [ [http://rogerebert.suntimes.com/apps/pbcs.dll/article?AID=/19710101/REVIEWS/50720001/1023 :: rogerebert.com :: Reviews :: Willy Wonka and the Chocolate Factory (xhtml) ] ] and Wilder would later earn a Golden Globe nomination for his performance, Dahl was displeased with the final product and refused to sell the rights to the sequel, "". Seeing no significant financial advantage, decided against renewing its distribution deal for the film when it expired seven years later. Paramount sold the rights to in 1977.

By the mid-seventies, the picture had experienced a spike in popularity thanks in large part to repeated television broadcasts and home video sales. It was first released on in 1997, allowing it to reach a new generation of viewers, and was rereleased as a remastered special edition on DVD and again in 2001 in order to commemorate the film's 30th anniversary.

A special edition DVD was released in 2001, celebrating the film's 30th anniversary. It was also released on VHS, with only one of the special features (a making of feature). Several original cast members reunited to film documentary footage for this special edition DVD release. The two editions featured restored sound, and better picture quality. The DVD consisted of the following features:

The Academy Award-nominated original score and songs were composed by and , and musical direction was by . The soundtrack was first released on Paramount Records in 1971.