Evacuations of civilians in Britain during World War II

Evacuations of civilians in Britain during World War II 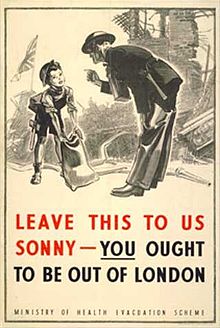 The British government advertised the evacuation programme through posters, among other means. The poster depicted here was used in the London Underground.

Evacuation of civilians in Britain during the Second World War was designed to save the population of urban or military areas in the United Kingdom from aerial bombing of cities and military targets such as docks. Civilians, particularly children, were moved to areas thought to be less at risk. Evacuees wore their best clothes when being evacuated. Operation Pied Piper on 1 September 1939, prior to the Battle of Britain, officially relocated more than 3.5 million people. Further waves of official evacuation and re-evacuation occurred from the South and East coast in June 1940, when a seaborne invasion was expected, and from affected cities after the Blitz began in September 1940. There were also official evacuations from the UK to other parts of the British Empire, and many non-official evacuations within and from the UK. Other mass movements of civilians included British citizens arriving from the Channel Islands, and displaced people arriving from continental Europe.

The Government Evacuation Scheme was developed during the summer of 1938 by the Anderson Committee and was implemented by the Ministry of Health. The country was divided into zones, classified as either "evacuation", "neutral", or "reception", with priority evacuees being moved from the major urban centres and billeted on the available private housing in more rural areas. Each area covered roughly a third of the population, although several urban areas later bombed were not classified for evacuation. In early 1939, the reception areas compiled lists of available housing. Space for roughly 4.8 million people was found, and the government also constructed camps for a few thousand additional spaces.

In the summer of 1939, the government began publicizing its plan through the local authorities. They had overestimated demand; only half of all school-aged children were moved from the urban areas instead of the expected 80%. There was enormous regional variation of more than 15% of their children, while over 60% of children were evacuated in Manchester and Liverpool. The refusal of the central government to spend large sums on preparation also reduced the effectiveness of the plan. In execution over 1,474,000 people were evacuated.

Official evacuation was declared on August 31, but began on September 1, two days before the declaration of war. From London and the other main cities, the priority class people boarded trains and were dispatched to rural towns and villages in the designated areas. With the uncertainties over registering for evacuation, the actual movement was also disjointed—evacuees were gathered into groups and put on the first available train, regardless of its destination. School and family groups were further separated in the transfer from mainline trains to more local transport. Accordingly, some reception areas became overwhelmed. East Anglian ports received many children evacuated from Dagenham. Some reception areas received more than the expected number of evacuees and others found themselves receiving people from a priority group or social class different to the one they had prepared for.

Almost 3.75 million people were displaced, with around a third of the entire population experiencing some effects of the evacuation. In the first three days of official evacuation, 1.5 million people were moved-827,000 children of school-age; 524,000 mothers and young children (under 5); 13,000 pregnant women; 7,000 disabled persons and over 103,000 teachers and other 'helpers'.[1] Host keepers were often put to inconvenience, especially by many children who seemed to be vulnerable to stress symptoms such as enuresis and other ailments (some estimates have been put between 4% and 33%).[2]

A further two million or so[citation needed] more wealthy individuals evacuated 'privately', some settling in hotels for the duration and several thousand travelling to Canada, the United States, South Africa, Australia and the Caribbean.

Other prominent groups also evacuated. Art treasures were sent to distant storage; the National Gallery collection spent the war at a quarry in North Wales. The Bank of England moved to the small town of Overton and in 1939-1940 moved 2,154 tons of gold to the vaults of the Bank of Canada in Ottawa.[3][4] The BBC moved variety production to Bristol and moved senior staff to a manor near Evesham. Many senior Post Office staff were relocated to Harrogate. Some private companies moved head offices or their most vital records to comparative safety away from major cities.

The government also undertook measures to save itself. Under "Plan Yellow",[5][6] some 23,000 civil servants and their paperwork were dispatched to available hotels in the better coastal resorts and spa towns. Other hotels were requisitioned and emptied for a possible last ditch "Black Move"[5][6] should London be destroyed or threatened by invasion. Under this plan, the nucleus of government would relocate to the West Midlands—the War Cabinet would move to Hindlip House near Worcester and Parliament to Stratford-upon-Avon.[7]

Some strained areas took the children into local schools by adopting the World War I expedient of double shift education—taking twice as long but also doubling the number taught. The movement of teachers also meant that almost a million children staying home had no source of education.

A second evacuation effort was started after the fall of France. From 13 June to 18 June 1940, around 100,000 children were evacuated (in many cases re-evacuated). Efforts were made to remove the vulnerable from coastal towns in southern and eastern England facing German controlled areas. By July, over 200,000 children had been moved; some towns in Kent and East Anglia evacuated over 40% of the population. Also, some 30,000 people arrived from continental Europe and, on 20 June–24 June 25,000 people arrived from the Channel Islands.

Men of German (and later Italian) origin were interned from 12 May 1940. Many interned were refugees from Adolf Hitler. By July, almost all of these men under seventy were held in military camps, mainly on the Isle of Man. At first, unnecessary mistreatment was common. These conditions were soon reversed. For many interned persons the conditions in the camps were not especially unpleasant.

In May 1940, the Children's Overseas Reception Board (CORB) was created to organise the evacuation of children to the Dominions, primarily Canada, plus South Africa, Australia and New Zealand. A surprising 210,000 applications were made by July when the scheme closed. However, shipping shortages quickly slowed the evacuation. After the sinking of the City of Benares on 17 September 1940, the entire plan was scrapped. Only 2,664 children were moved. About 13,000 children had been privately evacuated overseas.

When the Blitz began in September 1940, there were clear grounds for evacuations. Free travel and billeting allowance were offered to those who made private arrangements. They were also given to children, the elderly, the disabled, pregnant women, the ill or those who had lost their homes (some 250,000 in the first six weeks in London). By the combination of all the state and private efforts, London's population was reduced by a little less than 25%. As bombing encompassed more towns, 'assisted private evacuation' was extended.

London proved resilient to bombing despite the heavy bombardment. The destruction in the smaller towns was more likely to provoke panic and spontaneous evacuations. The number of official evacuees rose to a peak of 1.37 million by February 1941. By September, it stood at just over one million. By the end of 1943, there were just 350,000 people officially billeted. Still, the V-1 attacks from June 1944 provoked a significant exodus from London. Up to 1.5 million people left by September—only 20% were "official" evacuees.

From September 1944, the evacuation process was officially halted and reversed for most areas except for London and the East coast. Returning to London was not officially approved until June 1945. In March 1946, the billeting scheme was ended, with 38,000 people still without homes.

The movement of urban children of all classes to unfamiliar rural locations, without their parents, had a major impact. The Evacuees Reunion Association was formed with the support of the Imperial War Museum. It provides opportunities for former evacuees to contribute and share evacuation experiences and for researchers to request information such as the long term effects of evacuation upon children.

The evacuation has spawned a whole literature of children's and young adult fiction. The convenience of the setting for the writer is clear, allowing the child heroes to have adventures in a strange, new world. Some of the authors, like Nina Bawden, had themselves experienced evacuation.

Novels for adults featuring evacuation and evacuees are: