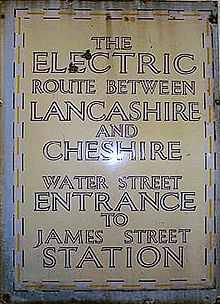 Sign from the Water Street entrance to James Street. 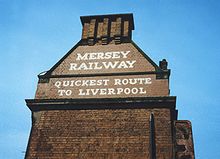 The Mersey Tunnel was designed by Sir Charles Fox, and the design was carried out by his son, Douglas Fox, a Civil Engineer who was joint engineer to the Mersey Tunnel Company (set up in 1866) with James Brunlees. Douglas Fox was later knighted for his work on the project after its official opening by the Prince of Wales, later King Edward VII. Charles Fox & Son, later known as Sir Douglas & Francis Fox is still in existence today trading as Hyder Consulting. 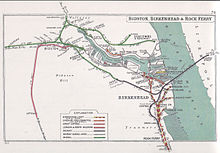 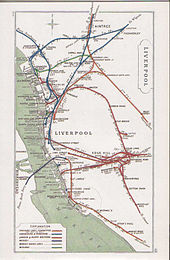 The Mersey Railway opened between Green Lane station in Birkenhead and James Street station in Liverpool in 1886, via Birkenhead Central and Hamilton Square stations, both in Birkenhead. James Street and Hamilton Square station were very deep, so deep only lifts could access the stations. Green Lane and Birkenhead Central stations were below ground level, however in open cuttings. In 1888 a branch to Birkenhead Park station opened, with a connection to the Wirral Railway. This was followed in 1891 by an extension from Green Lane to Rock Ferry with a connection to the Birkenhead Railway. In 1892 the tunnel was extended from James Street to a new Low Level station at Liverpool Central. The total length of the tunnel was 3.12 miles (5029 m) and by 1890 it was carrying 10 million passengers a year.

For the opening of the line, eight powerful 0-6-4T tank locomotives were obtained from Beyer, Peacock and Company. These were fitted with condensing apparatus for working in the tunnel. One of them (number 5 Cecil Raikes) is preserved at the Museum of Liverpool. It is likely that it is named after Henry Cecil Raikes who was Member of Parliament for Preston in 1882. Beyer Peacock built a ninth 0-6-4T locomotive in 1886, along with six 2-6-2T tank locomotives in 1887–1888. A seventh 2-6-2T was built by Kitson & Co in 1892.

In 1903, the railway was electrified, becoming the first underground railway in the world to change over completely from steam to electric power.[4] It was originally electrified with a fourth rail system,[citation needed] which was later replaced by a third rail system. The nearby Liverpool Overhead Railway, the world's first electric overhead railway, had already operated successfully with electric traction since its opening in 1893.[5]

The Mersey Railway electric trains ran from Liverpool Central to Birkenhead Park and to Rock Ferry, where passengers to points beyond would change. In 1938 the LMS electrified from Birkenhead Park to New Brighton and to West Kirby, and built new trains which ran through to Liverpool. Normally new LMS trains handled the West Kirby route and Mersey Railway trains handled the New Brighton service, as well as the existing Rock Ferry operation. In 1948, on nationalisation of the railways, the Mersey Railway became known as the London Midland Region Mersey section and the old cars were renumbered in the British Railways sequence. In 1956 these trains were life-expired and replaced by further trains built to the LMS 1938 design, the last of the American-designed cars being phased out a year later.

The tunnel and railway are still in use today as part of the Wirral Line of the Merseyrail commuter rail network.