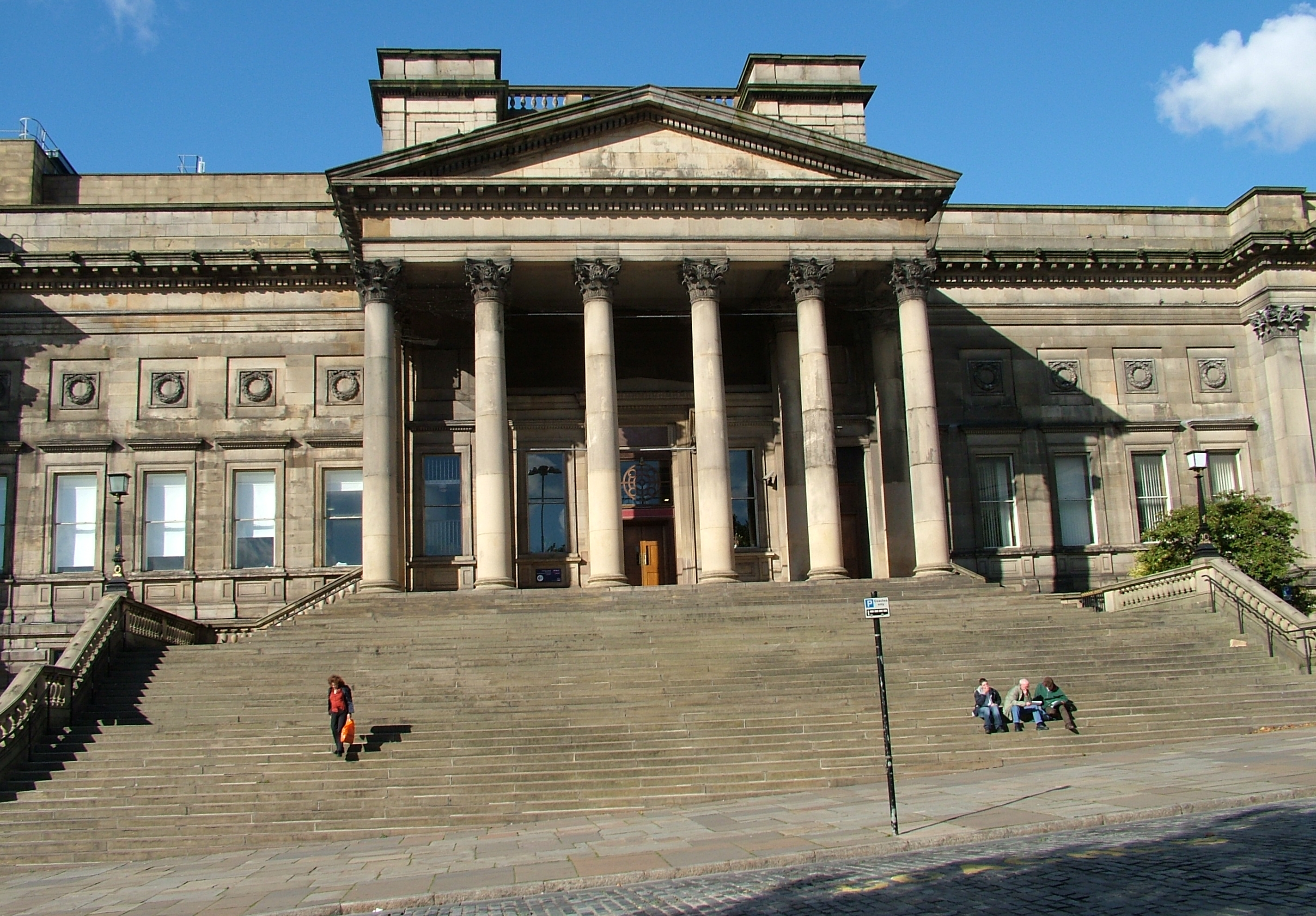 World Museum Liverpool is a large in , which has extensive collections covering archaeology, ethnology and the natural and physical sciences. Special attractions include the Natural History Centre and a free Planetarium. Entry to the museum itself is also free.

The museum has recently undergone extensive refurbishment in order to double the size of the display spaces, making even more of the collections accessible for visitors. Major new galleries include "World Cultures", the "Bug House" and the "Weston Discovery Centre". A central entrance hall and six-storey atrium opened in 2005. On reopening after this refurbishment and extension the museum's name changed from its previous title of 'Liverpool Museum', which it has held since its establishment at its current site in 1860.

The museum is part of .

The museum was originally started as the "Derby Museum" as it comprised the 's collection. The museum opened originally in , sharing two rooms on "Duke Street" with a library. However, the museum proved extremely popular and a new, purpose-built building was required.

Land for the new building on a street then known as "Shaw's Brow" opposite St. George's Hall was donated by local MP and Merchant William Brown, as was much of the funding for the building which would be known as the . Around 400,000 people attended the opening of the new building in 1860.

In the late 1800s, the museum's collection was beginning to outgrow its building so a competition was launched to design a combined extension to the museum and college of technology. The competition was won by William Mountford and the opened in 1901.

Liverpool, being one of the UK's major ports, was heavily damaged by German bombing during the blitz. While much of the Museum's collection was moved to less vulnerable locations during the war, the museum building itself was struck by German firebombs and suffered heavy damage. Parts of the museum only began to reopen fifteen years later.

In the early 2000s, the museum was again expanded, taking over the lower half of the extension which was then owned by . To better reflect its larger size, the museum was renamed "World Museum Liverpool".

The collection contains approximately 15000 objects from and and is the most important single component of the Antiquities department's collections. The chronological range of the collection spans from the Prehistoric to the Islamic Period with the largest archaeological site collections being Abydos, , , and .

Over 5000 Egyptian antiquities were donated to the museum in 1867 by [http://www.liverpoolmuseums.org.uk/online/collectors/josephmayer.asp Joseph Mayer] (1803-1886), a local goldsmith and antiquarian. Mayer purchased collections from Joseph Sams of Darlington (which contained material from the Henry Salt sale in 1835), Lord Valentia, Bram Hertz and the Reverend Henry Stobart. Mayer had displayed his collection in his own ‘Egyptian Museum’ in Liverpool with a purpose of giving citizens who were unable to visit the British Museum in London some idea of the achievements of the Egyptian civilization. On the strength of this substantial donation other people began to donate Egyptian material to the museum, and by the later years of the nineteenth century the museum had a substantial collection that described as being the most important collection of Egyptian antiquities in England next to the contents of the .

The quality of the Mayer donation is high and there are some outstanding items, but with a few exceptions the entire collection is unprovenanced. The collection was systematically enhanced through subscription to excavations in Egypt. Altogether the museum subscribed to 25 excavations carried out by the (now [http://www.ees.ac.uk Egypt Exploration Society] ), the British School of Archaeology in Egypt, and the Egyptian Research Account between 1884 and 1914. It was further developed through links with the Institute of Archaeology at [http://www.liv.ac.uk/sace Liverpool University] and important collections came to the museum from the excavations of who was honorary reader in Egyptian archaeology at Liverpool University 1902–07, and Professor of Methods and Practice of Archaeology 1907–41. The museum has always had a close relationship with the university; in the early 1920’s Percy Newberry, Brunner Professor of Egyptology, and his successor T. Eric Peet, catalogued the collection, assisted with the rearrangement of the displays, and produced a handbook and guide to the Egyptian collection (1st ed., 1923).

In May 1941, at the height of the , a bomb fell on the museum, which was burnt to a shell. Large parts of the collection had been removed at the outbreak of the war, but much remained on display or in store and many artefacts were destroyed. What remained was quite inaccessible and it was not until 1976 that a permanent Egypt gallery was opened in the rebuilt museum. Following the war the museum actively augmented the collection through collecting of new material from excavations in Egypt and Sudan and the purchase of other museum collections. In 1947 and 1949 the material from Garstang’s excavations at Meroe came to the museum, and in 1955 Liverpool University placed substantial amounts from its own collections within the museum, including many items from Beni Hasan and Abydos. In 1956 the museum purchased almost the entire non-British collections of the . This included EES excavated material from Amarna and other sites, botanical remains from and the private collection of . In 1973 the collection was increased further by the acquisition of part of the Collection, and by the bequest of Colonel J. R. Danson in 1976, which included more material from Amarna and from Garstang’s excavations at Abydos.

For details of the collection including an image and catalogue entry for 1500 objects, see the searchable online catalogue at [http://www.globalegyptianmuseum.com Global Egyptian Museum] .A handy lavishly illustrated guide to the collection is also available: ‘Gifts of the Nile’ (London: HMSO, 1995).

Following a successful application to the Museums & Galleries Improvement Fund [http://www.culture.gov.uk/what_we_do/Museums_galleries/wolfson.htm] of the and the the museum will be opening a new Egypt gallery in August 2008. The project with a total budget of £600,000 aims to build on the success of the hugely popular World Museum Liverpool by revitalising the Egyptian gallery, which is now 30 years old.

The collection at World Museum Liverpool, ranks among the top six collections in the country, the four main areas represented are: , the Americas, Oceania and . The exhibition includes displays.

In the Natural World area can be seen a range of exhibits, including live colonies of insects and historic and exhibits.

The 13th Earl of Derby founded the original museum with a major donation of zoological specimens in 1851, including many rare and ‘type’ specimens, the ones that act as standards for the species.

The museum’s collections have grown considerably since then and now also include important botanical specimens dating back over 200 years, which represent most of Britain and Ireland’s native flora.

Visitors can examine the collections up close in the award winning Clore Natural History Centre, where there are interactive displays.

The geological collection at World Museum Liverpool contains over 40,000 fossils as well as extensive rock and mineral collections. Each of these exhibits show information about the origins, structure and history of the planet Earth.

Founded in 1858, only seven years after the museum's establishment, much of the original collection was destroyed during the Second World War. The post-war collections have expanded considerably, thanks in part to the acquisition of several significant museum and university collections.

The largest of these was the 's geological collection that includes some 6,600 specimens. The collection covers the following areas: , and
.

The physical sciences collection of World Museum Liverpool was built after the devastation caused by the incendiary fire of 1941. The collection has expanded, in part, due to transfers from the Decorative Arts Department, Regional History Department, and the Prescot Museum. The collection also contains several significant collections from the Liverpool Royal Institution, Bidston Observatory, later the Proudman Institute of Oceanographic Sciences, and the Physics Department of the University of Liverpool.

Collections such as these are often made up of items of a singular type designed for a particular experiment such as DELPHI or LEP at CERN - the European Organisation for Nuclear Research, or the Equatorium, a post-Copernican planetary calculator made to special order in the early 17th century. As a consequence the collection is small but contains a number of significant items.

The planetarium opened in 1970 and has 62 seats. It currently attracts about 45,000 people per year. Shows cover various aspects of space science, including the Solar System, space exploration and has special children's shows. Entrance to the planetarium is free.

The museum has been the site of three deaths since its reopening as the World Museum Liverpool. On the , a 24 year old man climbed over a balcony on the sixth floor and jumped to his death. On the , a 17 year old mother was stabbed to death by her 21 year old former male partner, who then jumped to his death from a third floor balcony. The coroner has since recorded verdicts of unlawful killing and suicide. [ [http://news.bbc.co.uk/1/hi/england/merseyside/6298751.stm "Stabbed mother 'cried for help'"] , BBC, . Retrieved .]