The Suzuki Swift is a subcompact car produced by Suzuki in Japan since 2000. Prior to this, the "Swift" nameplate had been applied to the Suzuki Cultus in export markets such as Australasia, Europe, India and North America.

The Suzuki Swift began as a marketing and manufacturing rebadge of the Suzuki Cultus, a supermini (or subcompact) manufactured and marketed worldwide across three generations and four body configurations—three-door hatchback, four-door sedan, five-door hatchback and two-door convertible—and using the Suzuki G engine family.

The Swift was marketed in the Japanese domestic market (JDM) as the Cultus and elsewhere as the Suzuki Forsa, Suzuki Jazz, Chevrolet Swift, Chevrolet Sprint and Sprint Metro, Geo and Chevrolet Metro, Pontiac Firefly, Maruti 1000, Holden Barina and Subaru Justy. Versions of the second generation Cultus were also produced until 2007 in India and the car remains in production today in Pakistan.

The first generation Swift was introduced in 2000 as a replacement for the Suzuki Cultus. Outside of Japan, the "Suzuki Ignis" name was used. Both three- and five-door hatchback body styles were offered, although the three-door was not offered as part of the regular lineup in Japan. 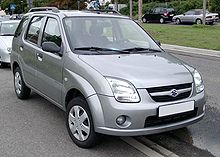 The Swift was powered by a new generation of Suzuki inline-four gasoline engines, the M family. Engine displacements of 1.3 and 1.5-litres were offered, both with a five-speed manual transmission or optional four-speed automatic. The vehicle was available with either front or four-wheel drive. Vehicles fitted with the 1.3-litre engine were designated HT51S, with the 1.5-litre version assigned HT81S.[1]

The shorter three-door body variant formed the basis of the Swift Sport in Japan, or Ignis Sport in export markets. Introduced in 2003, it featured redesigned bumpers, and was fitted with a higher-output version of the 1.5-litre engine. The Sport ceased production in 2005, with the regular Swift models remaining until 2006 for the Japanese market only.

In 2001, General Motors introduced the Chevrolet Cruze—a crossover SUV based on the Swift, retaining the original car's basic dimensions and powerplants. The Cruze was restyled, adopting a crossover look between a tall hatchback and a sport utility vehicle, and the three-door body was dropped. The "Chevrolet Cruze" commercial designation was used in Japan, while in Australia the car was sold as the "Holden Cruze" from 2002 to 2006. The 1.3-litre cars were given the model code HR51S, with the 1.5-litre versions coded HR81S.[2][3]

Suzuki in Europe introduced the Cruze modifications as an update of the Ignis in 2003, although extended by 145 millimetres (5.7 in) in length, thus improving interior and luggage dimensions. Due to an agreement with Subaru, this model was also sold throughout Europe in all-wheel drive form as the Subaru Justy from 2003. These Europe-only models were manufactured by Magyar Suzuki in Hungary. Due to the local presence of the Chevrolet-badged model, Suzuki in Japan did not utilise the modifications for a Suzuki-badged model of its own.

The second generation Swift debuted at the Paris Motor Show in September 2004. The design of the new Swift was previewed on the Concept S and Concept S2 concept cars at auto shows, in the years leading up to its launch. This generation of the Swift marked a significant departure with the previous Cultus-based models, with Suzuki redesigning the vehicle as less of a "low price alternative" subcompact and more of a "sporty" subcompact.[5] The Swift's design and driving characteristics focused on the European market with its chassis refined through a road-testing program across Europe.[6] 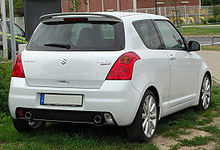 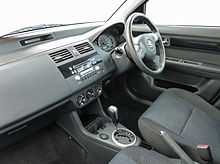 The Swift was available with 1.3- and 1.5-litre petrol engines, rated at 92 metric horsepower (68 kW; 91 hp) and 102 metric horsepower (75 kW; 101 hp), respectively. It was produced in Hungary, India, Japan, Pakistan and by Chang'an Motors in China. In China and Japan, only the five-door body is available, and four-wheel drive is an option for the 1.3- and 1.5-litre petrol engines. A 1.2-litre engine fitted with an automatic continuously variable transmission (CVT) transmission was offered as in front-wheel drive only. In Europe, the Swift was launched in three- or five-door hatchback forms, with 1.3- and 1.5-litre petrol engines, and a 1.3-litre DDiS engine supplied by Fiat. The 1.3 petrol is also available with an automated manual transmission or with four-wheel drive.

The second generation Swift has received a four stars out of five rating in the Euro NCAP crash tests.[7] It also was awarded 2006 Semperit Irish Car of the Year in Ireland.

Since its global launch in 2005, which was kicked off with a marketing campaign fronted by the footballer Cristiano Ronaldo in many European countries, the Swift has recorded above forecast sales in most markets. In Japan, sales figures have been twice the forecast and in many European markets the model has been a runaway success.

In India, Suzuki has launched Swift as a joint venture with Maruti and the car is known as Maruti Suzuki Swift. In the Indian auto market Swift is available with seven variants four with petrol and three with diesel engine option. The petrol version of Maruti Swift is powered by 1.2-litre K-series engine (with a 1.3-litre petrol engine available utill 2008). Maruti Swift is endowed with five-speed manual transmission. However, the diesel version of Maruti Swift is packed with 1.3-litre, DDiS engine(borrowed & licensed by Suzuki from FIAT's renowned Multijet technology) with a displacement of 1,248 cc. The 1.3-litre diesel engine is fitted with a turbocharger and intercooler combination and is endowed with a five-step multi injection common rail system.

Suzuki introduced a sedan based version of the Swift called the "Maruti Swift Dzire" in the Indian market. Launched on March 26, 2008, Swift DZire replaces Maruti Suzuki’s popular entry level sedan, Maruti Suzuki Esteem, production of which was discontinued in late 2007. Maruti Suzuki has introduced Swift DZire only in the Indian market. The Dzire has exactly the same wheelbase as the hatchback version and has an increased overall length due to the addition of the boot. It shares the same 1.2-liter K-series gasoline and 1.3-liter DDIS diesel engines fitted to the hatchback variant.

Swift DZire is a result of an indigenous project started in 2005 to design a three-box notchback version of the Swift hatchback. Some changes have been made to the car’s overall styling to seamlessly integrate the boot. The wheelbase remains the same. The car weighs about 30–35 kilograms (66–77 lb) more than the hatchback. Few modifications in the rear suspension have been done to cope with the additional weight of the boot and improve the ride quality for the rear passengers. Adjustments in the rear seat inclination have been made to improve the rear seat comfort and legroom. 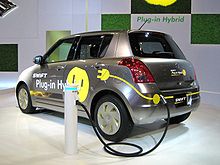 The Suzuki Swift Plug-in Hybrid concept car was unveiled at the 2009 Tokyo Motor Show. The Swift Plug-in concept has an all-electric range of about 30 km (19 mi) drawing on a lithium-ion battery pack. When the battery is running low a small 0.66 L engine kicks in to power a generator that charges the battery.[8][9][10]

In May 2010 Suzuki announced a demonstration program with 60 Swift Plug-in hybrids in Japan scheduled to start by late 2010.[8][11] Sales of the Suzuki Swift plug-in hybrid electric vehicle are scheduled to begin by 2013.[10]

The third generation Swift is being produced at Suzuki's plant in Hungary from where it will be supplied across Europe. The new car has its wheelbase extended by 50 millimeters over the previous second generation and has many visual updates. While the new car looks different from the old one, its design is an evolution of the radical second generation styling with a longer and more rounded appearance. The new generation is expected to feature a 1.2 liter VVT petrol engine developing 92 bhp.

The 2010 third generation Swift is expected to replace the GM-Daewoo produced Swift+ in the North American market as the new model meets the regulatory requirements there.[12]

During September 2010 Suzuki in the United Kingdom released the third generation Swift onto British roads. Post-September 2010 Swifts are fitted with a heavily revised version of the K12 engine found in the Suzuki Wagon R+. 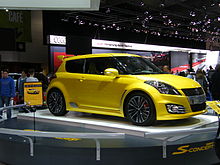 The Suzuki S-Concept[13] was unveiled at the 2011 Australian International Motor Show. The concept car is powered by a 1.6 litre 4-cylinder engine combined with a six-speed manual transmission.[14]At Paris, it was rumored that the next Swift Sport would get a 150-hp (112-kW / 152-PS), a 22 percent increase over the 2010 model. At 3,890mm (153.15 inches), the car is 177mm (6.97 inches) longer than the current MINI Cooper S. It is similarly wider and taller, but its 2,430mm (95.67 inches) wheelbase is 36mm (1.41 inches) shorter than the Cooper. Riding on 18-inch wheels, the car now features a large rear wing, new headlights and rear lighting clusters. It has also been brought closer to the ground. Inside, designers included bucket seats, a new steering wheel, different instrumentation and carbon fiber trim.