Mercury Theatre
This article is about the company founded in New York by Orson Welles and John Houseman. For other uses, see Mercury Theatre (disambiguation). 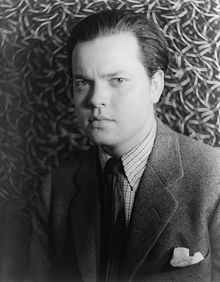 In 1936, Welles and producer John Houseman earned a reputation for their inventive adaptation of William Shakespeare's Macbeth, set in Haiti and using an all African American cast, which was then followed by Welles and Edwin Denby's adaption of Horse Eats Hat. In 1937 they founded the Mercury Theatre and produced a ground breaking adaption of Julius Caesar set in contemporary Fascist Italy, Marlowe's Doctor Faustus and in June that year the legendary production of Marc Blitzstein's The Cradle Will Rock. They moved on to productions of The Shoemaker's Holiday, Heartbreak House, Too Much Johnson and Danton's Death in 1938. In 1939 Five Kings was produced along with The Green Goddess. The last theatrical production of the company was Native Son in 1941.

Welles had already worked extensively in radio drama, playing the title character in The Shadow for a year and directing a seven-part adaptation of Victor Hugo's Les Misérables, both for the Mutual Broadcasting System. In 1938, he was offered a chance to direct his own weekly, hour-long radio series, initially promoted as First Person Singular. However, this title was never announced on the air. Radio Guide initially mentioned the series' debut as Mercury Theatre before later listing it as The Mercury Theatre on the Air.

Welles insisted his Mercury company — actors and crew — be involved in the radio series. This was an unprecedented and expensive request, especially for one so young as Welles. Most episodes dramatized works of classic and contemporary literature. It remains perhaps the most highly regarded radio drama anthology series ever broadcast, most likely due to the creativity of Orson Welles.

The Mercury Theatre on the Air was an hour-long dramatic radio program which began in the summer of 1938 on the CBS radio network. Paul Holler, writing in Critique, described the program's origin:

Radio, with its power to excite the imagination and actually involve the audience in the creative process, had huge potential as a medium for serious drama. It seemed inevitable that the day would come when this medium, which had made Orson Welles a household name across the country, would become a part of his serious theater ambitions. That day came in 1938.

It was in that year that CBS, remembering Welles' work on Les Misérables the year before, approached him and Houseman about a series of radio dramas for its summer schedule. The idea was conceived as a series of narratives under the title First Person Singular. But the series would be best remembered by the name it assumed with its second production, The Mercury Theatre on the Air.

As with Les Misérables the previous year, Welles was given complete creative control by CBS over the new series. The choices he made in developing the series were informed by what he had learned in previous years in other radio dramas. Chief among those choices was to create dramas specifically for the radio and not to simply adapt dramas in production at the Mercury Theatre for broadcast. In close collaboration with John Houseman and other writers, Welles wrote, directed and performed in the productions. The end result was a series of dramas based on literary, rather than dramatic, works. There were exceptions, most notably Our Town by Welles' early mentor Thornton Wilder. But it was clear to Welles and Houseman that the medium of radio suited the telling of a story far better than the dramatization of it. As a result, some of the most memorable Mercury Theatre on the Air productions were adaptations of great novels. Adventures of Huckleberry Finn, A Tale of Two Cities, The Magnificent Ambersons, Heart of Darkness and other major literary works were offered to radio audiences during the Mercury Theatre on the Air's run. [1]

Houseman wrote the early scripts for the series, turning the job over to Howard Koch at the beginning of October. Music for the program was conducted by Bernard Herrmann. Their first radio production was Bram Stoker's Dracula, with Welles playing both Count Dracula and Doctor Seward. Other adaptations included Treasure Island, The Thirty-Nine Steps, The Man Who Was Thursday and The Count of Monte Cristo.

Originally scheduled for nine weeks, the network extended the run into the autumn, moving the show from its Monday night slot, where it was the summer substitute for the Lux Radio Theater, to a Sunday night slot opposite Edgar Bergen's popular variety show.

The early dramas in the series were praised by critics, but ratings were low. A single broadcast changed the program's ratings: the October 30, 1938 adaptation of H. G. Wells' The War of the Worlds.

Possibly thousands of listeners thought Martians were in fact invading the earth, due to the faux-news quality of most of the broadcast. Significant publicity was generated, and The Mercury Theatre on the Air quickly became one of radio's top-rated shows.

The War of the Worlds notoriety had a welcome side effect of netting the show the sponsorship of Campbell's Soup, guaranteeing its survival for a period, and beginning on December 9, 1938, the show was retitled The Campbell Playhouse. The company moved to Hollywood for their second season, and continued briefly after Welles' final performance in March 1940. Welles revived the Mercury Theatre title for a short series in the summer of 1946.

Welles used the banner "Mercury Productions" on many of his films, and several of the actors from his Mercury Theatre Company appeared in them, notably in Citizen Kane, The Magnificent Ambersons and Macbeth.

Orson Welles' notoriety following The War of the Worlds broadcast earned him Hollywood's interest, and RKO studio head George J. Schaefer's unusual contract. Welles made a deal with Schaefer on July 21, 1939 to produce, direct, write, and act in two feature films. The studio had to approve the story and the budget if it exceeded $500,000. Welles was allowed to develop the story without interference, cast his own actors and crew members, and have the privilege of final cut unheard of at the time for a first-time director. He had spent the first five months of his RKO contract trying to get several projects going with no success. The Hollywood Reporter said, "They are laying bets over on the RKO lot that the Orson Welles deal will end up without Orson ever doing a picture there." First, Welles tried to adapt Heart of Darkness, but there was concern over the idea to depict it entirely with point of view shots. Welles considered adapting Cecil Day-Lewis' novel The Smiler With The Knife, but realized that to challenge himself with a new medium, he had to write an original story.

Screenwriter Herman J. Mankiewicz was recuperating from a car accident and in-between jobs. He had originally been hired by Welles to work on The Campbell Playhouse radio program and was available to work on the screenplay for Welles' film. The writer had only received two screenplay credits between 1935 and his work on Citizen Kane and needed the job. There is dispute amongst historians regarding whose idea was to use William Randolph Hearst as the basis for Charles Foster Kane. Welles claimed it was his idea while film critic Pauline Kael (in her essay "Raising Kane") and Welles' former business partner John Houseman claim that it was Mankiewicz's idea. For some time, Mankiewicz had wanted to write a screenplay about a public figure perhaps a gangster whose story would be told by the people that knew him.

Mankiewicz had already written an unperformed play entitled, The Tree Will Grow about John Dillinger. Welles liked the idea of multiple viewpoints but was not interested in playing Dillinger. Mankiewicz and Welles talked about picking someone else to use a model. They hit on the idea of using Hearst as their central character. Mankiewicz had frequented Hearst's parties until his alcoholism got him barred. The writer resented this and became obsessed with Hearst and Marion Davies. Hearst had great influence and the power to retaliate within Hollywood so Welles had Mankiewicz work on the script outside of the city. Because of the writer's drinking problem, Houseman went along to provide assistance and make sure that he stayed focused. Welles also sought inspiration from Howard Hughes and Samuel Insull (who built an opera house for his girlfriend). Although Mankiewicz and Houseman got on well with Welles, they incorporated some of his traits into Kane, such as his temper.

During production, Citizen Kane was referred to as "RKO 281". Filming took place between June 29, 1940 and October 23, 1940 in what is now Stage 19 on the Paramount Pictures lot in Hollywood. Welles prevented studio executives of RKO from visiting the set. He understood their desire to control projects and he knew they were expecting him to do an exciting film that would correspond to his The War of the Worlds radio broadcast. Welles' RKO contract had given him complete control over the production of the film when he signed on with the studio, something that he never again was allowed to exercise when making motion pictures. According to an RKO cost sheet from May 1942, the film cost $839,727 compared to an estimated budget of $723,800.