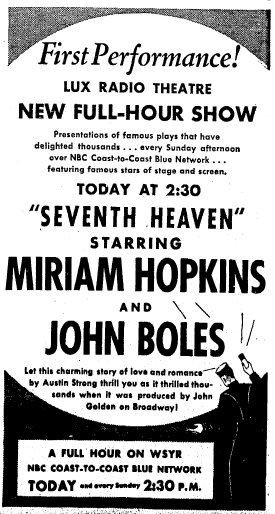 The program always began with an announcer proclaiming, "Ladies and gentlemen, Lux presents Hollywood!" was the host of the series each Monday evening from , , until , . On one occasion, however, he was replaced by Leslie Howard.

"Lux Radio Theater" strove to feature as many of the original stars of the original stage and film productions as possible, usually paying them $5,000 an appearance to do the show. It was when (who made Lux soap and detergent) moved the show from to in 1936 that it eased back from adapting stage shows and toward adaptations of films. The first "Lux" film adaptation was "The Legionnaire and the Lady", with and , based on the film "". That was followed by a "Lux" adaptation of "The Thin Man", featuring the movie's stars, and .

Though the show focused on film and its performers, perhaps inevitably several classic radio regulars appeared in "Lux Radio Theater" productions. Jim and Marian Jordan, better known as , appeared on the show twice and also built an episode of their own radio comedy series around one of those appearances. Their longtime costar, (wisecracking Dr. Gamble) made a few "Lux" appearances as well. Bandleader ---a longtime regular on 's radio hit---and his singing actress wife, , who had become radio comedy stars with their own show beginning in 1948, appeared in a "Lux" presentation. , (with and without his wife, ), and were among the other radio stars who were invited to do "Lux" presentations as well.

At least once "Lux Radio Theater" presented an adaptation of the film version of a radio series hit: "", featuring as the Brooklyn-born, California-transplanted, stumbling but bighearted aircraft worker he already made famous in the long-running radio series (and eventual television hit) of the same name.

But also at least once "Lux Radio Theater" offered a presentation without any known performers---its 1942 adaptation of "This is the Army" included a cast strictly drawn from actual American soldiers.

"Mercury Theatre on the Air" -- which eventually made Orson Welles a force to be reckoned with, especially with the commotion his broadcast of "The War of the Worlds" (30 October 1938) provoked -- was initially a summer replacement series for "Lux Radio Theater".

It was a clash over closed shop union rulings favoured by the old American Federation of Radio Artists that ended DeMille's term as "Lux Radio Theater"'s host. AFRA assessed members a dollar each to help back a campaign to enact closed-shop rulings in California. DeMille, an AFRA member but a stern opponent of closed shops, refused to pay because he believed it would nullify his opposition vote. When AFRA ruled those not paying faced suspension from the union, and thus a ban from appearing on the air, DeMille was finished---because he also refused to let anyone else pay the dollar for him. "Lux Radio Theater" auditioned, on the air, several hosts over the next year, until they settled on as the new permanent host, a post he held from late 1945 through mid-1955.

During its years on CBS in Hollywood, "Lux Radio Theater" was broadcast from the Lux Radio Playhouse located at 1615 North Vine Street in Hollywood, one block south of the famed intersection of Hollywood and Vine. The theater was later renamed The Huntington Hartford Theater, The Doolittle Theater, and is now the Ricardo Montalban Theater.

The "" began as a live 30-minute Monday evening CBS series , , switching to Thursday nights during August, 1951. In September 1953, the show relocated from New York to Hollywood. In August, 1954, it jumped to NBC as an hour-long show on Thursday nights, telecast until , . was the host in the 1954-55 season.