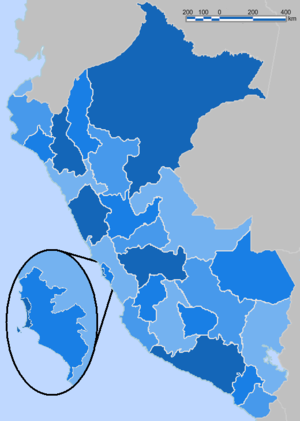 The regions (Spanish: regiones) of Peru are the first-level administrative subdivisions of Peru. Since its 1821 independence, Peru had been divided into departments (Spanish: departamentos) but faced the problem of an increasing centralization of political and economic power in its capital, Lima. After several unsuccessful decentralization attempts, the legal figure of region became official and regional governments were elected to manage the departments on November 20, 2002 until their planned fusion into real regions.

Under the new arrangement, the former 24 departments plus the Callao Province has become regional circumscriptions. The province of Lima has been excluded from this process and does not form part of any region. Unlike the earlier departments, regions have an elected government and have a wide array of responsibilities within their jurisdiction. Under the 2002 Organic Law of Regional Governments (Spanish: Ley Orgánica de Gobiernos Regionales), there is an ongoing process of transfer of functions from the central government to the regions. A 2005 referendum for the merger of several departments failed to get the necessary electoral support.

Peruvian regions and departments are subdivided in provinces and districts.

After declaring its independence in 1821, Peru was divided into departments (Spanish: departamentos), which grew in number from eleven in 1822 to twenty-four in 1980:

As political and economic power increasingly concentrated in Lima, the capital city, several administrations tried to decentralize the country with little success.[1] The 1979 Peruvian Constitution contained provisions for the decentralization of power through the creation of autonomous regions, but they were not implemented.[2] During the later years of the 1985–1990 presidency of Alan García, the government faced the prospect of losing the 1990 presidential elections due to a widespread economic crisis and faltering public support. As a way of creating an alternative source of power, the regime established twelve autonomous regions on January 20, 1989 in the hope of winning some elections at this level.[3] However, due to the haste of their creation, these regional governments were not provided with fiscal resources of their own so they depended on the goodwill of the central government for funding.[4]

The 1990 presidential elections were marked by the discredit of political parties as evidenced in the election of Alberto Fujimori, an independent candidate. Fujimori withheld financial transfers to regional governments and then, on December 29, 1992, replaced them with government-designated Transitory Councils of Regional Administration (Spanish: Consejos Transitorios de Administración Regional). Having dissolved Congress, in the 1992 Peruvian constitutional crisis, Fujimori called an election for a Constitutional Assembly which drafted the 1993 Constitution. This new text included provisions for the creation of regions with autonomous, elected governments but they were not carried out. A framework law on decentralization (Spanish: Ley Marco de Descentralización) issued on January 30, 1998, confirmed the permanence of transitory councils, now under the supervision of the Ministry of the Presidency.[5]

Fujimori was forced to resign in November 2000 under accusations of authoritarianism, corruption, and human rights violations.[6] After an interim government led by Valentín Paniagua, Alejandro Toledo was elected president for the 2001–2006 period on a platform that included creating regional governments.[7] The new administration laid out the legal framework for the new administrative subdivisions in the Decentralization Bases Law (Spanish: Ley de Bases de la Descentralización), issued on July 17, 2002, and the Organic Law of Regional Governments (Spanish: Ley Orgánica de Gobiernos Regionales) issued on November 19, 2002. New regional governments were elected on November 20, 2002, one in each of the former departments and the former Constitutional Province (Spanish: Provincia Constitucional) of Callao. The province of Lima, containing the capital, was excluded from the process thus it is not part of any region.

In the 2002 elections, most regional governments went to parties in opposition, with twelve going to the APRA and only one to Possible Peru, the party of president Alejandro Toledo.[8] The combination of a strong opposition and a weak government led to concerns about an impending political crisis, however, this did not turn out to be the case as the new regional governments were absorbed by local problems and showed little initiative in national politics.[9] As the territorial circumscriptions that regional governments inherited from the former departments are considered too small, the Decentralization Bases Law provides for mergers between departments after a majority of the populations involved express their approval up to baceme a formal region.[10] The first referendum of this kind was carried out on October 30, 2005 with the following proposals being put to ballot:

These proposals were rejected by the electorate of all departments involved with the exception of Arequipa thus, no merger was carried out.[11]

New elections for regional governments were held on November 19, 2006; most regions went to local political movements rather than to national parties. The APRA, which had won the presidential elections held on June 4, 2006, only managed to win in two regions, all other national parties achieved even less.[12]

According to the Organic Law of Regional Governments, the responsibilities of regional governments include planning regional development, executing public investment projects, promoting economic activities, and managing public property.[13] Regional governments are composed of a president and a council, elected for a four-year term; additionally, there is a coordination council integrated by provincial mayors and representatives of the civil society.[14] The Regional President is the head of government; his functions include proposing and enforcing the budget, appointing government officials, issuing decrees and resolutions, executing regional plans and programs, and administering regional properties and rents.[15] The Regional Council debates and votes upon bills proposed by the regional president, it also oversees all regional officials and can remove the president, its vice president and any council member from office.[16] The Regional Coordination Council has a consultancy role on planning and budget issues, it has no executive or legislative powers.[17]

The Organic Law of Regional Governments stipulates the gradual transfer of functions from the central government to the regions, provided they are certified as capable of undertaking these tasks.[18] To oversee this process, the Decentralization Bases Law created a National Council of Decentralization (Spanish: Consejo Nacional de Descentralización).[19] However, this institution was criticized for being bureaucratic and ineffective by the government of Alan García, the current president of Peru. Thus, on January 24, 2007, the council was abolished and replaced by the Decentralization Secretariat (Spanish: Secretaría de Descentralización), a dependency of the Prime Minister office.[20] Two months later, the regional presidents gathered in the city of Huánuco established a National Assembly of Regional Governments (Spanish: Asamblea Nacional de Gobiernos Regionales) as an alternative coordinating institution, independent from the Central Government.[21]

Area and population information on the following list has been retrieved from official data by the Peruvian National Institute of Statistics and Informatics (Spanish: Instituto Nacional de Estadística e Informática, INEI).[22] Areas are rounded to the nearest whole unit. Demographic data is based on the 2005 Census carried out from July 18 through August 20, 2005. Population density is given to one decimal place in persons per square kilometer. UBIGEO numbers are codes used by INEI to identify national administrative subdivisions.