Gabrielle Émilie Le Tonnelier de Breteuil, marquise du Châtelet (17 December 1706, Paris – 10 September 1749, Lunéville) was a French mathematician, physicist, and author during the Age of Enlightenment. Her crowning achievement is considered to be her translation and commentary on Isaac Newton's work Principia Mathematica. The translation, published ten years after her death in 1759, is still considered the standard French translation.

Voltaire, one of her lovers, declared in a letter to his friend King Frederick II of Prussia that du Châtelet was "a great man whose only fault was being a woman".[1][2] 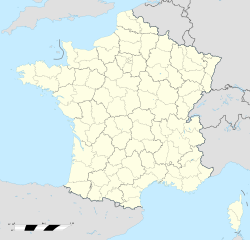 Semur
Significant places in the life of Emilie du Châtelet

Du Châtelet was born on 17 December 1706 in Paris, the only daughter of six children. Three brothers lived to adulthood: René-Alexandre (b. 1698), Charles-Auguste (b. 1701), and Elisabeth-Théodore (b. 1710). Her eldest brother, René-Alexandre, died in 1720, and the next brother, Charles-Auguste, died in 1731. However, her younger brother, Elisabeth-Théodore, lived to a successful old age, becoming an abbé and eventually a bishop. Two other brothers died very young.[3] Du Châtelet also had an illegitimate half-sister, Michelle, who was born of her father and Anne Bellinzani, an intelligent woman who was interested in astronomy and married to an important Parisian official.[4]

Her father was Louis Nicolas le Tonnelier de Breteuil, a member of the lesser nobility. At the time of du Châtelet's birth, her father held the position of the Principal Secretary and Introducer of Ambassadors to King Louis XIV. He held a weekly salon on Thursdays, to which well-respected writers and scientists were invited.

Du Châtelet's education has been the subject of much speculation, but nothing is known with certainty.[5]

Among their acquaintances was Fontenelle, the perpetual secretary of the French Académie des Sciences. Émilie's father Louis-Nicolas, recognizing her early brilliance, arranged for Fontenelle to visit and talk about astronomy with her when she was 10 years old.[1] Émilie's mother, Gabrielle-Anne de Froulay, was brought up in a convent, at the time the predominant educational institution available to French girls and women.[1] While some sources believe her mother did not approve of her intelligent daughter, or of her husband's encouragement of Émilie's intellectual curiosity,[1] there are also other indications that her mother not only approved of du Châtelet's early education, but actually encouraged her to vigorously question stated fact.[6]

In either case, such encouragement would have been seen as unusual for parents of their time and status. When she was small, her father arranged training for her in physical activities such as fencing and riding, and as she grew older, he brought tutors to the house for her.[1] As a result, by the age of twelve she was fluent in Latin, Italian, Greek and German; she was later to publish translations into French of Greek and Latin plays and philosophy. She received education in mathematics, literature, and science. Her mother Gabrielle-Anne was horrified at her progress and fought Louis-Nicolas at every step, once attempting to have Émilie sent to a convent.[6]

Émilie also liked to dance, was a passable performer on the harpsichord, sang opera, and was an amateur actress. As a teenager, short of money for books, she used her mathematical skills to devise highly successful strategies for gambling.[1]

On 12 June 1725, she married the Marquis Florent-Claude du Chastellet-Lomont.[7][note 1] Her marriage conferred the title of Marquise du Chastellet.[note 2] Like many marriages among the nobility, theirs was arranged. As a wedding gift, the husband was made governor of Semur-en-Auxois in Burgundy by his father; the recently married couple moved there at the end of September 1725. Du Châtelet was eighteen at the time, her husband thirty.

In 1733, at the age of 26, du Châtelet resumed her mathematical studies. Initially, she was tutored in algebra and calculus by Moreau de Maupertuis, a member of the Academy of Sciences. Although mathematics was not his forte, Maupertuis had received a solid education from Johann Bernoulli, who also taught Leonhard Euler. By 1735, however, du Châtelet had turned for her mathematical training to Alexis Clairaut, a mathematical prodigy known best for Clairaut's equation and Clairaut's theorem. 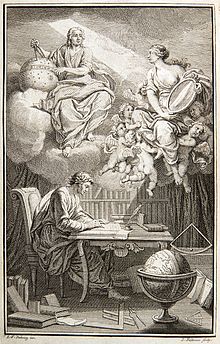 In the frontispiece to her translation of Newton, du Châtelet is depicted as the muse of Voltaire, reflecting Newton's heavenly insights down to Voltaire.

Du Châtelet and Voltaire may have met in her childhood at one of her father's salons; Voltaire himself dates their meeting to 1729, when he returned from his exile in London. However, their friendship began in earnest in May 1733, upon her re-entering society after the birth of her third child.[5]

Du Châtelet invited Voltaire to live in her country house at Cirey-sur-Blaise in Haute-Marne, northeastern France, and he became her long-time companion (under the eyes of her tolerant husband). There she studied physics and mathematics and published scientific articles and translations. To judge from Voltaire's letters to friends and their commentaries on each other's work, they lived together with great mutual liking and respect.

The chateau of Cirey 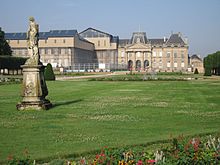 The chateau of Lunéville

In May 1748, Du Châtelet began an affair with the poet Jean François de Saint-Lambert and became pregnant. In a letter to a friend, she confided her fears that she would not survive her pregnancy. On the night of 3 September 1749, she gave birth to a daughter, Stanislas-Adélaïde, but died a week later from a pulmonary embolism at the age of 42. Her daughter died roughly eighteen months later.[11]

In 1737, Châtelet published a paper entitled Dissertation sur la nature et la propagation du feu, based upon her research into the science of fire, that predicted what is today known as infrared radiation and the nature of light.

Her book Institutions de Physique (“Lessons in Physics”) appeared in 1740; it was presented as a review of new ideas in science and philosophy to be studied by her thirteen-year-old son, but it incorporated and sought to reconcile complex ideas from the leading thinkers of the time.

In it, she combined the theories of Gottfried Leibniz and the practical observations of Willem 's Gravesande to show that the energy of a moving object is proportional not to its velocity, as had previously been believed by Newton, Voltaire and others, but to the square of its velocity. (In classical physics, the correct formula is Ek = 1⁄2mv², where Ek is the kinetic energy of an object, m its mass and v its velocity.)

Translation and commentary on Newton's Principia

In 1749, the year of her death, she completed the work regarded as her outstanding achievement: her translation into French, with her commentary, of Newton’s Principia Mathematica, including her derivation of the notion of conservation of energy from its principles of mechanics. Published ten years after her death, today du Châtelet's translation of Principia Mathematica is still the standard translation of the work into French.

Much later in life, she once lost 84,000 francs (the equivalent of over US$1,000,000 in 2009)—some of it borrowed—in one evening at the table at the court of Fontainebleau, to card cheats.[1][12] To quickly raise the money to pay back her huge debts, she devised an ingenious financing arrangement similar to modern derivatives, whereby she paid tax collectors a fairly low sum for the right to their future earnings (they were allowed to keep a portion of the taxes they collected for the King), and promised to pay the court gamblers part of these future earnings.[1]

Du Châtelet wrote a critical analysis of the Bible, specifically the book of Genesis and those of the New Testament.

Du Châtelet also wrote a monograph, Discours sur le bonheur, on the nature of happiness, both in general and specialized to women.

Translation of the Fable of the Bees, and other works

Du Châtelet translated The Fable of the Bees in a free adaptation. She also wrote works on optics, rational linguistics, and the nature of free will.

In her first independent work, the preface to her translation of the Fable of the Bees, du Châtelet argues strongly for women's education, particularly a strong secondary education as was available for young men in the French collèges. By denying women a good education, she argues, society prevents women from becoming eminent in the arts and sciences.[13]

Although the classical mechanics of du Châtelet are not approached with the same methodology as Einstein's concept of mass and velocity,[14] in his famous equation for the energy equivalent of matter E = mc² (where c represents the velocity of light), modern biographers and historians persist in seeing a neat accord with the principle E ∝ mv² first recognised by du Châtelet from over 150 years before.[15][16] It should be emphasized, however, that from a physical point of view, du Châtelet's principle is a correct assessment of the kinetic energy in classical mechanics, and is the first term in an expansion of Einstein's Mass–energy equivalence.

A main-belt minor planet and a crater on Venus have been named in her honor, and she is the subject of two plays: Legacy of Light by Karen Zacarías and Emilie: La Marquise Du Châtelet Defends Her Life Tonight by Lauren Gunderson. The opera Émilie of Kaija Saariaho is about the last moments of her life.[17]

Du Châtelet is often represented in portraits with mathematical iconography, such as holding a pair of dividers or a page of geometrical calculations. In the early nineteenth century, a French pamphlet of celebrated women (Femmes célèbres) introduced a possibly apocryphal story of du Châtelet's childhood.[18] According to this story, a servant fashioned a doll for her by dressing up wooden dividers as a doll; however, du Châtelet undressed the dividers and intuited their purpose, making a circle with them.