Dunure (Scottish Gaelic: Dùn Iùbhair, meaning Yew Hill) is a small village in the South Ayrshire area of Scotland. Located on the coast of the Firth of Clyde, Dunure is near to Maybole. 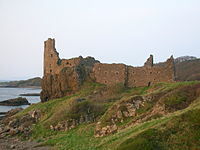 The first buildings in the lower Dunure village were erected in the early nineteenth century, not long after improvements to the local harbour in 1811. Kennedy Hall dates from 1881 and Dunure House from around 1800. Limekilns are a common feature of small harbours and Dunure has a fine specimen at the village play park.[1]

Fisherton Church was erected in 1938 as a chapel of ease for Dunure and district. It was rebuilt and extended in 1912. Dunduff Castle stands above Fisherton; originally a 15th century structure it was altered and extended in the 1980s for use as a private house. The remains of a prehistoric earthwork, the Dane's Hill, are located in a nearby field. The ruins of the pre-reformation Kirkbride church and cemetery are nearby, abandoned since the parish was combined with that of Maybole.[2] 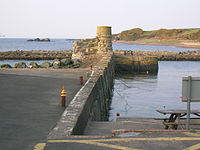 The harbour is a roughly square basin with a breakwater quay, topped off by a characteristic cylindrical stone harbour light. The Earl of Cassillis improved the harbour at a cost of £50,000 in 1811, making the location more attractive for fishing. The depth of the water in the harbour is 12 feet at ordinary spring tides, but could be artificially increased to nearly 30 feet.[3] William Aiton records in 1808 that the sole costs of the improvements to Dunure harbour were borne by Thomas Kennedy of Dunure Esq.[4]

There was previously a Dunure railway station in the village on the Maidens and Dunure Railway, however this station closed in the 1930s. 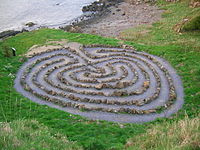 John Keppie was a colleague of Charles Rennie Mackintosh who rented the house of Mainslea and a small cottage in its back garden, opposite Dunure Castle for “The Roaring Camp”; a holiday home for girl friends of theirs from the Glasgow School of Art. It was from this base that Mackintosh set out on a sketching expedition to the abbey of Crossraguel, Baltersan and Maybole in 1895.[5]

The famous Electric Brae and the substantial ruins of the infamous Dunure Castle are located near the village. Dunduff Castle above Fisherton primary school has been rebuilt and is now a private home; the old parish cemetery and pre-reformation church ruins lie near Dunduff Farm. The mounted skeleton of the famous Clydesdale horse 'Baron of Buchlyvie' is a popular attraction for the Kelvingrone Museum and Art Galleries in Glasgow. The Baron finished his days at Dunure Mains Farm and was originally buried here.[6]

A labyrinth has been constructed in a hollow on the headland overlooking the castle as part of the Kennedy Park improvements.