This article discusses a village in Scotland, for the town in Northern Ireland, see Dundonald; For the Scottish peerage, see Earl of Dundonald. 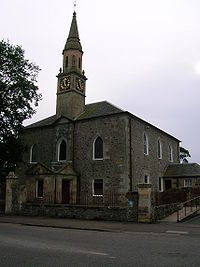 The village is mostly known for Dundonald Castle, which was built in the 14th century by king Robert II, on the ruins of a castle built earlier (in 1260 by his grandfather, Alexander Comyn. It served the Scottish kings for 150 years.

The ruins of Old Auchans Castle lies nearby, the previous residence of Susanna Montgomery, Lady Eglinton.

Since 1945, it serves mostly as a dormitory town for the larger towns in the area.

Tens of thousands of years ago Dundonald did have a beach at one point.

The present church (NS 366 343) was built in 1803, however the first recorded church was present in 1229 when it was gifted to the convent at Damilling and later to Paisley Abbey, with whom it stayed until the Reformation.[1]

Views in and around Dundonald

A new Auchans House (NS 36035 34900) was built circa 1819, designed by William Wallace.[2] The house was built for the Earl of Eglinton's commissioner Monteaulieu Burgess of Coilsfield, followed in 1885 by the Hon. Greville Richard Vernon, son of the 1st Lord Lyveden. Major Coats of the Paisley thread manufacturers tenanted the house at one time, as did the Beattie banking family.[3] In 1947 the Earl of Eglinton sold the house to the Earl of Dundonald.[4] The house was then sold by the Earl of Dundonald in 1960 to a builder and finally demolished in 1970 and the site has since been developed as a housing estate on the edge of the town.[5][6] 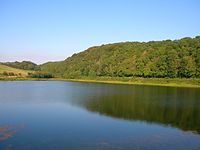 Dundonald Woods (NS363343) are one of the most extensive areas of elm-dominated woodlands in Ayrshire. Ash, oak and sycamore are also abundant; much of the policies are composed of derelict-coppiced-type growth from trees felled in the Second World War. Some conifer plantations are present. Wetland habitats are also present, including the Collennan Reservoir, springs and a eutrophic loch, contributing to the high biodiversity of the site. Dog's Mercury, Wood Melick, Broad-leaved Helleborine, and Giant Bellflower are amongst the significant plants present.[7] 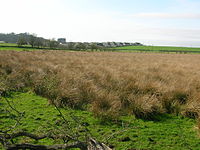 The site of Galrigs Loch with Dundonald in the background.

The small loch of Galrigs was located near Laurieston Farm and the ruin of Lochside Farm; it is now evident as a marshy area dominated by rushes. Galrigs was the old name for the lands of Newfield.

The Slough of Despond 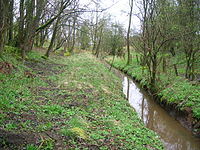 The Slough Burn in the Slough of Despond.

On the boundary of Dundonald and Symington parishes lies an area known as the 'Slough of Despond'. The original Slough of Despond is a deep bog in John Bunyan's allegory The Pilgrims Progress into which the character Christian sinks under the weight of his sins and his sense of guilt for them.

The burn in this area, rising near the old Broadhirst Farm, has long been known as the Slough, the Scots equivalent spelling is Sleugh, meaning a marsh or quagmire. It is not known how the name 'Slough of Despond' was added to the area, however it is recorded since the mid 19th century and may be linked to the nearby limekilns that were generally notorious for the acrid 'hell-like' smoke that issued from them.

The Slough Burn still rises from the marshy area below the Broadhirst Woods, however the limestone quarry that served the limekilns is now abandoned, surviving as an area rich in wildlife, containing old woodland indicator plants such as Wood Anemone (Anemone nemorosa), Bluebell (Hyacinthoides non-scripta), Wood Sorrel (Oxalis acetosella), Dog's Mercury (Mercurialis perennis), Herb Robert (Geranium robertianum)and other species. The Slough Burn runs down past Dankeith House, Templeton and Fortacres, Todrigs and through Caprington, to join the River Irvine near Gatehead.