Dytiscidae – based on the Greek dytikos (δυτικός), "able to dive" – are the predaceous diving beetles, a family of water beetles. They are about 25 mm (one inch) long on average, though there is much variation between species. Dytiscus latissimus, the largest[citation needed], can grow up to 45 mm long. Most are dark brown, blackish or dark olive in color with golden highlights in some subfamilies. They have short, but sharp mandibles. Immediately upon biting they deliver digestive enzymes. The larvae are commonly known as water tigers. The family has not been comprehensively cataloged since 1920, but is estimated to include about 4,000 species in over 160 genera.

When still in larval form, the beetles vary in size from about 1 to 5 cm (half an inch to two inches). The larvae's bodies are shaped like crescents, with the tail long and covered with thin hairs. Six legs protrude from along the belly, which also sports the same thin hairs. The head is flat and square, with a pair of long, large pincers. When hunting, they cling to grasses or pieces of wood along the bottom, and hold perfectly still until prey passes by, then they lunge, trapping their soon-to-be-food between their front legs and biting down with its pincers. Their usual prey includes tadpoles and glassworms, among dozens of other smaller water-dwelling creatures.

As soon as the beetles come to the stage in life in which they mature to adulthood, the larva crawl from the water on the sturdy legs, and bury themselves in the mud for pupation. After about a week, or longer in some species, they emerge from the mud as adults.

Adult Dytiscidae, particular of the genus Cybister, are edible. In Mexico, C. explanatus are eaten roasted and salted to accompany tacos. In Japan, C. japonicus is used as food. In the Guangdong Province of China, the latter species as well as C. bengalensis, C. guerini, C. limbatus, C. sugillatus, C. tripunctatus and probably also the well-known Great Diving Beetle Dytiscus marginalis are bred for human consumption, though as they are cumbersome to raise due to the carnivorous habit and have a fairly bland (though apparently not offensive) taste and little meat, this is decreasing. Dytiscidae are reportedly also eaten in Taiwan, Thailand, and New Guinea.[1]

Large but slow on land and not particularly fierce as adults, they are also eaten with relish by many mid-sized birds, mammals and other larger predators. The larvae are usually safer, due to their camouflage and ability to escape by water jet; they can be quite hard to catch and may become apex predators in small ponds.

The following taxonomic sequence gives the subfamilies, their associated tribes, and some notable genera. Note that the Colymbetinae are heavily split up in many treatments, and their monophyly if widely delimited is in doubt. 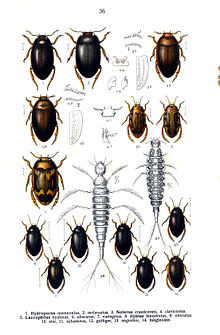 Agabus congener of the Agabini, sometimes considered a subfamily 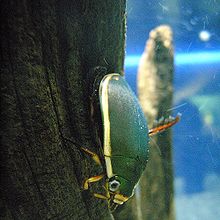