The College of St Hild and St Bede, commonly known as Hild Bede, is a college of Durham University in England. It is the University's second largest collegiate body, with over 1000 students. The co-educational college was formed in 1975 following the merger of two much older single-sex institutions, the College of the Venerable Bede for men and St Hild's College for women. In 1979 the College was sold to the University of Durham and part of the College buildings (mainly the Bede site) were occupied by the University's Department of Education, whilst the College centred itself on the old Hild's site. Hild Bede is neither a Bailey nor a Hill college, and is situated on the banks of the River Wear between Durham's 'peninsula' and Gilesgate. In 2010, it was voted best Durham college in the Times Higher Education Awards[citation needed]. 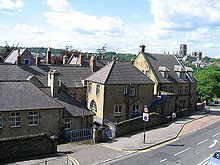 The College of the Venerable Bede, for men, was founded in 1838 with a small number trainee schoolmasters. The college was expanded greatly over the next few decades the with the assistance of trade unionist and future local MP William Crawford[1], who would later become the college's treasurer. Its sister institution, St Hild's College, was opened for the education of women on an adjacent site in 1858. Both colleges initially specialised in teacher training but in 1892 for Bede and 1896 for Hild they became associated with the federal University of Durham, offering B.A. and B.Sc. degrees alongside teaching in education. Graduates of St Hild's were the first female graduates from Durham in 1898. The Chapel of the Venerable Bede, completed in 1939 to celebrate Bede College’s centenary, was designed by Paul Edward Paget[2] and funded by donations from Bede College Lodge of Freemasons.

The two colleges retained links throughout the next century with shared teaching and facilities. In the 1960's they constructed the shared Caedmon Complex. It was then that it was decided that the colleges should be formally merged and in 1975 they became the unitary College of St. Hild and St. Bede, a recognised college of the university. In 1979 Hild Bede joined the College Council, becoming a full constituent college of the university and ceasing to award its own PGCE qualifications. 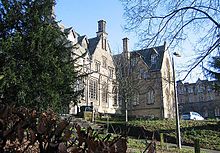 The college consists of several distinct buildings, including the main Hild building, which is the administrative hub of the college containing the main college library, offices, computer room, common rooms and a large number of student rooms; other larger accommodation blocks, such as Thorp, Christopher, Bede; and several smaller houses such as Hild Gym, Bede Gym, Charles Stranks, Gables, Manor House, Manor Lodge, Belvedere and Grove House. At the centre of college is the Caedmon Complex, which contains a dining hall, two bars (The Vernon Arms, named after the original Hild Bede Principal, Dr Vernon Armitage & The Undercroft Bar which is open for selected events only), music rooms and the only student-run cinema in Durham, Bede Film Soc [1]. The college is one of two colleges in Durham to have two chapels — The Chapel of St. Hild (now a function room named the Joachim Room) and The Chapel of the Venerable Bede (still in use). The college also maintains a boat house used by the boat club on the river near the Caedmon Complex.

Unlike most colleges of the university, the student body is not divided into Junior and Middle Common Rooms, instead both the undergraduate and postgraduate communities are represented by a single Student Representative Council (SRC). The SRC does however contain a special postgraduate committee and maintains the physical Junior and Middle Common Rooms, both in the Hild Building. The SRC is run by an elected exec that is headed by a sabbatical president. The college also has a Senior Common Room (SCR) consisting of the college tutors, past and current members of college staff and invited members of the wider community.[3]

The gowns worn by members of the college, retained from before the college became a constituent college of the University, differs from other Durham gowns in being made of brocaded fabric and being shorter. These are worn at matriculation and graduation, but not at formal hall. Formals are instead black tie events and happen around ten times a year. Postgraduate Formals happen bi-annually and include entrance and exit of the Venerable Bede's stone.

Like most Durham colleges, Hild Bede celebrates an annual college day, usually in early May. This day usually includes a Champagne Breakfast on the College Lawns; an optional service in the Cathedral; a buffet lunch in the Dining Hall and a marquee; picnics and barbecues on the lawns; and entertainment throughout the day including bands, fairground-style events, Disco, Ceilidh and College Olympics.[4] The college also hosts two annual balls, the Christmas Ball at the end of Michaelmas Term and the Summer Ball after exams have finished. The Summer Ball has an annual budget of £40,000 and has recently attracted acts such as Tinie Tempah, Wheatus and British Sea Power.

In late April the college is host to the Sounding Retreat ceremony in conjunction with the Durham Light Infantry Association. Initially instituted to remember students and staff of the Bede College Company who lost their lives at the Second Battle of Ypres, it now commemorates all former members of College who have died in conflicts around the world.[4] 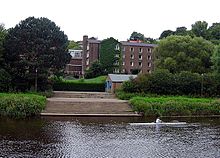 The college is sometimes regarded as having a slightly disproportionate public school intake and an inclination towards competitive sport. Hild Bede's sporting reputation is strong, putting forward several teams in a variety of sports.

Historically for the first time, as of the 2006–07 season Hild Bede will have three men's football teams in the highest university league, the premiership, which no other college can lay claim to.[5] The men's hockey team currently reside in North East League Division 1, a feat unique among the Durham Colleges; rivals in this league include Durham University 3rd and 4th teams and Newcastle University's 2nd team. The college mixed tennis team is the only college tennis club to play all year round, competing in the North-East winter league and the college league in the summer. The college's affiliated rugby team, Bede RFC, were the university's Floodlit Tournament Champions for 2005–06, defending this title successfully to remain champions in 2006-07 whilst simultaneously capturing the College League title in the same year (2006–07), remaining unbeaten in both competitions In many years of touring the team is yet to be defeated, and include victories over the national teams of Mexico, Estonia and Australia amongst their recent successes.[citation needed] The rugby team also recently wrote, directed and starred in a satirical production entitled Gladiat-Rah, which was performed at the Edinburgh Fringe Festival and won five Durham University Drama Awards. Many ex players are seen playing for A Few Good Men Cricket Club. The college has extensive sporting facilities, which aids the high level of sporting attainment.

Hild Bede's Chapel holds services twice a week during term time on a Wednesday evening and Sunday morning to which members of the public are invited to attend. The chapel choir is one of the finest in the region.

Hild Bede Theatre is the biggest college drama society in Durham and they put on at least 3 productions annually in Caedmon hall, including a musical at the beginning of the third term. In 2009-10 they won 2 Durham Oscars, "best college play" for "Who's afraid of Virginia woolf" and Best college musical for 42nd Street. They have won the latter more times than any other Durham theatre group, having won 6 times including 5 wins in the past 6 years.

Hild Bede also hosts the longest running alternative music event within the university, Full Collapse. The event is run bi-weekly in Caedmon's Undecroft and has been running for 10 years. The DJ's of Full Collapse have arranged with the organiser's of Revolver, Durham Student Union's weekly dance night, to provide alternative music in what has become known as "Partial Collapse"[6]

Additionally, Hild Bede houses the only student cinema in Durham, Bede Film Society. The society shows recent films on a 35mm projector with Dolby Digital surround sound[7] on most weekends of term, with the occasional midweek showing. The society was started over 30 years ago, before the merging of the two colleges, showing films on a 16mm projector.