Prime Computer, Inc. was a Natick, Massachusetts-based producer of minicomputers from 1972 until 1992. The alternative spellings "PR1ME" and "PR1ME Computer" were used as brand names or logos by the company.

The company was started by 7 founders, some of whom worked on the Multics project at MIT. 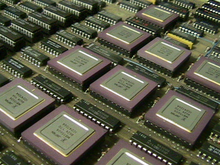 Part of the CPU board of a Prime minicomputer.

The company started with the motto "Software First". 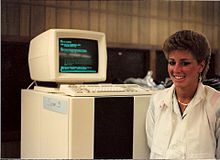 The original products were clones of the Honeywell 316 and 516 minicomputers.

The first Prime system, similar to the DDP 516 but a 32-bit machine with paging. It ran an operating system called DOS, also referred to as PRIMOS 2 (not to be confused with MS DOS).

The Prime 100 was a stripped down version of the Prime 200 (no memory parity or floating point).

The Prime 300 had a main store of 32KB to 512 KB and from 6MB of Pertec disc storage. It ran DOSVM operating system, also referred to as PRIMOS 3, but still used earlier DOS for booting. One of the first minicomputers with microcode-supported virtual memory capability. The virtual memory was simpler than used in later systems. Addresses were 16 bits, with each of up to 32 time-sharing (time slice) users, receiving a virtual 64K address space. It had S-mode and R-mode instructions.

An example of the Prime 300 was installed in the mathematics department of the University of Aston in Birmingham, UK and at the Medical University of Hannover, Germany.

The Prime 400 ran at 0.5 MIPS, had a main store of up to 8mb and 160MB of disc storage. The name PRIMOS was now used for the operating system and the P400 ran PRIMOS 4. It ran a V-mode instruction set, along with the S-mode and R-mode instructions. It had a segmented virtual memory architecture, somewhat similar to Multics.

The Prime 750 was a major upgrade. It ran at 1.0 MIPS, had 2-8MB of memory and 1200MB of disc storage and a 9 track tape unit. This was very competitive with a similarly priced DEC VAX-11/780 and was one of the first 32-bit superminicomputers. Prime 750 systems were installed at Rutherford Appleton Laboratory (RAL), University of Paisley, Leeds University, University of Manchester Institute of Science and Technology (UMIST) and the CADCentre in Cambridge.

PRIMENET and the local area network software RINGNET were announced.

By 1987 Prime Computer had introduced an alternative line of Intel 80386-based computers, the EXL-316 series, running the Unix operating system.[2]

The company was successful in the 1970s and 1980s, peaking in 1988 at number 334 of the Fortune 500. In 1985 the company was the 6th largest in the minicomputer sector, with estimated revenues of US $564 million [1] Much of this was based on the US Banking industry where the Pr1me Info database was widely accepted.

As of later 1989, Surrey University had the largest Prime Site in Europe, having multiple copies of virtually every 50 series machine (mostly running Primos 20.x, but some still running 19.x).

Prime was heavily involved with Ford’s internal computer-aided design (CAD) product, Product Design Graphics System (PDGS). It used a vectorscope from Lundy for a display. At one time in 1980s it was the world largest integrated CAD system, spanning the US, Japan (Mazda was Ford's subsidiary/partner), and Germany. The creators of PDGS, located in building #3 of Fords Dearborn design headquarters, began working on the concept of parametrically driven geometry, which led to a PRIMEDesign system.

The company also had marketing rights to the MEDUSA CAD system, produced in England by a company named Cambridge Interactive Systems, and experience in the domain, the company explored transitioning to a CAD company. It embarked on a project to build a CAD-CAM system of its own called PRIMEDesign headed by Vladimir Geisberg. This product was to compete with the industry leader at that time, CADDS4 from Computervision. RISC processors from MIPS Technologies and graphics processors from Silicon Graphics created the platform for PRIMEDesign as well as being the genesis of modern day SGI. During this period, in 1985, Sam Geisberg left Computervision to found Parametric Technology Corporation and produce a supposedly parameter driven CAD system called ProEngineer. Computervision acquired Cambridge Interactive Systems in 1983, and Prime forked their own version of MEDUSA.[citation needed]

Prime subsequently purchased Computervision and Vladimir Geisberg, then VP for CAD, tried to merge back together the Prime and Computervision versions of the Medusa CAD system, and to launch the Prime Design system. As time passed it became clear that the Prime Design system, while leading edge in theory, was totally unsuitable for real engineering design work. Prime Design was canned and Vladimir Geisberg was sacked in 1990 having failed to launch a viable CAD product and having destroyed the development organisation for the ongoing Medusa CAD product.

By the late eighties, the company was having problems retaining customers who were moving to lower-cost systems. In addition, Prime was failing to keep up with the increasing customers' need for raw computing power. By the end, not a single Prime computer was subject to COCOM export controls, as they were insufficiently powerful for the US Government to fear their falling into the hands of hostile powers.

The computer design and manufacturing portions of the company were shut down and the company was renamed Computervision. In 1998 it was bought by aforementioned Parametric Technology Corporation, that exists to this day. The remainder of the company became a support organisation for existing customers.

The company operating system, PRIMOS was originally written mostly in the Fortran IV programming language with some assembler. Subsequently the PL/P and Modula-2 languages were used in the Kernel. A number of new PRIMOS utilities were written in SP/L which was similar to PL/P.

It was one of the pioneer systems, and fought hard to win a place in the UK DTI Office Automation Pilot sites, but failed to achieve it.

Prime also claimed that OAS provided automatic translation between languages, but the feature was mostly non-existent, consisting only of one-word-at-a-time lookup in small dictionaries for Spanish and Norwegian.

Recognising the drawbacks of the downloadable WP workstation, Prime formed an agreement with Convergent Technologies for their AWS which Prime named the "Prime Producer 100" (launched in mid 1983) and later for Convergent's modular NGEN, clip together system, the "Prime Producer 200" (launched in 1984), each of which had far superior WP to the initial Prime offering, and were document based.

In the UK Prime had a very active OAS User Group whose suggestions were acted upon in new product development. UK Pioneers of the system included the London Docklands Development Corporation and Oxford Polytechnic, now Oxford Brookes University.

Very similar in concept and execution to the Pick environment developed by Richard Pick, Prime Information allowed rapid, 4GL or 4GL-like development of applications around relational or quasi relational database structures. After a series of evolutions and acquisitions this product is now part of the Rocket U2 software suite.

In (approx) 1984 Prime developed a system to conflict with OAS and confuse the market. Prime Information Connection added word processing to Prime Information, giving the company two office oriented suites to offer in a marketplace dominated by Wang Laboratories

Prime originally entered the CAD industry through Ford. At the time Ford was using Control Data Corporation (CDC) stand-alone computers. Data was shared via reel tape and stored in “Data Collector” rooms at each facility. Ford began looking for a small computer that had all the advantages of the CDC computers, but could also connect to a network.

Prime’s 2250 (“Rabbit”) offered the combination Ford was looking for in a package smaller than the original CDCs. In addition, the PRIMOS operating system would run unaltered across all Prime platforms; from the 2250 up to the (what would be considered today as a server) 750. As a result, the Data Collector (rooms) would contain several 750 class machines, each with rows of CDC 300 or 600MB drives. Primenet (token ring) network connected all CAD stations in a building with its Data Collector.

Ford pushed PDGS out to its suppliers and engineering contractors throughout the northern Midwest.

Prime gained expertise over the years with its collaboration with Ford and continued to expand into the CAD market with its Medusa product. With the acquisition of ComputerVision, Prime appeared to be a formidable force in the CAD/CAM industry.

Developed on relay.prime.com, which was the hub that relayed global electronic mail for Prime Computer. The software used on this computer system, PDN Mail, developed by Robert Ullmann, was designed to use the encoding header field that was later explained in a Request for Comments.[citation needed] PDN Mail was years ahead of its time and was also used by Microsoft Corporation until MIME was introduced.

Before MIME existed, PDN Mail was able to perform the same functions and was used to send software updates as well as all sorts of attachments between systems. In August 1993, Robert Ullmann, David Robinson and Al Costanzo, wrote RFC 1505. This RFC, documented the Encoding Header Field for Internet Messages that PDN mail used and was published by the RFC editor, Jon Postel that same year.

A series of memorable advertisements from 1980 featured actors Tom Baker and Lalla Ward as their characters from the TV series Doctor Who. All four of these adverts have since been included on the DVD release of the 1979 serial Destiny of the Daleks in which both actors appear.