In early seasons, Coach Fox continues to come to grips with the emerging womanhood of his "little girl," Kelly, now a campus coed played by Clare Carey, who enrolled at Minnesota State mainly because she wanted to be near her father. Kelly dated, and eventually married in the second season, theater mime Stuart Rosebrock (Kris Kamm), whom Hayden could not stand. Their marriage ended in 1991 after Stuart, returning from filming his own kids TV show Buzzy the Beaver, told Kelly that he'd met another woman. While overtly supporting Kelly with her heartbreak, Coach Fox clandestinely couldn't have been happier to have 'Stu' out of both of their lives. After graduating from Minnesota State in 1993, Kelly got a job at a major ad agency job in New York. She was only seen in occasional guest spots thereafter. Much of Hayden's coaching job, besides mentoring his players, was working with his assistants Luther van Dam (Jerry van Dyke), a lifelong bachelor who often struggled with self-confidence and Michael "Dauber" Daubinski, a stereotypical "dumb jock" whose ongoing joke was he had not yet graduated Minnesota State despite being enrolled for several years, but would often surprisingly be of intellectual help to the team, usually learned from a class he was attending or that he was a fan of Nova. Another person Hayden could not stand was the ladies' basketball coach Judy Watkins, whom Hayden often got into prank wars with, but was complicated by the fact Dauber dated her until 1995 when she confessed to an affair after returning from a coaching job in France. Also seen throughout the run was Minnesota State athletic director Howard Burleigh (Kenneth Kimmins) and his nutty wife Shirley (Georgia Engel), who were close friends with Hayden and Christine. At the end of season 7, Hayden is offered a job with a fictional NFL expansion team called the "Orlando Breakers". Hayden agrees and takes his coaching staff with him for the final two seasons. The Foxes adopted a baby boy named Timothy (played by twins Brennan and Brian Felker). Many season 9 episodes focused on the couple's newfound joy of parenthood, as they had been unable to conceive a child together before they decided to adopt.

The series was originally intended to reflect the University of Minnesota, although the school would later retract its support. The creator and producer of the show, Barry Kemp, an alumnus of the University of Iowa paid homage to his alma mater by naming the main character of Coach (Hayden Fox) after the University of Iowa's long-time football coach Hayden Fry. Many of the exterior shots of "Minnesota State" are actually of the University of Iowa, usually of students walking around the Iowa Memorial Union in downtown Iowa City. The screen shot when returning from commercial breaks is of the outside of the Hillcrest dormitory. There are also numerous shots of Quadrangle Residence Hall as well as the Field House, which once served as the venue for University of Iowa basketball. 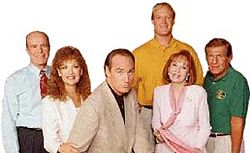 The Coach opening theme by J.A.C. Redford, which also served as the Minnesota State Screaming Eagles school song, bears more than a passing resemblance to the Minnesota March authored by John Phillip Sousa. The theme song was recorded by the Iowa State University Marching Band, and the band was also shown in the opening sequence of the show.[1][2]

In the 1993–1994 television season, Hayden Fox led his Minnesota State Screaming Eagles to victory in the Pioneer Bowl, held at the Alamodome, winning the National Championship. In real life, Florida State won the National Championship that season. The Alamodome opened in May 1993, in time for the real-life 1993 football season. However, the first Alamo Bowl and Pioneer Bowl games had not been played yet. Also, the real-life Pioneer Bowl is not even an NCAA Division I game, but rather is a postseason game played between the champions of two Division II conferences whose members are all historically black schools. Footage from the 1993 edition of the Wisconsin vs. Minnesota rivalry game played in the Metrodome was used for the actual game to represent Minnesota State and the fictional West Texas University (not to be confused with the real West Texas A&M University or Texas Western College, now known as UTEP). Al Michaels provides the commentary during the game.

In the 1995 season, Hayden Fox gets a chance to fulfill his ultimate dream and become the head coach of an NFL team. He accepts the head coaching position with the (fictional) expansion team the Orlando Breakers, owned by recent widow Doris Sherman (played by Katherine Helmond). Sherman, however, is more interested in making money off of the team as well as gimmicks (such as asking if Hayden would like to coach a basketball team she was thinking of buying after selling the Breakers and trading away their first round draft pick for a pair of cruise tickets) than she is in letting Coach Fox guide the Breakers to success on the football field. Nearly the entire crew from Minnesota State followed Fox to Orlando, including Luther and Dauber, who remained his assistant coaches. In the final season, Hayden is able to coach the Breakers to a wild card spot in the NFL Playoffs, but loses to the Buffalo Bills in that playoff game at Buffalo.

The name Orlando Breakers was a salute to the defunct USFL and the Portland Breakers, New Orleans Breakers, and Boston Breakers. The Breakers themselves were a parody of the fellow Florida-based Jacksonville Jaguars, who like the Breakers joined the NFL in 1995 as an expansion team and made the playoffs their second season as a wild card team and, like the Breakers, played the Bills in their first playoff game. (Unlike the Breakers, the Jaguars came out victorious, 30-27, eventually losing to the New England Patriots 20-6 in the AFC Championship Game.) In addition, an episode of Coach in which Sherman tries to move the Breakers to Los Angeles has shown to be a bit of foreshadowing for the Jaguars long after the series ended, as the Jaguars have since been mentioned as possibly moving to Los Angeles due to poor attendance in Jacksonville, Florida.[3][4] Another tie-in between the Breakers and the Jaguars was that the very first game the latter played in, the 1995 Pro Football Hall of Fame Game (against their expansion brethren the Carolina Panthers), aired on ABC, the same network as Coach.

The final episode of the sitcom aired on ABC on May 14, 1997. The final scene in the final episode featured the whole cast thanking the audience for nine years of the show, with cast member Jerry Van Dyke denying the series ending thinking the show must go on. But the cast and director finally tell Van Dyke that the show is truly over, with Van Dyke still denying the show's finale: as the lights go out, Van Dyke mumbles, "I'm still coming to work on Monday."

The final episode also includes an epilogue showing that Dauber succeeded Hayden as the head coach of the Breakers, winning back-to-back Super Bowl championships and going on to join the Monday Night Football announcing team after his retirement from football.

Reruns currently air on local syndication in select cities, and on Deja View and Comedy Gold in Canada. Reruns have previously aired on WGN America, USA Network, and TBS.

For season seven, ABC aired original episodes of Coach on Monday night, before Monday Night Football, as part of a football-themed night. This was successful on the United States East Coast, where MNF games aired from 9:00 pm – 12:30 am, local time. However, on the West Coast, MNF games aired from 6:00 pm – 9:30 pm (with possible overtime), leaving some Monday network programming with no time slots. During this interval, the show was aired at unusual hours on the West Coast. For instance, Seattle ABC affiliate KOMO aired new episodes of Coach on Saturday afternoons (coincidentally, ABC also aired college football games most of the time on Saturday afternoons). Some fans have cited this time-slot displacement on the West Coast as a reason for low ratings in season seven. Coach was moved to Tuesday nights the following season.

Universal Studios Home Entertainment has released the first three seasons of Coach on DVD in Region 1. Two different versions were released of the first season- a regular edition and a limited edition which featured special packaging (a playbook).[13] It is now confirmed that the fourth season will be released on March 15, 2011.[14]