Marginalization
This article is about the sociological concept. For concept in probability, see conditional probability. 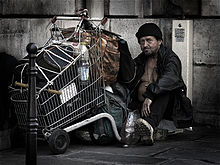 The homeless are often viewed as marginalized from "mainstream" society.

"The marginal man...is one whom fate has condemned to live in two societies and in two, not merely different but antagonistic cultures....his mind is the crucible in which two different and refractory cultures may be said to melt and, either wholly or in part, fuse." (Robert E. Park, Cultural Conflict and the Marginal Man in Everett V Stonequist, The Marginal Man, Introduction, New York: Charles Scribner's Sons, 1937)

Marginalization at the individual level results in an individual's exclusion from meaningful participation in society. An example of marginalization at the individual level is the exclusion of single mothers from the welfare system prior to the welfare reform of the 1900s. The modern welfare system is based on the concept of entitlement to the basic means of being a productive member of society both as an organic function of society and as compensation for the socially useful labor provided. A single mother's contribution to society is not based on formal employment, but on the notion that provision of welfare for children is a necessary social expense. In some career contexts, caring work is devalued and motherhood is seen as a barrier to employment (Lessa, 2006). Single mothers were previously marginalized in spite of their significant role in the socializing of children due to views that an individual can only contribute meaningfully to society through "gainful" employment as well as a cultural bias against unwed mothers. Today the marginalization is primarily a function of class condition.

There are also exclusions of lesbian-gay-bisexual-transgender (LGBT) and other intersexual people because of their sexual orientations and gender identities as individual marginalization. The Yogyakarta Principles require that the states and communities abolish any stereotypes about LGBT people as well as stereotyped gender roles.

"Isolation is common to almost every vocational, religious or cultural group of a large city. Each develops its own sentiments, attitudes, codes, even its own words, which are at best only partially intelligible to others." (Frederic Thrasher, The Gang: A Study of 1,313 Gangs in Chicago, University of Chicago Press, 1927)

A second example of marginalization at the community level is the marginalization of women. Moosa-Mitha (as cited in Brown & Strega, 2005) discusses the feminist movement as a direct reaction to the marginalization of white women in society. Women were excluded from the labor force and their work in the home was not valued. Feminists argued that men and women should equally participate in the labor force, in the public and private sector, and in the home. They also focused on labor laws to increase access to employment as well as to recognize child-rearing as a valuable form of labor. Today, women are still marginalized from executive positions and continue to earn less than men in upper management positions.[citation needed]

Some intellectuals and thinkers are marginalised because of their dissenting, radical or controversial views on a range of topics, including HIV/AIDS, climate change, evolution, alternative medicine, green energy, or third world politics. Though fashionable for a time to some, they are more widely regarded as intellectual freethinkers and dissidents whose ideas and views run against those of the mainstream. They are marginalised and abused, often systematically ostracized by colleagues, and in some cases their work ridiculed or banned from publication.[citation needed] Examples include Immanuel Velikovsky, Peter Duesberg, Susan George (political scientist), Martin Fleischman, Stanley Pons, Fred Hoyle, James Lovelock, E. F. Schumacher.

Material deprivation is the most common result of marginalization, when looking at how unfairly material resources (such as food and shelter) are dispersed in society. Along with material deprivation, marginalized individuals are also excluded from services, programs, and policies (Young, 2000). Ensuing poverty, psychoemotional damage, and its resulting diseases often result in catastrophic damage to lives, health, and psyche. In gay men, results of psychoemotional damage from marginalization from both heterosexual society and from within mainstream homosexual society include bug chasing (purposeful acts to acquire HIV),[1] suicide, and drug addiction.

Globalization (global-capitalism), immigration, social welfare and policy are broader social structures that have the potential to contribute negatively to one's access to resources and services, resulting in marginalization of individuals and groups. Similarly, increasing use of information technology and company outsourcing have contributed to job insecurity and a widening gap between the rich and the poor. Alphonse, George & Moffat (2007) discuss how globalization sets forth a decrease in the role of the state with an increase in support from various “corporate sectors resulting in gross inequalities, injustices and marginalization of various vulnerable groups” (p. 1). Companies are outsourcing, jobs are lost, the cost of living continues to rise, and land is being expropriated by large companies. Material goods are made in large abundances and sold at cheaper costs, while in India for example, the poverty line is lowered in order to mask the number of individuals who are actually living in poverty as a result of globalization. Globalization and structural forces aggravate poverty and continue to push individuals to the margins of society, while governments and large corporations do not address the issues (George, P, SK8101, lecture, October 9, 2007).

Certain language and the meaning attached to language can cause universalizing discourses that are influenced by the Western world, which is what Sewpaul (2006) describes as the “potential to dilute or even annihilate local cultures and traditions and to deny context specific realities” (p. 421). What Sewpaul (2006) is implying is that the effect of dominant global discourses can cause individual and cultural displacement, as well as an experience of “de-localization”, as individual notions of security and safety are jeopardized (p. 422). Insecurity and fear of an unknown future and instability can result in displacement, exclusion, and forced assimilation into the dominant group. For many, it further pushes them to the margins of society or enlists new members to the outskirts because of global-capitalism and dominant discourses (Sewpaul, 2006).

With the prevailing notion of globalization, we now see the rise of immigration as the world gets smaller and smaller with millions of individuals relocating each year. This is not without hardship and struggle of what a newcomer thought was going to be a new life with new opportunities. Ferguson, Lavalette, & Whitmore (2005) discuss how immigration has had a strong link to access of welfare support programs. Newcomers are constantly bombarded with the inability to access a country's resources because they are seen as “undeserving foreigners” (p. 132). With this comes a denial of access to public housing, health care benefits, employment support services, and social security benefits (Ferguson et al., 2005). Newcomers are seen as undeserving, or that they must prove their entitlement in order to gain access to basic support necessities. It is clear that individuals are exploited and marginalized within the country they have emigrated (Ferguson et al., 2005).

Welfare states and social policies can also exclude individuals from basic necessities and support programs. Welfare payments were proposed to assist individuals in accessing a small amount of material wealth (Young, 2000). Young (2000) further discusses how “the provision of the welfare itself produces new injustice by depriving those dependent on it of rights and freedoms that others have…marginalization is unjust because it blocks the opportunity to exercise capacities in socially defined and recognized way” (p. 41). There is the notion that by providing a minimal amount of welfare support, an individual will be free from marginalization. In fact, welfare support programs further lead to injustices by restricting certain behaviour, as well the individual is mandated to other agencies. The individual is forced into a new system of rules while facing social stigma and stereotypes from the dominant group in society, further marginalizing and excluding individuals (Young, 2000). Thus, social policy and welfare provisions reflect the dominant notions in society by constructing and reinforcing categories of people and their needs. It ignores the unique-subjective human essence, further continuing the cycle of dominance (Wilson & Beresford, 2000).

Upon defining and describing marginalization as well as the various levels in which it exists, one must now explore its implications for social work practice. Mullaly (2007) describes how “the personal is political” and the need for recognizing that social problems are in deed connected with larger structures in society, causing various forms of oppression amongst individuals resulting in marginalization (p. 262). It is also important for the social worker to recognize the intersecting nature of oppression. A non-judgmental and unbiased attitude is necessary on the part of the social worker. The worker must begin to understand oppression and marginalization as a systemic problem, not the fault of the individual (Mullaly, 2007). Working under an Anti-oppression perspective would then allow the social worker to understand the lived, subjective experiences of the individual, as well as their cultural, historical and social background. The worker should recognize the individual as political in the process of becoming a valuable member of society and the structural factors that contribute to oppression and marginalization (Mullaly, 2007). Social workers must take a firm stance on naming and labeling global forces that impact individuals and communities who are then left with no support, leading to marginalization or further marginalization from the society they once knew (George, P, SK8101, lecture, October 9, 2007).

The social worker should be constantly reflexive, work to raise the consciousness, empower, and understand the lived subjective realities of individuals living in a fast-paced world, where fear and insecurity constantly subjugate the individual from the collective whole, perpetuating the dominant forces, while silencing the oppressed (Sakamoto and Pitner, 2005).

These articles are supported by the Social Work WikiProject