While the chain has no official website, fan websites have been created including a list of current store locations. Supermarket News ranked DeMoulas/Market Basket No. 43 in the 2010 "Top 75 North American Food Retailers" based on 2009 fiscal year estimated sales of $3.0 billion.[2]

In 1916, Greek immigrants Athanasios ("Arthur") and Efrosini Demoulas opened a grocery store in Lowell, Massachusetts, specializing in fresh lamb. In 1954, they sold their store to two of their six children, Telemachus ("Mike") and George Demoulas. Within 15 years, the two brothers had transformed their parents' "mom and pop"-style store into a more modern supermarket chain consisting of 15 stores. 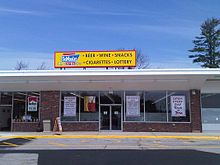 The last use of the name DeMoulas on a facade was on this former store in Salem, NH.

George Demoulas died of a heart attack in 1971 while vacationing in Greece, making Mike the sole head of the DeMoulas supermarket chain. Although each brother had promised to provide for the other's family in the event of his death, a lawsuit filed in 1990 by the heirs of George Demoulas claimed that Mike had defrauded them out of all but 8% of company stock by moving assets into shell companies, such as 'Market Basket Inc.' and 'Seabrook Sales Inc.' and claiming that these were separate companies from DeMoulas itself. The ensuing legal cases threatened to require the sale of the chain, most likely to Royal Ahold's Stop & Shop. In 1994, Judge Maria Lopez ruled that Mike Demoulas had defrauded George's family out of nearly $500 million, transferring 51% of Demoulas' stock to George's family.[3]

Mike Demoulas died in 2003 at age 82 and is buried in Andover, Massachusetts. In March 2006, Boston Magazine rated George's son, Arthur S. Demoulas, as Boston's eighth wealthiest person, with assets of $1.6 billion.[4] He was not listed in the Forbes 2008 edition. In early 2008, the board of directors elected Arthur T. Demoulas president of the corporation.

A separate company controlled by the Mike DeMoulas side of the family operated the Lee Drug chain from 1983 until it was sold to Walgreens in 1990; these stores were usually located in the same shopping center as a DeMoulas/Market Basket. The chain's corporate relationship to Mike DeMoulas's family interest in DeMoulas/Market Basket was cited in the 1990s litigation.

The interior of the largest Market Basket in Chelsea, MA.

Market Basket's main competitors include Hannaford, Shaw's, Stop & Shop, Trader Joe's, Whole Foods Markets, McKinnon's Market, and smaller, local markets, such as Butcher Boy, and, to some extent, FoodMaster (formerly Johnnie's FoodMaster). Though the chain is often called DeMoulas, all of its 66 stores now operate under the Market Basket name (the last of which, No. 6 in Salem, New Hampshire changed in spring 2010). Market Basket supermarkets are usually in shopping centers with other stores, often properties owned by the company through its real-estate arm, Retail Management and Development, Inc. Only two stores in the chain's history—number 38, in Plaistow, New Hampshire and number 11 in Andover, Massachusetts—have ever closed, although stores have closed in order to relocate to larger locations.

Market Basket has started adding Market's Kitchen to some of its existing stores and most of its new stores. Market's Kitchen offers submarine sandwiches, panini, rotisserie chickens, salads, and fried foods, as well as pre-made family-style meals. Many new stores also feature a dedicated seafood department that makes fresh sushi daily. Self checkouts do not exist in any store.

While Market Basket has stores near the borders of Rhode Island, Vermont, and Maine, no expansion into these states has yet been announced.