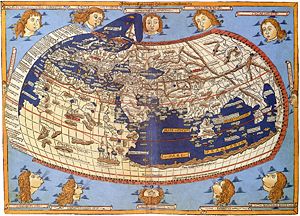 A printed map from the 15th century depicting Ptolemy's description of the Oecumene (1482, Johannes Schnitzer, engraver).

Ecumene (also spelled œcumene or oikoumene) is a term originally used in the Greco-Roman world to refer to the inhabited universe (or at least the known part of it). The term derives from the Greek οἰκουμένη (oikouménē, the feminine present middle participle of the verb οἰκέω, oikéō, "to inhabit"), short for οἰκουμένη γῆ "inhabited world".[1] In modern connotations it refers either to the projection of a united Christian Church or to world civilizations.

Eratosthenes of Cyrene (276-196 BC) deduced the circumference of the earth with remarkable accuracy. In his Geographia, Claudius Ptolemy (83 – 161 AD), refining existing knowledge of his day, provided a description of the known lands, and a calculation of the remainder of the Earth's surface. His Oecumene spanned 180 degrees of longitude from the so-called Blessed Islands (Μακάρων Νήσοι, probably the Cape Verde islands) in the Atlantic Ocean to the middle of China, and about 80 degrees of latitude from Shetland to anti-Meroe (east coast of Africa); Ptolemy was well aware that he knew about only a quarter of the globe, and an erroneous extension of China southward blocked off any awareness of the Pacific Ocean. Ptolemy knew that the oecumene, as then known, would not quite cover one-fourth of the calculated area of the globe. Having a love of symmetry, then, he predicted three additional continents along with the oecumene: Perioeci (lit. "same latitude, other side"), Antoeci (opposite the Perioeci) and Antipodes (lit., “opposite the feet”). The Greek cartographer Crates summed it all up on a globe created in about 150 BC.[2] 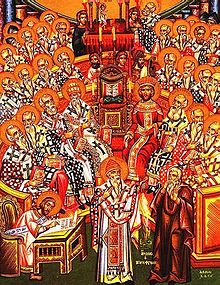 Over time, the word came to mean the civilized world, and to be synonymous with the Roman Empire. This usage continued after the division of the Empire into East and West, and the Byzantine Emperors would use the term to describe their imperial administration. Constantinople itself came to be known as the "Ecumenical City". The word was adopted within Christianity, especially for Synods called by the Emperors and composed of bishops throughout the world (see Ecumenical Councils). 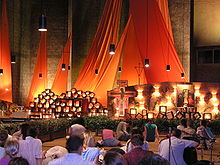 Ecumenical worship service at the monastery of Taizé.

In the twentieth century, the term has been employed to refer to Ecumenism, the promotion of unity or cooperation between distinct religious groups within Christianity. Within this context, it has been suggested there exists (or shall exist in the future) a single believing community amongst the various different Christian groups. This definition—and its presuppositions—is not accepted by every Christian group. The work of ecumenism takes place in the form of negotiations conducted between committees of various denominations and also through the deliberations of inter-denominational organizations such as the World Council of Churches. Relevant issues include Baptism, the Eucharist and Ministry.

In the context of cultural history, the term was first used in an academic sense by Lewis Mumford in his work, Technics and Civilization (1934)[5] and later popularised by William McNeill. In its modern cultural historic use, the term was popularised in McNeill's "Rise of the West" where he suggested that a single global oecumene was created through the dominance of European political institutions, science, technology, and economic forms, from the late 18th century onwards. One could argue that prior to the great voyages of discovery, initiated by Christopher Columbus, Vasco da Gama and Ferdinand Magellan, there were originally two separate world oecumenes - one covering north and east Africa, Eurasia and its surrounding Japanese, Indonesian and European archipelagos, and the other covering Mesoamerica, the South East of the USA, and the Andean region. It was the Spanish Conquistadores that fused this second oecumene within the first to create a single integrated "world system".