Invisible ink, also known as security ink, is a substance used for writing, which is invisible either on application or soon thereafter, and which later on can be made visible by some means. Invisible ink is one form of steganography, and it has been used in espionage. Other uses include anti-counterfeiting, property marking, hand stamping for readmission, children's games, and marking for the purpose of identification in manufacturing.

Invisible ink is applied to a writing surface with a specialty purpose stylus, stamp, fountain pen, toothpick, or even a finger dipped in the liquid. Once dry, the written surface should appear blank, with a similar texture and reflectivity as the surrounding surface. With letters, a cover message should be written over the invisible message, as a blank sheet of paper might arouse suspicion that an invisible message is present. This is best done with a ballpoint pen, since fountain pen ink may "run" when it crosses a line of invisible ink, thus betraying the presence of invisible ink. Invisible ink should not be used on ruled paper as it may similarly alter or streak the colour of the lines.

The ink is later made visible by different methods according to the type of invisible ink used. The ink may be developed by heat or by application of an appropriate chemical, or it may be made visible by viewing under ultraviolet light. Inks which are developed by a chemical reaction may depend on an acid-base reaction (like litmus paper), reactions similar to the blueprint process, or any of hundreds of others. Developer fluids may be applied using a spray bottle, but some developers are in the form of vapours, e.g. ammonia fumes used to develop phenolphthalein ink.

One can obtain toy invisible ink pens which have two tips—one tip for invisible ink writing, and another tip for developing the ink. Also, invisible ink is sometimes used to print parts of pictures or text in books for children to play with, particularly while they are travelling. A "decoder pen" is included with these books and children may rub this pen over invisible parts of texts or pictures, thus revealing answers to questions printed in regular ink or completing missing parts of pictures.

Security marker pens or UV Markers with fluorescent ink that glows when illuminated with a UV light may be used to invisibly mark valuable household items in case of burglary. They may be especially formulated for writing on non-porous surfaces such as glass, plastics, etc. The inks are applied and then identified using a black light or other UV light source. The owner of a recovered, stolen item which has been marked in this way can be traced simply by using an ultraviolet lamp. Security marker pens can be obtained commercially and are widely used as a crime countermeasure.

Some commercially available invisible inks glow very brightly, in a variety of colours, under UV light. This makes them suitable for use in readmissions such as hand stamping.

There is a commercially available red invisible ink which is only invisible when applied to certain types of surfaces, but visible on others.

Some vendors like now offer invisible ink for use in computer inkjet printers. Such inks are usually visible under ultraviolet light. Typical uses include printing information on business forms for use by the form processor, without cluttering up the visible contents of the form. For example, some United States Postal Service mail sorting stations use UV-visible ink to print bar codes on mailed envelopes giving routing information for use by mail handling equipment further down the line before delivery.

A non-toxic, full color invisible ink jet ink set has been developed by Vermont PhotoInkjet, LLC which is marketed under the Firefly brand. It has been pre-packaged for Epson printers. A creativity software has been developed by Vermont PhotoInkjet which allows both experienced and inexperienced computer artists to create artistic expressions which can only be seen under black light.

An E2E voting system called Scantegrity II uses invisible ink to enable the voter to obtain a confirmation code only for the voted selection.[1]

Properties of an "ideal" invisible ink

What an "ideal" invisible ink is depends on its intended use. For example, property marking should ideally be done with ink easily read under ultraviolet light, whereas in espionage such an ink would be considered too easily detectable since a large number of letters may be screened relatively quickly using UV light.

Invisible inks are inherently "insecure" against a determined and well-equipped inspector, which must be balanced against the logistical difficulty in carrying out mass-screening of posted mail. It is easier to perform large-scale undetected screening of millions of electronic communications, than to mass-screen even a small fraction of conventional mail. Apart from in dictatorships where large numbers of personnel are employed to spy on fellow nationals, screening of posted mail is only feasible in particular situations, such as letters to and from a particular suspect or facility.

From practical experience "6" and "9" were usually incompatible. SOE agents were trained not to risk their lives through reliance on insecure inks, most of which were of World War I vintage. In general, SOE used invisible inks as a back-up method of communication, for when more secure communication techniques were unavailable. The agency was known to supply special inks to its field agents, rather than have them depend upon improvisation from obtainable everyday chemicals. When agents were forced to improvise, they were to dilute their invisible ink as much as possible to reduce chances of detection.[2]

Any invisible ink can be made visible by someone who is sufficiently determined, but the limitation is generally time available and the fact that one cannot apply hours of effort to every single piece of paper. Thus successful use of invisible ink depends on not arousing suspicion that invisible ink may be present.

Telltale signs of invisible ink, such as pen scratches from a sharp pen, roughness, or changed reflectivity of the paper (either more dull or more shiny, usually from using undiluted ink), can be obvious to a careful observer who simply makes use of strong light, a magnifying glass and his or her nose. Also, key words in the visible letter, such as "red cabbage" or "heat", in an odd context may alert a censor to the presence of invisible ink. Invisible ink should not be used with glossy or very smooth paper types, since the sizing of these papers prevents ink from being absorbed deep into the paper and it is easily visible, especially if the paper is examined under glancing light. There are, however, commercially available inks for non-porous surfaces that are only visible under ultraviolet light and are otherwise virtually invisible on such surfaces.

Using either ultraviolet light or an iodine fume cupboard, messages can be quickly screened for invisible ink and also read without first permanently developing the invisible ink. Thus, if a censor uses this method to intercept messages, he or she may then let the letter be sent to the intended recipient who will be unaware that the secret message has already been intercepted by a third party.

A "screening station" could theoretically involve visual and olfactory inspection, an examination under ultraviolet light and then the heating of all objects in an oven before finally trying exposure to iodine fumes. In theory, some invisible inks may even show up using a camera sensitive to the infrared light spectrum.

For practical reasons, the inks are listed here according to their method of development. It must be understood however that some inks - particularly those of organic origin or those consisting of a mixture of several chemicals - may be made visible by several methods. For example, invisible writing with soap water may be made visible either by heat, reaction with phenolphthalein, viewing under ultraviolet light, or by placing the page inside an iodine fume cupboard.

Some of these are organic substances that oxidize when heated, which usually turns them brown. For this type of "heat fixed" ink, any acidic fluid will work. The most secure way to use any of the following substances for invisible ink is by dilution, usually with water, close to the point when they become difficult to develop.

The writing is rendered visible by heating the paper, either on a radiator, by ironing it, or by placing it in an oven. A 100-watt light bulb is less likely to damage the paper. 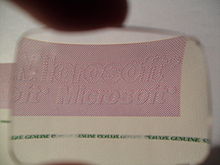 Detail of a software user manual security feature made with invisible ink.

In most cases, the substance changes color when mixed with an acid or base.

Some inks glow faintly (fluoresce) when under an ultraviolet lamp. This is a property of many substances, particularly organic substances and body fluids.

Other inks work in a near opposite way by absorbing ultraviolet light but without fluoresceing. When these are used on fluorescent paper, the inked areas fluoresce less than the surrounding paper area when under an ultraviolet lamp. This is especially a property of inks with a yellow tint.

Some UV-visible inks may be detected on a photocopy, due to the relatively strong ultraviolet component in light from the photocopier scanning head.

Examples of inks revealed by ultraviolet light are:

Inks which disturb the surface of paper

This includes virtually all invisible inks, but pure distilled water can also be used in this way. Application of any fluid will disturb the paper surface fibers or sizing.

Fumes created from heating iodine crystals will develop the writing, which will appear brown because the iodine sticks preferentially to the disturbed areas of the paper. Exposing the paper to strong sunlight will return the writing to its invisible state, as will using a bleach solution.

Slightly dampening paper with a sponge or by steam and then drying it before writing a message will prevent writing from being developed by this method, but overdoing dampening will result in telltale paper cockling.

Inks that are visible for a period of time without the intention of being made visible again are called disappearing inks. Disappearing inks typically rely on the chemical reaction between thymolphthalein and a basic substance such as sodium hydroxide. Thymolphthalein, which is normally colorless, turns blue in solution with the base. As the base reacts with carbon dioxide (always present in the air), the pH drops below 10.5 and the color disappears.[4] Pens are now also available that can be erased simply by swiping a special pen over the original text. Disappearing inks have been used in gag squirtguns, for limited-time secret messages, for security reasons on non-reusable passes, and for fraudulent purposes.[5][6]

As an indication of security, most inks mentioned above were already known by the end of World War I. However, in 1999, the U.S. Central Intelligence Agency successfully requested that a 1940s technical report on invisible ink remained exempt from mandatory declassification, based on the claim that invisible ink was still relevant to national security.[7] The report thus remained classified until 2011.[8][9]

In 2002, a gang was indicted for spreading a riot between federal penitentaries using coded telephone messages, and messages in invisible ink.[11]

In 2008, a British Muslim, Rangzieb Ahmed, was alleged to have a contact book with Al-Qaeda telephone numbers, written in invisible ink.[12]

Invisible ink is not only a product of conventional writing and analogue information storage. The term invisible ink could also be applied to texts and pamphlets, which have been deleted or censored on the internet due to moral and socio-political reasons. The “Digital Invisible Ink Toolkit” is also a Java steganography tool that can hide any sort of file inside a digital image.[13]