Chirality, pronounced //kaɪˈrælɪtiː// is a property of asymmetry important in several branches of science. The word chirality is derived from the Greek, χειρ (kheir), "hand", a familiar chiral object.

The term was first used by Lord Kelvin in an address in 1904. In a lecture given in Baltimore on "Molecular Dynamics and the Wave Theory of Light" he stated:

I call any geometrical figure, or group of points, 'chiral', and say that it has chirality if its image in a plane mirror, ideally realized, cannot be brought to coincide with itself.[1]

Human hands are perhaps the most universally recognized example of chirality: The left hand is a non-superimposable mirror image of the right hand; no matter how the two hands are oriented, it is impossible for all the major features of both hands to coincide.[2] This difference in symmetry becomes obvious if someone attempts to shake the right hand of a person using his left hand, or if a left-handed glove is placed on a right hand. The term chirality is derived from the Greek word for hand, χειρ (cheir). It is a mathematical approach to the concept of "handedness".

A chiral object and its mirror image are said to be enantiomorphs. The word enantiomorph stems from the Greek ἐναντίος (enantios) 'opposite' + μορφή (morphe) 'form'. A non-chiral figure is called achiral or amphichiral.

The helix (and by extension a spun string, a screw, a propeller, etc.) and Möbius strip are chiral two-dimensional objects in three-dimensional ambient space. The J, L, S and Z-shaped tetrominoes of the popular video game Tetris also exhibit chirality, but only in a two-dimensional space.

Many other familiar objects exhibit the same chiral symmetry of the human body, such as gloves, glasses (where two lenses differ in prescription), and shoes. A similar notion of chirality is considered in knot theory, as explained below.

Some chiral three-dimensional objects, such as the helix, can be assigned a right or left handedness, according to the right-hand rule.

A table of all prime knots with seven crossings or fewer (not including mirror images).

A knot is called achiral if it can be continuously deformed into its mirror image, otherwise it is called chiral. For example the unknot and the figure-eight knot are achiral, whereas the trefoil knot is chiral.

In physics, chirality may be found in the spin of a particle, which may be used to define a handedness (aka chirality) for that particle. A symmetry transformation between the two is called parity. Invariance under parity by a Dirac fermion is called chiral symmetry.

Animation of right-handed (clockwise), circularly polarized, light as viewed in the direction of the source, in agreement with Physicist and Astronomer conventions.

Electromagnetic wave propagation as handedness is wave polarization and described in terms of helicity (occurs as a helix). Polarization of an electromagnetic wave, is the property that describes the orientation, i.e., the time-varying, direction (vector), and amplitude of the electric field vector. For a depiction, see the image to the right.

A chiral molecule is a type of molecule that lacks an internal plane of symmetry and thus has a non-superposable mirror image. The feature that is most often the cause of chirality in molecules is the presence of an asymmetric carbon atom.[3][4]

The term chiral in general is used to describe an object that is non-superposable on its mirror image.[5]

In chemistry, chirality usually refers to molecules. Two mirror images of a chiral molecule are called enantiomers or optical isomers. Pairs of enantiomers are often designated as "right-" and "left-handed."

In anatomy, chirality is found in the imperfect mirror-image symmetry of many kinds of animal bodies.

In humans, chirality (also referred to as handedness or laterality) is an attribute of humans defined by their unequal distribution of fine motor skill between the left and right hands. An individual who is more dexterous with the right hand is called right-handed, and one who is more skilled with the left is said to be left-handed. It is also seen in the study of facial asymmetry. 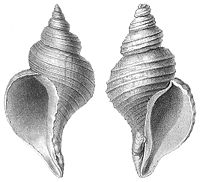 Other creatures, such as gastropods, exhibit chirality in the "handedness" of their coiled shells, resulting in an asymmetrical appearance. The majority of gastropod species (over 90 %)[6] have dextral (right-handed) shells in their coiling, but a small minority of species and genera are virtually always sinistral (left-handed). a very few species (for example Amphidromus perversus[7]) show an even mixture of dextral and sinistral individuals.