The Decalogue (Polish: Dekalog) is a 1989 Polish television drama series directed by Krzysztof Kieślowski[1] and co-written by Kieślowski with Krzysztof Piesiewicz, with music by Zbigniew Preisner.[2] It consists of ten one-hour films, each of which represents one of the Ten Commandments[3] (according to their Roman Catholic division) and explores possible meanings of the commandment—often ambiguous or contradictory—within a fictional story set in modern Poland. The series is Kieślowski's most acclaimed work[citation needed] and has won numerous international awards, though it was not widely released outside Europe until the late 1990s.[4] Filmmaker Stanley Kubrick wrote an admiring foreword to the published screenplay in 1991.[5] Artur Barcis in one of his nameless cameo roles, observing the characters of the first episode of The Decalogue series.

Though each film is independent, most of them share the same setting (a large housing project in Warsaw) and some of the characters are acquainted with each other. The large cast includes both famous actors and unknowns, many of whom Kieślowski also used in his other films. Typically for Kieślowski, the tone of most of the films is melancholic, except for the final one, which, like Three Colors: White, is a black comedy, and features two of the same actors, Jerzy Stuhr and Zbigniew Zamachowski.

The series was conceived when Piesiewicz, who had seen a 15th-century artwork illustrating the commandments in scenes from that time period, suggested the idea of a modern equivalent. Kieślowski was interested in the philosophical challenge and also wanted to use the series as a portrait of the hardships of Polish society, while deliberately avoiding the political issues he had depicted in earlier films. He originally meant to hire ten different directors, but decided to direct the films himself, though using a different cinematographer for each with exception of episodes III and IX, both cinematographed by Piotr Sobociński.[6]

There is also a nameless character, played by Artur Barciś, possibly supernatural, who observes the main characters at key moments but never intervenes (this character also appears in all episodes except 10).

Milk also plays as a symbol in some of the films:

The ten films are titled simply by number (e.g. Decalogue: One). In English, they are sometimes referred to by the commonly used short forms of the commandments based on the King James Bible text (see below), however the themes are fashioned after the commandments after the catholic ritual, considering the Polish religious background. According to Roger Ebert's introduction to the DVD set,[8] Kieślowski said that the films did not correspond exactly to the commandments, and never used their names himself. However, they appear to follow the order of the commandments found in Deuteronomy chapter 5.

(This list follows Catholic and Lutheran tradition; most other Christian denominations and Judaism follow the original division of the commandments as they are written in the Book of Exodus. Poland is predominantly Catholic.)

The Decalogue was admired by critics as well as by important figures from the movie industry such as Stanley Kubrick.[9] The DVD box issue holds 100% rating on Rotten Tomatoes based on 28 reviews.[10] The series was also praised by some of the renowned film critics, including Roger Ebert [11] and Robert Fulford.[12]

In the 2002 Sight & Sound poll to determine the greatest films of all time, The Decalogue and A Short Film About Killing received votes from 4 critics and 3 directors, including Ebert, New Yorker critic David Denby, and director Mira Nair.[13] Additionally, in the Sight & Sound poll held the same year to determine the top 10 films of the previous 25 years, Kieslowski was named #2 on the list of Top Directors, with votes for his films being split between Decalogue, Three Colors Red/Blue, and The Double Life of Veronique.[14] 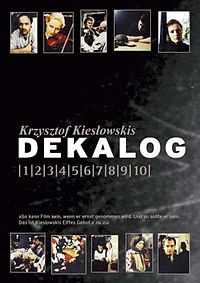 Kieślowski expanded Five and Six into longer feature films (A Short Film About Killing and A Short Film About Love), using the same cast and changing the stories slightly. This was part of a contractual obligation with the producers, since feature films were easier to distribute outside Poland. In 2000, the series was released on five DVDs, each containing two parts of about 2 hours.