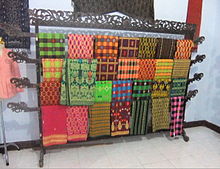 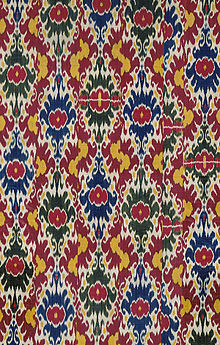 Ikat, or Ikkat, is a dyeing technique used to pattern textiles that employs a resist dyeing process similar to tie-dye on either the warp or weft fibres.

The defining characteristic of ikat is the dyeing of patterns, by means of bindings, into the threads before cloth construction, the weaving of the fabric, takes place. Herein lies the difference between ikat and tie-dye. In tie-dye the fabric is woven first and the resist bindings are then applied to the fabric which is dyed.

Double Ikat is where both warp and the weft are resist-dyed prior to stringing on the loom. Traditionally, and still commonly, a back-strap loom is used, though any variant or modern loom may be used.

Ikat is an Indonesian language word, which depending on context, can be the nouns: cord, thread, knot and the finished ikat fabric as well as the verbs "to tie" or "to bind". It has a direct etymological relation to Javanese language of the same word. Thus, the name of the finished ikat woven fabric originates from the tali (threads, ropes) being ikat (tied, bound, knotted) before they are being put in celupan (dyed by way of dipping), then berjalin (woven, intertwined) resulting in a berjalin ikat- reduced to ikat.

Rouffaer is attributed to introducing the term ikat into European language.[1] Ikat is now a generic English loan-word to describe either or both the process and the cloth itself- wherever and however the fabric may be woven or stylized through ethnic or the weaver's motives.

Linguistically, strictly speaking: the plural of ikat in Indonesian remains ikat. However, in English the Saxon suffix plural ('s') is commonly affixed, as in ikats and similarly in other languages. All are correct, though for orthography, this article favours the original Indonesian.

Ikat is a near universal weaving style common to many world cultures. Likely, it is one of the oldest forms of textile decoration.

In Central and South America, what is labeled as ikat is still common in Argentina, Bolivia, Ecuador, Guatemala and Mexico.

In the 19th century, the Silk Road desert oases of Bukhara and Samarkand (in what is now Uzbekistan in Central Asia) were famous for their fine silk Uzbek ikat. Ikat floral patterns are traditionally used in Europe on Mallorca, Spain.

India, Japan and many South-East Asian nations such as Cambodia, Myanmar, Philippines and Thailand have weaving cultures with long histories of Ikat production.

Ikat weaving styles vary widely. Many design motifs may have ethnic, ritual or symbolic meaning or have been developed for export trade. Traditionally, ikat are symbols of status, wealth, power and prestige. Because of the time and skill involved in weaving ikat, some cultures believe the cloth is imbued with magical powers.

The history of ikat

As woven fabric rarely survives for more than a few centuries it is extremely difficult, if not impossible, to determine where the technique of ikat originated. It probably developed in several different locations independently. Ikat was known to be produced in several pre-Columbian Central and South American cultures. 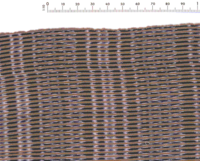 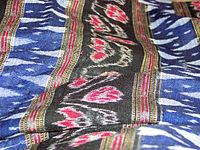 Ikat created by dyeing the warp are the more simple to make. First the material, be it cotton, silk, wool or other, is tied into bundles. The bundles may be covered with wax (as per batik), wrapped tightly with thread or some other dye-resistant material- to prevent unwanted dye permeation.

The resist dye procedure is repeated depending on the colouration desired of the warp bundle. Multiple colouration is common.

The newly dyed and thoroughly washed bundles are tied as the warped (longitudinal strings) onto the loom. The patterns are usually decided by the weaver as the warp threads are tied. Warp threads are adjusted for the desired alignment for precise motifs.

Some styles of ikat favour a blurred appearance. Guatemalan ikat is quite famous for this. South American and Indonesian ikat are known for such high degree of warp alignment that it may resemble printed, rather than woven cloth. Weavers will adjust the warp repeatedly as the weaving progresses to maintain pattern alignment.

The skill lies in the weaver acting essentially as a selective heddle who selectively manually picks up warp threads before passing the shuttle through the resultant "mini- shed".

Patterns result from a combination of the warp dye and the weft thread colour. Commonly vertical-axis reflection or "mirror-image" symmetry is used to provide symmetry to the pattern- more simply: whatever pattern or design is woven on the right, is duplicated on the left in reverse order, or at regular intervals, about a central warp thread group.

Patterns can be created in the vertical, horizontal or diagonal.

Weft ikat uses resist-dye for the weft alone. The variance in colour of the weft means precisely delineated patterns are more difficult to weave.

As the weft is commonly a continuous strand aberrations or variation in colouration are cumulative. Weft ikat are commonly employed where pattern precision is of less aesthetic concern than the overall resultant fabric. Some patterns become transformed by the weaving process into irregular and erratic designs. Guatemalan ikat is well-noted for its beautiful "blurs" in colouration.

The precise images of Japanese kasuri ikat are fine examples of weft ikat.

Double Ikat is where both warp and weft are resist-dyed.

This form of weaving requires the most skill for precise patterns to be woven and is considered the premiere form of ikat. The amount of labour and skill required also make it the most expensive, and many poor quality imitations flood the tourist markets. Indian and Indonesian examples typify highly precise double ikat.

Before the weaving is done, a manual process of winding of yarn called Asu needs to be performed. This process takes up to 5 hours per saree and is usually done by the womenfolk, who suffer tremendous physical strain due to constantly moving their hand back and forth over 9000 times for each saree. In 1999, a young weaver C Mallesham developed a machine which automated the Asu process, thus developing a technological solution for a decades-old unsolved problem. [2]

Oshima ikat is a uniquely Japanese ikat. In Oshima, the warp and weft threads are both used as warp to weave stiff fabric, upon which the thread for the ikat weaving is spot-dyed. Then the mats are unraveled and the dyed thread is woven into oshima cloth.

The Oshima process is duplicated in Java and Bali but known locally as ikat and is reserved for ruling royalty, notably Klungkung and Ubud: most especially the dodot cloth semi-cummerbund of Javanese court attire.

The Cambodian ikat is a weft ikat woven of silk on a multi-shaft loom with an uneven twill weave which results in the weft threads showing more prominently on the front of the fabric than the back.[3][4]

By the 19th century, Cambodian ikat was considered among the finest textiles of the world. When the King of Thailand came to the US in 1856, he brought as a gift for President Franklin Pierce fine Cambodian ikat cloth.[5] The most intricately patterned of the Cambodian fabrics are the sampot hol-skirts worn by the women—and the pidans —wall hangings used to decorate the pagoda or the home for special ceremonies.

Unfortunately, Cambodian culture suffered massive disruption and destruction during the mid-20th century Indochina wars but most especially during the Khmer Rouge regime. Most weavers were killed and the whole art of Cambodian ikat was in danger of disappearing. Kikuo Morimoto is a prominent pioneer in re-introducing ikat to Cambodia. In 1995, he moved from Japan and located one or two old lady weavers and Khmer Rouge survivors who knew the art and have taught it to a new generation.

In Thailand, the local ikat type of woven cloth is known as Matmi (also spelt 'Mudmee' or 'Mudmi').[6] Traditional Mudmi cloth was woven for daily use among the nobility. Other uses included ceremonial costumes. Warp ikat in cotton is also produced by the Karen and Lawa tribal peoples in northern Thailand.

This type of cloth is the favorite silk item woven by ethnic Khmer people living in southern Isaan, mainly in Surin, Sisaket and Buriram.[7]

Ikat patterns are common among the Andes peoples, and native people of Argentina, Bolivia, Brazil, Chile, Colombia, Ecuador, Guatemala, Mexico, Peru, and Venezuela. The famous Mapuche shawl or poncho of the "Huaso" cowboys of Chile are one of the most famous to the Westerner. Wool and cabuya fibre are the most commonly used. The Mexican rebozos are made from imported cotton, are warp ikat dyed with indigo using thread wrapping of warp for resist.

South American ikat textiles are commonly woven on a back-strap loom. Pre-dyed warp threads are a common item in traditional markets- saving the weaver much mess, expense, time and labour.[8] A South American innovation- which may also be employed elsewhere is to employ a round stick around which warp threads are wrapped in groups, thus allowing more precise control of the desired design.[9] The "corte"- is the typical wrap skirt used worn by Guatemalan women.

As of 2010, the government of the Republic of Indonesia announced it would pursue in 2011 UNESCO Intangible Cultural Heritage accreditation for its ikat weaving, along with songket, and gamelan having successfully attained this UNESCO recognition for its wayang, batik and the kris.[10]