Dragon*Con (also Dragon Con or DragonCon) is a North America multigenre convention, founded in 1987, which takes place once each year in Atlanta, Georgia. As of 2011, the convention draws attendance of 46,000, features hundreds of guests, encompasses five hotels in downtown Atlanta near Centennial Olympic Park, and runs thousands of hours of programming for fans of science fiction, fantasy, comic books, and other elements of fan culture. It is operated by a private for-profit corporation, with the help of a 1,500-member volunteer staff. Dragon*Con has hosted the 1990 Origins Game Fair and the 1995 North American Science Fiction Convention (NASFiC).[2]

Dragon*Con was launched in 1987, as a project of a local science fiction and gaming group, the Dragon Alliance of Gamers and Role-Players (DAGR). It was founded by a board of directors including John Bunnell, David Cody, Robert Dennis, Mike Helba, Pat Henry, and Ed Kramer.[3] The name "Dragon" for the club was derived from Kramer's Dragon Computer (a European version of Radio Shack's Color Computer), which hosted a local Bulletin Board System ("The Dragon") that initially served as a central hub for both organizations. The inaugural Dragon*Con flyers debuted at the 1986 Atlanta Worldcon, ConFederation. Within a year, Dragon*Con had been selected to be the host of the 1990 Origins convention,[1] to take place at the Atlanta Hilton. 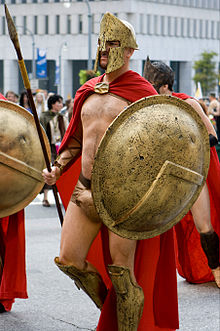 A Spartan in the 2007 Dragon Con parade

The convention grew rapidly. In 1989, it drew 2400 fans (many to see Guest of Honor Anne McCaffrey), and the event had moved to the Omni Hotel and Convention Center. In 1990, the convention had doubled again, added a Comics Expo, hosted the Origins convention, this time with Guest of Honor Tom Clancy, and expanded to include the Atlanta Sheraton hotel. In 1991 the first "Robot Battles" robotic competition event was added to the list of Dragon*Con events, making it the second oldest robotic competition event in the world.[4] 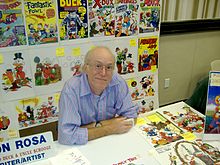 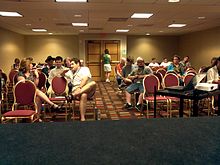 In 1998, Dragon Con established the Julie Award, in honor of Julius Schwartz, bestowed for universal achievement spanning multiple genres, selected each year by a panel of industry professionals. The inaugural recipient was science fiction and fantasy Grandmaster Ray Bradbury. Additional recipients of the award, presented by Schwartz each year prior to his death in early 2004, include Forrest Ackerman, Yoshitaka Amano, Alice Cooper, Will Eisner, Harlan Ellison, Neil Gaiman, Carmine Infantino, Anne McCaffrey, Jim Steranko, Peter David, and Paul Dini. It is also the host of the Dragon Con Independent Short Film Festival, the Futura Award (paying homage to the Fritz Lang masterpiece Metropolis), the Parsec Awards, and the Georgia Fandom Award, renamed in 2008 as the Hank Reinhardt Award, after its first recipient.

According to statistics provided by Georgia State University, Robinson College of Business, Dragon*Con brought in over $21 million[15] of direct economic impact to Atlanta in 2007, and an estimated $25 million in 2008. It also raises tens of thousands of dollars for charities and hosts a large blood drive.