The Schulze method is a voting system developed in 1997 by Markus Schulze that selects a single winner using votes that express preferences. The method can also be used to create a sorted list of winners. The Schulze method is also known as Schwartz Sequential Dropping (SSD), Cloneproof Schwartz Sequential Dropping (CSSD), the Beatpath Method, Beatpath Winner, Path Voting, and Path Winner.

The output of the Schulze method (defined below) gives an ordering of candidates. Therefore, if several positions are available, the method can be used for this purpose without modification, by letting the k top-ranked candidates win the k available seats. Furthermore, for proportional representation elections, a single transferable vote variant has been proposed.

Description of the method

The input to the Schulze method is the same as for other preferential single-winner election methods: each voter must furnish an ordered preference list on candidates where ties are allowed.

One typical way for voters to specify their preferences on a ballot (see left) is as follows. Each ballot lists all the candidates, and each voter ranks this list in order of preference using numbers: the voter places a '1' beside the most preferred candidate(s), a '2' beside the second-most preferred, and so forth. Each voter may optionally

Let d[V,W] be the number of voters who prefer candidate V to candidate W.

A path from candidate X to candidate Y of strength p is a sequence of candidates C(1),...,C(n) with the following properties:

Candidate D is better than candidate E if and only if p[D,E] > p[E,D].

Candidate D is a potential winner if and only if p[D,E] ≥ p[E,D] for every other candidate E.

Consider the following example, in which 45 voters rank 5 candidates. 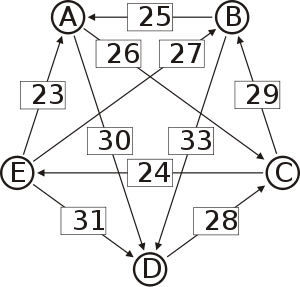 To help visualize the strongest paths, the diagram on the right-hand side shows an arrow from A to B with label d[A, B], in the style of a directed graph. (To avoid cluttering the diagram we only draw the majority of voters)

For each pair of candidates X and Y, the following table shows the strongest path from candidate X to candidate Y in red, with the weakest link underlined.

The only difficult step in implementing the Schulze method is computing the strongest path strengths. However, this is a well-known problem in graph theory sometimes called the widest path problem. One simple way to compute the strengths therefore is a variant of the Floyd–Warshall algorithm. The following pseudocode illustrates the algorithm.

When we allow users to have ties in their preferences, the outcome of the Schulze method naturally depends on how we interpret these ties in defining d[*,*]. Two natural choices are that d[A, B] represents either the number of voters who strictly prefer A to B (A>B), or the margin of (voters with A>B) minus (voters with B>A). But no matter how the ds are defined, the Schulze ranking has no cycles, and assuming the ds are unique it has no ties.[1]

Although ties in the Schulze ranking are unlikely,[2] they are possible. Schulze's original paper[1] proposed breaking ties in accordance with a voter selected at random, and iterating as needed.

An alternative, slower, way to describe the winner of the Schulze method is the following procedure:

Since the Schulze method satisfies the Condorcet criterion, it automatically fails the following criteria:

Likewise, since the Schulze method is not a dictatorship and agrees with unanimous votes, Arrow's Theorem implies it fails the criterion

The following table compares the Schulze method with other preferential single-winner election methods:

The main difference between the Schulze method and the ranked pairs method (both of which have tick the same boxes in the above table) can be seen in this example:

History of the Schulze method

In 2011, Schulze published the method in the academic journal Social Choice and Welfare.[1]

Use of the Schulze method

sample ballot for Wikimedia's Board of Trustees elections