A points method ballot design like this one is the most common for governmental elections using cumulative voting. Voters are typically instructed to make only one mark per column.

Cumulative voting is used frequently in corporate governance, where it is mandated by some (7) U.S. states. It was used to elect the Illinois House of Representatives[1] from 1870 until its repeal in 1980[2][3] and used in England in the late 19th century to elect some school boards. As of November 2009, more than fifty communities in the United States use cumulative voting, all resulting from cases brought under the National Voting Rights Act of 1965. Among them are Peoria, Illinois for half of its city council, Chilton County, Alabama for its county council and school board, and Amarillo, Texas, for its school board and College Board of Regents.[4] Courts sometimes mandate its use when they deem it necessary to provide fair representation; an example of this occurred in 2009 in Port Chester, New York.[5][6][7]

A form of cumulative voting has been used by group facilitators as a method to collectively prioritize options, for example ideas generated from a brainstorming session within a workshop. This approach is described as “multi-voting” and was likely derived from the nominal group technique and is one of many tools suggested within the Six Sigma business management strategy.[8]

In an equal and even cumulative ballot, as in Peoria, an individual's vote is fractionally divided evenly among all candidates for whom he or she indicates support. As the number of candidates increases, this can result in the need for computing sums of multiple fractions.

A cumulative voting election elects the top vote-getters, just as with a simple plurality election. However, voters are allowed to concentrate their full share of votes on fewer candidates than seats—unlike bloc voting, where a voter can only award one vote per candidate, up to the number of candidates as seats. With cumulative voting, voters are permitted to not split their votes and instead concentrate them on a single candidate at full value.

A more common and slightly more complex cumulative ballot uses a points method. Under this system, voters are given an explicit number of points (often referred to as "votes" because in all known governmental elections, the number of points equals the number of seats to be elected) to distribute amongst candidates on a single ballot. Typically, this is done with a voter making a mark for each point beside the desired candidate. A similar method is to have the voter write in the desired number of points next to each candidate. This latter approach is commonly used for corporate elections involving a large number of points on a given ballot, where the voter is given one set of points for each votable share of stock he has in the company. Unless an appropriately programmed electronic voting system is used, however, this write-in ballot type burdens the voter with ensuring that his point allocations add up to his allotted sum. 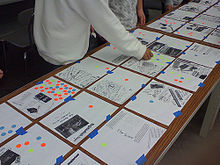 When used as a facilitation technique for group decision-making this process is often called “multi-voting”.[9] Participants are given stickers or points which they can apply among a list of options; often these are ideas that were generated by the group. Because dot stickers are commonly used for multi-voting, the process is also often called “dot voting”.[10]

In typical cumulative elections using the points system, the number of points allotted to a voter is equal to the number of winning candidates. This allows a voter potentially to express some support for all winning candidates; however, this need not be required to achieve proportional representation. With only one point the system becomes equivalent to a single non-transferable vote in a first-past-the-post system.

Other than general egalitarian concerns of electoral equality, there is nothing in this system that requires each voter to be given the same number of points. If certain voters are seen as more deserving of influence, for example because they own more shares of stock in the company, they can be directly assigned more points per voter. Rarely, this explicit method of granting particular voters more influence is advocated for governmental elections outside corporate management, perhaps because the voters are members of an oppressed group; currently, all governmental elections with cumulative voting award equal numbers of points for all voters.

While giving voters more points may appear to give them a greater ability to graduate their support for individual candidates, it is not obvious that it changes the democratic structure of the method.

The most flexible ballot (not the easiest to use) allows a full vote to be divided in any fraction among all candidates, so long as the fractions add to less than or equal to 1. (The value of this flexibility is questionable since voters don't know where their vote is most needed.)

Advocates of cumulative voting often argue that political and racial minorities deserve better representation. By concentrating their votes on a small number of candidates of their choice, voters in the minority can win some representation - for example, a like-minded grouping of voters that is 20% of a city would be well-positioned to elect one out of five seats. Both forms of cumulative voting achieve this objective.

In a corporate setting, challengers of cumulative voting argue that the board of directors gets divided and this hurts the company's long term profit. Using a staggered board of directors can diminish the ability of minority factions to obtain representation by reducing the number of seats up for election at any given time.[11]

Robert's Rules of Order Newly Revised, which asserts a principle that the majority should have the right to make all decisions, states, "A minority group, by coordinating its effort in voting for only one candidate who is a member of the group, may be able to secure the election of that candidate as a minority of the board. However, this method of voting, which permits a member to transfer votes, must be viewed with reservation since it violates a fundamental principle of parliamentary law."[12]

The Norfolk Legislative Assembly on Norfolk Island is elected using a form of cumulative voting where voters cannot give all their votes to one candidate. It is also used heavily in corporate governance, where it is mandated by some (7) U.S. states, and it was used to elect the Illinois House of Representatives from 1870 until 1980.[13] It was used in England between 1870 and 1902, under the Elementary Education Act 1870, to elect school boards. Starting in the late 1980s, it has been adopted in a growing number of jurisdictions in the United States, in each case to resolve a lawsuit brought against bloc voting systems.[14]

The formula to determine the number of shares necessary to elect a majority of directors is:

The formula to determine how many directors can be elected by a faction controlling a certain number of shares is:

with N becoming the number of directors which can be elected and X the number of shares controlled. Note that several sources include a variation of this formula using "X" rather than "(X-1)". Such a formulation does not assure you of having enough votes to elect a director if the "-1” is missing. Without the "-1" you will only be able to determine how many shares you must have to tie, not what you need to win. Of course not every shareholder votes perfectly every time, so the flawed formula may work in many practical instances despite it being conceptually flawed and mathematically wrong.

This is equivalent to the Droop quota for each seat desired.

Voters in a cumulative election can employ different strategies for allocating their vote.

Allotting more than one vote to the same candidate, or plumping, can make that individual more likely to win. The issue of "Plumper Votes" was much to the fore in the early 18th. c., when a candidate such as Sir Richard Child was returned for Essex in 1710 with 90% of his votes having been "Plumpers".[16] This was therefore a sign of his high popularity with the voters. The term is defined by the Oxford English Dictionary as: (verb) "to vote plump, to vote straight or without any qualification", (attrib.noun) "plumper vote, a vote given solely to one candidate at an election (when one has the right to vote for 2 or more)".[17]

Conversely, spreading out votes can increase the number of like-minded candidates who eventually take office.

The strategy of voters should be to balance how strong their preferences for individual candidates are against how close those candidates will be to the number of votes needed to win. Consequently, it is beneficial for voters to have good information about the relative support levels of various candidates, such as through opinion polling.

Voters typically award most, if not all, of their votes to their most preferred candidate[citation needed].

Some supporters of the single transferable vote method describe STV as a form of cumulative voting with fractional votes[citation needed]. The difference is that the STV method itself determines the fractions based on a rank preference ballot from voters and interactions with the preferences of other voters[citation needed]. Furthermore, the ranked choice feature of the STV ballot makes it unlikely that voters might split their votes among candidates in a manner that hurts their interests; with cumulative voting, it is possible to "waste" votes by giving some candidates more votes than necessary to win and by dividing votes among multiple candidates such that none of them win.