Meriden is a village and civil parish in the Metropolitan Borough of Solihull, West Midlands, England. It is located between Solihull and the city of Coventry, and is approximately 10 km (6.2 mi) from Birmingham International Airport.

The city of Meriden, Connecticut (near the centre of that state) is named after the village. 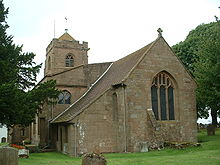 Until 1974 Meriden was part of Warwickshire. The surrounding countryside, known as the Meriden Gap, forms a green belt between the two urban areas of Birmingham and Coventry. It gives its name to the Meriden parliamentary constituency, which covers the Meriden Gap.

In the United Kingdom Census 2001 the population of the Meriden parish was 2,734.

It is possibly the site of an Iron Age field system.

The parish church is dedicated to St. Lawrence and was apparently founded by Lady Godiva. It has a Norman chancel with gargoyles on its roof and a golden weathercock.

Here the Heart of England Way long-distance path wends its way and brings the Staffordshire Heathlands together with the Cotswolds and Forest of Arden. 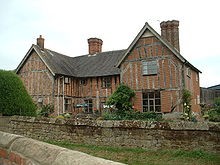 Meriden is also home to a memorial to all the cyclists who died in the First World War. An annual event, at which thousands of cyclists pay their respects to their fallen colleagues and commemorate these deaths, is held in the village. The memorial was unveiled on 21 May 1921, in the presence of over 20,000 cyclists.

Some moated farmsteads and several timber-framed buildings can be seen in the village. 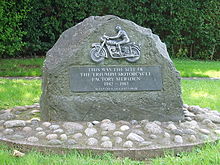 From 1941, Meriden used to be home to the large Triumph Motorcycles production plant, whose Priory Street factory in Coventry was earlier destroyed by the Luftwaffe during World War II.

As documented in the book, Forty Summers Ago, the factory was visited by Steve McQueen, Bud Ekins and the rest of the 1964 USA International Six Day Trials team to collect their specially prepared Triumphs. Richard Gere, in an interview promoting his 2002 film Chicago, also claimed to have picked up his Triumph motorcycle from the factory (misidentifying it's location), too, albeit in the mid-1970s whilst touring with the Grease stage production [1].

In 1973, Triumph workers blockaded the factory from the new owners, NVT, to prevent closure. The government loaned the subsequent Meriden Workers Co-Operative money to buy the factory and later to market the Triumph motorcycles they produced. Trading later as Triumph Motorcycles (Meriden) Ltd., the co-operative eventually closed in the early-1983, the factory being demolished the following year.[2] The new company, Triumph Motorcycles Ltd which was established in 1984, and moved to Hinckley, Leicestershire in 1988. 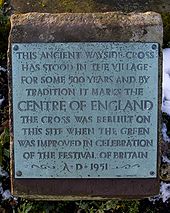 The village has claimed to be at the very centre of England, and a 500-year-old (some sources say 200-year-old) sandstone pillar-shaped monument to that effect stands in the village green. This medieval village cross is a grade II listed artifact.[3]

In 2002 the Ordnance Survey defined the Geographical Centre of England to be on Lindley Hall Farm, approximately 18 kilometres (11 mi) north at Fenny Drayton, Leicestershire.[4]

In 2003 the Ordnance Survey placed Church Flatts farm, approximately 35 kilometres (22 mi) north, at Coton in the Elms, Derbyshire, as the furthest point from the sea in Great Britain.[5][6]