The Type 97 Chi-Ha (九七式中戦車 チハ, Kyunana-shiki chu-sensha chiha?) was a medium tank used by the Imperial Japanese Army during the Second Sino-Japanese War, at Nomonhan against the Soviet Union, and in the Second World War. It was the most widely produced Japanese medium tank of World War II, although the armor protection was considered as average in the 1930s.[2] The 57 mm main gun, designed to support the infantry, was a carry over from the 1933 Type 89 medium tank. Later it was replaced by 47 mm gun more effective against enemy armor. The 170 hp Mitsubishi engine was a capable engine for the tank in 1938,[2] and – notably for the time – it was a nonflammable diesel. After 1941, the tank was considered less effective than most Allied tank designs.[1]

The Type 97's low silhouette and semicircular radio antenna on the turret distinguished the tank from its contemporaries. The crude suspension was derived from the Type 95 Ha-Go light tank, but used six road wheels instead of four.[2]

With the Type 89 Chi-Ro fast becoming obsolete in the late 1930s, the Imperial Japanese Army (IJA) began a program to develop a replacement tank for infantry support. Experience of the invasion of Manchuria determined that the Type 89 was too slow to keep up with motorized infantry.[4] The new medium tank was intended to be a scaled-up four-man version of the Type 95 Ha-Go light tank, although with a two-man turret, thicker armor, and more power to maintain performance.

The Tokyo factory of Mitsubishi Heavy Industries completed a prototype designated Chi-Ha. The second prototype was completed in June 1937. Although the requirement was for a 47 mm cannon, it retained the same short-barreled 57 mm cannon as the Type 89B tank.

However, at the time IJA was more interested in the lighter Chi-Ni prototype proposed by Osaka Army Arsenal, because it was less expensive[3][2] and had the same 57 mm gun.[1]

The Second Sino-Japanese War broke out on 7 July 1937. Peacetime budgetary limitations were removed, and the more expensive Mitsubishi Chi-Ha model was accepted as a new Type 97 medium tank.[3]

Type 97 hull was of riveted construction with the engine in the rear compartment. In the forward compartment, the driver sat on the right, and bow gunner on the left.[3] The commander's cupola was placed atop the turret. Internal communications were by 12 push buttons in the turret, connected to 12 lights and a buzzer near the driver.[3]

The Type 97 was initially equipped with a Type 97 57 mm main gun, the same caliber as that used for the earlier Type 89 I-Go tank. The cannon was a short-barreled weapon with a relatively low muzzle velocity, but sufficient as the tank was intended primarily for infantry support. The gun had no elevation gear.[citation needed]

The thickest armor used was 33 mm on the gun mantlet and 26 mm on the turret sides.[2]

Development of the improved Shinhoto Chi-Ha 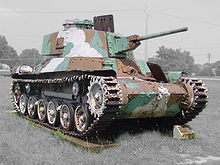 The shortcomings of the Type 97, with its low-velocity 57 mm gun, became clear during the 1939 Nomonhan Incident against the Soviet Union:[6] the 45 mm gun of the Soviet BT-5 and BT-7 tanks[7] outranged the Japanese tank gun, resulting in heavy Japanese losses. This convinced the Army of the need for a more powerful gun, and development of a new 47 mm weapon began in 1939 and was completed in 1941. The Type 1 47mm tank gun was designed specifically to counter the Soviet tanks.[8] The 47 mm gun's longer barrel generated much higher muzzle velocity, resulting in armor penetration superior to that of the 57 mm gun.[5] The new version, designated Type 97-Kai Shinhoto Chi-Ha, replaced the original model in production in 1942.[9] It had a new, larger turret – as a side note, a considerable number of existing 57-mm-gun turrets was subsequently re-used to create Type 4 Ke-Nu light tank.

The Type 97 medium tank was manufactured by Mitsubishi Heavy Industries (1,224 units) and Hitachi Industries (355 units),[citation needed] as well as some limited production in the Army's Sagami Arsenal. A total of 2,123 vehicles was constructed from 1938 to 1943, of which 1,162 units were the standard Type 97 and 930 units were the improved Type 97-kai version. The remainder were various specialized variants produced in small numbers.

The number of Type 97 medium tanks produced was slightly lower than of the Type 95 Ha-Go light tanks, but larger than any other tank fielded by Empire of Japan.[10] The following numbers of units were produced each year:

The last design that based directly on Type 97 lineage was the Type 3 Chi-Nu medium tank with a 75 mm main gun[11] of which 144 were built from 1944 to 1945. The Type 4 Chi-To was a separate design, the last Japanese medium tank design to be completed during the war, considered equivalent[12] to the German Panther tank, with only two vehicles made by war's end. By the time, the Japanese industry had been badly crippled by the American bombing campaign; as a result, few of these newer vehicles were ever built.

The IJA's need to supplement their tank divisions with artillery led to a need for self-propelled guns (SPGs), subsequently, the Type 97's chassis were utilized to manufacture nearly a hundred SPGs, consisting primarily of 75 mm guns.[13] Since the IJA's 1930's era tanks didn't have the firepower to penetrate the 1940s generation of allied armor, a need for tank destroyers arose; and experiments ranging from 47 mm to 120 mm guns were conducted.[14] However, due to naval priorities, raw materials for any IJA's production were limited.[15]

Wars against China and the Soviet Union

The Type 97 was deployed in Manchukuo (Manchuria) and China in combat operations in the Second Sino-Japanese War with considerable success, as the ill-equipped National Revolutionary Army of the Republic of China forces were limited to only three tank battalions consisting of British exports of the Vickers, German Panzer Mark I's, and Italian CV33 tankettes.[16] However, its first real test in combat against opposing armor came with the Nomonhan Incident (also known as the "Battles of Khalkhin Gol") in July 1939 against the Soviet Union. The IJA 1st Tank Corps consisting of the 3rd and 4th Tank Regiments (Yasuoka Detachment) had been assigned to the Nomonhan region, under the command of Lt. General Yasuoka Masaomi.[17] Of the two regiments, only the 3rd Tank Regiment had been supplemented with 4 of the new Type 97 medium tanks, of which one was selected as the regimental commander's tank during the Nomonhan campaign. During fierce fighting against the Red Army, in which the 3rd Tank Regiment was assaulting an objective ringed with strung coiled wire (piano wire),[18] the regimental commander, LTC Yoshimaru Kiyotake's Type 97 tank had become entangled up to its drive sprockets. Struggling to extract itself from the tank trap, LTC Yoshimaru managed to move his tank only about 40 yards rearward, when his machine became stopped completely.[19] Now exposed to Russian defensive positions, Yoshimaru's Type 97 was subjected to the fire of a dozen Soviet BT-7 tanks and anti-tank guns.[19] Russian shells struck the tank's drive gear, hull, and the engine area, causing the vehicle to erupt into flames. When the fire reached the tank ammunition, the tank exploded, throwing the turret several feet away from the hull (the turret was blown off).[20] Only the tank's gunner survived unwounded, abandoning the tank prior to the explosion. The 3rd Tank Regimental commander's body was recovered after the battle.[5]

From December 8 1941 and in early 1942, during the Battle of Malaya and the Battle of Singapore, Type 97 tanks were used by the 3rd Tank Group's 1st, 6th and 14th Tank Regiments under Lieutenant-General Yamashita's Army. The 1st Tank Regiment was attached to IJA 5th Division, which was among the first to land at Songkhla in southern Thailand. One of its medium tank companies was the 3rd Tank Company under First Lieutenant Yamane (ten Type 97 medium tanks and two Ha-Go light tanks), forming part of Saeki Detachment. The company was in the vanguard of the attack.

One key to the Japanese success in Malaya was the unexpected appearance of their tanks in areas where the British did not believe tanks could be used. The wet jungle terrain did not turn out to be an obstacle. Later, the 2nd and 14th Tank Regiments participated in the Burma Campaign.

During the Battle of Saipan, 36 Type 97s of the 9th Tank Regiment, commanded by Colonel Takashi Goto joined with Type 95s of the 136rd Infantry Regiment commanded by Colonel Yukimatsu Ogawa in an all-out counterattack against the US 6th Marine Regiment. This was one of the largest tank attacks mounted by Japan in the Pacific Theater of Operations, and was stopped by machine guns, mortars, bazookas, artillery, and naval gun fire. However, the Japanese Army seldom made major armored attacks during the Pacific War, due to the limited maneuvering areas that prevailed on islands in the South Pacific ocean. Terrain dictated the battle, and IJA tanks were emplaced where they could be the most effective, in hull defilade position (that is, buried up to their turrets).[21]

Many Type 97s were retained on the Japanese home islands in anticipation of an American invasion.

At the final Battle of Okinawa, 13 Type 95s and 14 Type 97 Shinhoto medium tanks of the 27th Tank Regiment were grossly outnumbered by 800 American tanks.[2] Similar conditions repeated in the Kwantung Army's defense against the Soviet invasion of Manchuria.

Some Japanese tanks remained in use, under new ownership, after the war. As late as 1949, the Chinese People's Liberation Army still had an appreciable number of Type 97s in its inventory.

Restored examples of the Type 97 are on display at the Yūshūkan Museum at Yasukuni Shrine in Tokyo, and at the Wakajishi Shrine in Fujinomiya, Shizuoka in Japan. The wreck of a Type 97 was found buried in the sand on the beach at Miura, Kanagawa in 2005. Overseas, preserved examples are at the People's Liberation Army Museum in Beijing, China and at the United States Army Ordnance Museum, Aberdeen, Maryland. Numerous ruined examples of the Type 97 can still be found on Saipan and on the Kuril Islands.