A pioneering French Antarctic research station, Port Martin, located 62 km east of D'Urville, was destroyed by fire on the night of January 23, 1952, without death or injury. In 1952, a small base was built on Île des Pétrels to study a rookery of Emperor Penguins. This base was called Base Marret. As the main base Port Martin was a total loss, Base Marret was chosen as overwintering site for 1952/1953. The new main base, Dumont D'Urville station, was built on the same island and opened on January 12, 1956, to serve as center for French scientific research during the Antarctic International Geophysical Year 1957/1958. The station has remained in active use ever since.

The station allows 30-40 people to come ashore at one time. Ice and strong katabatic winds often prevent landings, either by Zodiac or by helicopter. The station can accommodate about 30 winter-overs and 120 during the summer. The icebreaker ship Astrolabe carries supplies and personnel to the station from the port of Hobart, Tasmania. It does 5 round-trips between November and March.

The Academy Award-winning documentary film La Marche de l'empereur, released in English as March of the Penguins, was filmed in the region around this base. 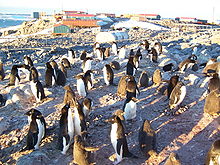 A colony of Adélie Penguins.

One of the main interest of the base is the study of wildlife, notably the Emperor Penguins.

In the summer, the rocks near the base serve as a refuge for the Adélie Penguin which comes here to reproduce. Skua, Snow Petrel, Giant Petrel, Cape Petrel also spend the summer near the base.

In the winter, only Emperor Penguins are staying to reproduce. However, around August, Giant Petrels are coming back to feed on Emperor Penguin chicks.

Some marine animals are equally present despite the negative temperature of the water.

Among the rare visitors of the archipel, we can spot other species of penguins, killer whales, and rorquals.

The base Dumont d'Urville is first and foremost a scientific base, even if nowadays the transportation of supplies to the Concordia Station represents an important part of the activity of the base.

Chemistry of the atmosphere

The laboratory in atmospheric chemistry of the base is used to analyse, among other things, sulfur compounds present in the atmosphere.

Nowadays, the study of Geophysics is less present in the base.

Nonetheless, several tools are still in use, notably a tide gauge, a cosmic rays detector, a GPS to measure the dip of the Antarctica into the Upper Mantle, and a LIDAR, which allows the analysis of the ozone depletion and the ozone holes.