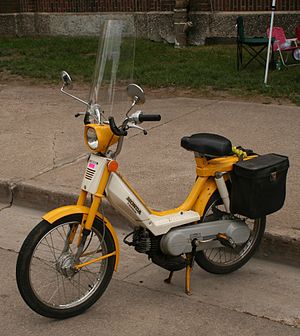 Mopeds are a type of low-powered motorcycle designed to provide economical and relatively safe transport with minimal licensing requirements.

Mopeds were once all equipped with bicycle-like pedals (the source of the term, motor + pedal), but moped has been increasingly applied by governments to vehicles without pedals, based on their restricted engine displacement, speed, and/or power output. Mopeds occasionally resemble powered bicycles, but most are now step-through designs (of both kinds, having either large or small wheels) and step-over designs similar to a regular motorcycle. Although mopeds usually have two wheels, in some jurisdictions low-powered three or four wheeled vehicles are also classified as mopeds.

In most countries, the legal driving age for a moped is lower than for regular motorcycles and cars. Mopeds are typically restricted to 50 km/h (30 mph) from a maximum engine displacement of 49 cc (3.0 cu in), though there are a few variations. 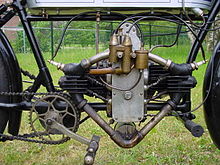 The term "moped" now only applies to low-power (often super-economy) vehicles, but pedals were fitted to some early motorcycles, such as the pictured 1912 Douglas. Pedalling away from stationary was a great improvement over "run and jump" and light pedal assistance (LPA) was valuable for climbing hills. Better transmissions with wider ranges, better clutches and much better engine performance made pedals obsolete on most motorcycles by 1918 but the pedals on mopeds remained valuable for their original purposes as late as the 1990s. 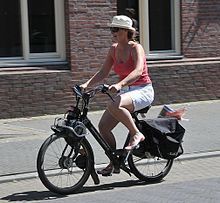 The earliest mopeds were bicycles with a helper motor in various locations, for example on top of the front wheel; they were also called cyclemotors. An example of that type is the VéloSoleX brand, which simply has a roller driving the front tire.

A more innovative design was known in the UK as the Cyclemaster. This had a complete powered rear wheel which was simply substituted for the bicycle rear wheel, which originated from a design by two DKW engineers in Germany. Slightly larger machines, commonly with a 98 cc (6.0 cu in) engine were known as autocycles. On the other hand some mopeds, such as the Czech-made Jawa, were derived from motorcycles.

A further category of low-powered two-wheelers exists today in some jurisdictions for bicycles with helper motors – these are often defined as power-assisted bicycles or motorized bicycles. Other jurisdictions may categorize the same machines as mopeds, creating a certain amount of confusion. In many countries three wheelers and microcars are classified as mopeds or variations thereof. This practise is not restricted to the third-world, France and Belgium classify microcars such as the Aixam similarly or as "light quadricycles".[1] 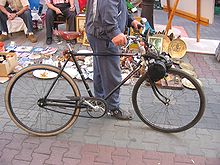 The original moped – a bike equipped with a motor

The word moped was coined by Swedish journalist Harald Nielsen in 1952, as a portmanteau of motor and pedal. It is however often claimed to be derived from "motorvelociped", as Velocipede is an obsolete term for bicycle that is still being used in some languages such as Russian.[2] According to Douglas Harper, the Swedish terms originated from "(trampcykel med) mo(tor och) ped(aler)", which means "pedal cycle with engine and pedals" (the earliest versions had auxiliary pedals).[3]

Other terms used for low-powered cycles include motorbicycle, motorized bicycle, motor-driven cycle, and goped (motorized inline skateboard with T-bar). In German, the terms Mofa (from Motor-Fahrrad, "motor-bicycle") and Mokick (equipped with kick-start) are also used. In Finnish, the common term is mopo (from moottoripolkupyörä, "motor-powered bicycle"). The term noped is sometimes used for mopeds that do not have pedals.

Safely riding a moped mostly requires the same considerations as safely riding a motorcycle but the lower speeds, while reducing some dangers, increases others. The biggest danger is that other traffic may not notice the presence of a moped - bright clothes and reflective fittings help.[4] Drivers may even see the moped, recognize it as harmless to them and simply forget it's there, pulling out of side-turnings into its path. Similarly, a car approaching a moped from behind will approach it more quickly than the driver expects, and the driver's attention may be more attuned to other automobile traffic rather than the moped, increasing the likelihood of an accident. This is a particular problem for mopeds used on high-speed roads where they may not be intended to travel.

Mopeds are often illegally tuned for higher speeds, powers or engine displacements than allowed. For this to be legal, such vehicles should be re-registered as motorcycles, and their driver's license requirements, insurance costs and minimum driver age would be higher. A tuned vehicle, not designed for higher speeds, is not as safe as a purpose-designed motorcycle. A survey of Finnish high school students found that 80% and 70% of their mopeds were tuned, for vocational and gymnasium students, respectively. Only 10% of trade school students had a moped to conformed to legistlation. The average maximum speed was 72 km/h, far higher than the legally allowable 45 km/h.[5]

Mopeds can achieve fuel economy of over 100 mpg-US (2.4 L/100 km; 120 mpg-imp). The emissions of mopeds have been the subject of multiple studies. Studies have found that two-stroke 50 cc mopeds, with and without catalytic converters, emit ten to thirty times the hydrocarbons and particulate emissions of the outdated Euro 3 automobile standards.[6][7] In the same study, four-stroke mopeds, with and without catalytic converters, emitted three to eight times the hydrocarbons and particulate emissions of the Euro 3 automobile standards.[6] Approximate parity with automobiles was achieved with NOx emissions in these studies. Emissions performance was tested on a g/km basis and was unaffected by fuel economy. Currently in the United States, the EPA allows motorcycles, scooters, and mopeds with engine displacements less than 280cc to emit ten times the NOx and six times the CO than the median Tier II bin 5 automobile regulations.[8][9] An additional air quality challenge can also arise from the use of moped and scooter transportation over automobiles, as a higher density of motorized vehicles can be supported by existing transportation infrastructure.[10]

The wide availability of previously-used but still functional small motorcycles in western societies enables and encourages cheap forms of racing, wrongly called moped racing. Dirt-racing forms of this sport is sometimes staged in the stadiums of agricultural shows, where, unlike football and athletic grounds, the surface is not too important. One popular series uses chicanes consisting of stacked large-diameter tractor tyres and requires a team of riders, each doing ten laps and then pulling into the middle of the ring for change-over. Two heats and a final, each lasting 25 minutes, can be held in one day interspersed with speedway racing and other displays. Another series once held on full-size race-tracks, including Le Mans, ran for 25 hours (typically 3.00pm one day until 4.00pm the next) and was billed as "the longest race in the world".