Clifton Hill is a suburb of Melbourne, Victoria, Australia, 4 km north-east from Melbourne's central business district. The border between Clifton Hill and Fitzroy North is Queens Parade and Smith Street. Merri Creek defines the eastern border of Clifton Hill. Its Local Government Area is the City of Yarra. At the 2006 Census, Clifton Hill had a population of 5386.

Clifton Hill was named after Clifton Farm, one of the first properties in the area. The word "Hill" was added by land developer John Knipe to spruik the new estate. The first subdivision of 64 freehold properties was auctioned by Knipe, George and Co. on 18 September 1871.[2]

For many years a centre of Melbourne's bohemianism, the suburb has undergone rapid gentrification in recent years. 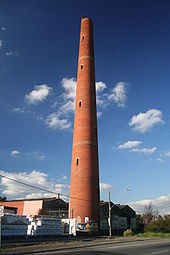 Accommodation in the suburb largely comprise of Victorian and Edwardian era dwellings. Hoddle Street bisects the suburb, dividing it into western and eastern precincts. The suburb is well served by parks and gardens, including Darling Gardens and Mayor's Park (western precinct) and Quarries Park (eastern precinct). An attractive local shopping strip is located along Queens Parade, on the border with Fitzroy North, consisting of mainly Victorian era shopfronts in a reasonable state of preservation. Dwelling density in Clifton Hill is significantly lower than the remainder of the former City of Collingwood, which also included the suburbs of Collingwood and Abbotsford.

Several bus routes run along Hoddle Street and interchange at the railway station.

Clifton Hill was the site of the 1987 Hoddle Street massacre.