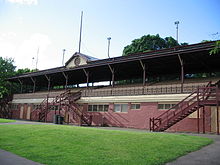 The grandstand at the W. T. Peterson Community Oval, built 1888

Fitzroy North is a suburb in Melbourne, Victoria, Australia, 4 km north-east from Melbourne's central business district. Its Local Government Area are the Cities of Yarra and Moreland. At the 2006 Census, Fitzroy North had a population of 11,069.

Merri Creek delineates the border between Fitzroy North and the neighbouring suburb of Northcote. Smith Street and Queen's Parade form the border with Clifton Hill.

Housing stock includes many fine one and two storey terraces, many dating to the late Victorian period and including characteristic ironwork, verandahs, and stone embellishments. This is one of Melbourne's finest, and most expensive, inner-city locations.John McMahon, twice Mayor of Fitzroy built firstly in 1886 two townhouses at 53/55 Alfred Crescent, and then in 1890 a large and impressive mansion at 75 Alfred Crescent. Both were designed by Olaf Nicholson, the architect. On one side of the crescent, is a large park, overlooked by John's and other houses called Edinburgh Gardens, with a famous football oval, bordered by Freeman Street, Brunswick Street, St Georges Road and Alfred Crescent. This park was saved for the people of Fitzroy by John McMahon when he obtained permanent possession during his first year of Mayorship. An attempt was made by the Government of which Mr.Vale was a member, to have a large portion of it excised for public housing. Mr. McMahon had Minister Gaunson permanently gazette the land for the people.John McMahon was also the chairman and founding president of the Fitzroy Football Club The Brunswick Street Oval was the home ground until 1967 of the Fitzroy Football Club playing in the Victorian Football League. A linear park, incorporating a section of the Capital City Trail bike path, runs along much of the northern edge of the suburb, on the easement for the Inner Circle railway line, which closed in 1948.

Fitzroy North (often called North Fitzroy) is theoretically joined to Fitzroy, but in reality the two are as separate as any suburbs in the inner city. They were always bisected by the width of Alexandra Parade (earlier Reilly Street), but with the building of the Eastern Freeway in the 1970s and its connection the Parade, the volume of traffic became an overwhelming barrier. Fitzroy North is also distinct in character, with less commercial activity, wider, quieter, leafier streets, and clear delineation to the east provided by the green Merri Creek corridor.

Most of Fitzroy North is single and double storey Victorian and Edwardian housing, comprising rows of terraces with a mixture of semi-attached and freestanding houses on small to moderately sized blocks. Large parts of the suburb are protected by heritage controls. The suburb is relatively intact and consistent in character, having had far less industrial and commercial development in its formative years than its southern namesake.

Fitzroy North also has some distinctive apartment complexes, mostly built within the last 15 years. Another, on St Georges Road at Park Street, is a redevelopment of the old Fire Station, with an extension at the back reminiscent of three concrete grain silos.

The main commercial activity in Fitzroy North is on Brunswick Street, St Georges Road and the northern side of Queens Parade, the latter having particularly wide footpaths for a Melbourne commercial strip. Piedimontes, at the corner of St Georges Road and Scotchmer Street is a well-established independent supermarket well-known for its continental delicatessen.

To get to North Fitzroy from the Melbourne CBD, you can travel on the