Chiriquí is a province of Panama, it is located on the western coast of Panama, and it is also the second most developed province in the country, after the Panamá Province. Its capital is the city of David. It has a total area of 6,490.9 km², with a population of 416,873 as of the year 2010[1]. The local government of Chiriquí is modeled after that of the United States. 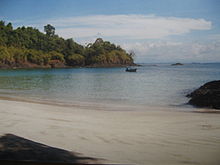 Chiriquí was first discovered in 1519 by Gaspar de Espinosa. The province was officially established on May 26, 1849, when Panama was still part of Colombia. Chiriquí was Abraham Lincoln's favored destination for Linconia, a project of colonization by free blacks. Chiriquí was the province in which Manuel Noriega rose in the military ranks which included helping bring Omar Torrijos back into the country after a coup.

To help he lined up jeeps with their lights on the runway in David to allow Torrijos' plane to land. Chiriqui was also the heart of a short lived pro-democracy guerrilla movement in the late 60's and early 70's. After the dictatorship by Manuel Noriega from 1983 to 1989, Guillermo Endara became president of Panama and gave the charge of governor of Chiriquí to Edgar De Puy.

The economy of Chiriquí is based principally on livestock and agriculture, making it the primary province of these materials for the rest of the country. Also, tourism is beginning to increase as the province becomes a destination for both domestic and foreign travel. its economy is made of corn and strawberries. Is a province with many economic rivalry. One major crop is mango. another economic activity is fishing.

The province features a variety of climates, from hot and humid lowlands to the cool and moist highlands.

The province is divided in 13 districts: