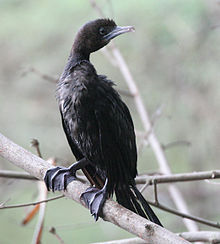 The Little Cormorant (Phalacrocorax niger) is a member of the Cormorant family of seabirds: Aptly named, the Little Cormorant is small in comparison with other cormorants, only 55 cm in length with an average mass of 442.5 g. [1] Salim Ali describes the Little Cormorant as a "glistening black duck-like water bird with a longish stiff tail and slender compressed bill sharply hooked at the tail."[2] It is a resident species in most of tropical south Asia, commonly found in Bangladesh, Bhutan, Cambodia, China, India, Indonesia, Lao People's Democratic Republic, Malaysia, Myanmar, Nepal, Pakistan, Sri Lanka, Thailand, and Viet Nam; additionally, it is a vagrant species in Afghanistan. The estimated population was 280,000 - 350,000 in 2009: Due to its large population and extremely wide geographic range the Little Cormorant is categorized as least concerned by the IUCN.[1] The Little Cormorant is not a migratory bird; it dwells year-round in trees near a water source. [1]

The breeding season of the Little Cormorant falls between May and October, with some minor “variations [due to] changes in the rainy season.”[3] The actual breeding of the Little Cormorant takes place in trees, typically in the company of Darters and Egrets.[3] At the beginning of the breeding season the male begins his advertisement or sexual display in order to attract a female: In this display, which “occurred repeatedly (2 to 9 times)…the neck was drawn back, the nape was almost or actually touching on the back, the bill was pointed upward, and the tail was spread....Within 1 to 2 days, the male started to display another step in which the wings of the advertised male were partly replaced on the back, the head was drawn back slowly, almost or actually touched the nape, threw forward in a hammer-like stroke, making a slight sound and back to the same positions repeatedly, [after which]… the head was perched…, the bill was opened a bit and the head and the neck feathers were ruffed out.”[4] The female response occurred within two days, and then the birds begin to display together: “the female jabbed with male’s bill, head, nape, rump, tail and calling. After 5 to 7 seconds, the male flew away and after 5 to 10 minutes he came back towards the female or sometimes the male flew away to another site and the female followed him and this was performed repeatedly. With this display the pair formation occurred permanently.”[4]

Over the course of its breeding season the Little Cormorant undergoes a variety of morphological changes: In both sexes, at the beginning of the breeding season the color of the feathers dull from black to grey, or as Naher describes they "became ashy with a short occipital crest" or head plume.[4] Also in both sexes, “the whole margin of the gular pouch was observed to become paler,…black bristles like plumes on either side of the beak and white eyelashes were found on the body of the birds,…and a white triangular patch [appears] on the head of the bird.”[3]

The nests of the Little Cormorant are often built in mixed colonies: some studies dissent on whether they mix with Storks and Egrets or Flying Foxes and Egrets, but they agree that they have mixed nesting colonies,[3] typically located in trees near some body of water .[1] This water source could be any type of water, natural or man-made: Little Cormorants have been observed nesting in trees near canals, drainage ditches, natural ditches, seasonally flooded agricultural lands, bogs, marshes, swamps, fens, peat-lands, freshwater lakes, freshwater marshes, rivers, streams, and creeks.[1] “In rare occasions nesting trees are found away from water bodies.”[3]

The Little Cormorant gathers a variety of plants to build its nests, depending on the geographical location: Of the vegetation used, the Little Cormorant uses most parts of the plant, but most often they use dry twigs from the plant, the dried plant in its entirety, or the stem of the plant; on occasion they do use dry fruit, leaves, and plant fiber but these are used much less often.[3] Little Cormorants construct their nests in a cup-like shape with a depression in the middle which vary considerably in size: “the outer diameter of the nest varies from 19-45cm,…the inner diameter of the cup ranges from 9-20cm,…and the depth of the cup [varies] from 4-8cm .[3] The male and female partner both take part in the collection and arranging of the nest, using their “breasts, legs, and bill to give the nest a proper shape. [3]

The Little Cormorant has a clutch size varying from 2-6 eggs; the birds typically lay eggs at one day intervals, but were sometimes “laid at an interval of two days.” [3] The eggs themselves are relatively pointed at one end and round at the other, measuring a length of 4-5 cm and a diameter of 2.5-3 cm. [3] When the eggs are first laid they are white to bluish-white in color, however, over the course of incubation they become slowly brown; the later in the incubation process the darker the egg.[3] The incubation process has been said to be between 22-26 days in past studies, however in a more recent study in Bangladesh the incubation period was from 14-21 days with a mean of 17 days; regardless of the length of the period, both the male and female take part in the incubation of the eggs.[3]

"Cormorants are almost exclusively fish-eaters;" they drive their prey towards inshore waters by beating the water with their wings and gradually close in on the fish.[2] Additionally, Cormorants are "foot-propelled pursuit drivers...well adapted to diving in shallow waters;" As such,they typically take a series of dives from the water’s surface interspersed with breathing breaks.[5] The Little Cormorant forages in inshore waters, "following a specific foraging pattern, consisting of perching near the inshore water prior to the beginning of the dive...[and then] dropping into the water;" after the first dive, the bird pauses for a short time to recover and then continues to alternate diving and resting for a period of time; the pauses and dive lengths vary with different environmental conditions such as water depth and tide level.[5] The foraging behavior and diving pattern of the Little Cormorant also varies significantly due to other environmental characteristics of the habitat, such as type of fish present or type of body of water.[5]