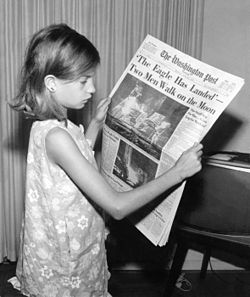 The Washington Post on Monday, July 21st 1969 stating 'The Eagle Has Landed—Two Men Walk on the Moon'.

The Apollo 11 mission was the first human spaceflight mission to land on the Moon. The mission's wide effect on popular culture was anticipated and since then there have been a number of portrayals in media along with incidental stories and folklore.

Details about the landing

Several books indicate early mission timelines had Buzz Aldrin rather than Neil Armstrong as the first man on the Moon.[1]

Armstrong claims to have said "That's one small step for a man, one giant leap for mankind" when he first set foot on the lunar surface. The "a" is not clear in NASA recordings but the audio and video links back to earth were somewhat intermittent, partly because of storms near Parkes Observatory. More recent digital analysis of the tape by NASA revealed the "a" may have been spoken but obscured by static.[2][3]

Neil Armstrong's PPK (Personal Preference Kit) carried a piece of wood from the Wright Brothers' 1903 airplane's left propeller and a piece of fabric from its wing,[4] along with a diamond-studded astronaut pin originally given to Deke Slayton by the widows of the Apollo 1 crew. This pin had been intended to be flown on Apollo 1 and given to Slayton after the mission but following the disastrous launch pad fire and subsequent funerals, the widows gave the pin to Slayton and Armstrong took it on Apollo 11.[5]

In Aldrin's book Men from Earth he wrote, "We discovered during a long checklist recitation that the ascent engine's arming circuit breaker was broken off on the panel. The little plastic pin (or knob) simply wasn't there. This circuit would send electrical power to the engine that would lift us off the moon...We looked around for something to punch in this circuit breaker. Luckily, a felt-tipped pen fit into the slot."

President Nixon spoke to Aldrin and Armstrong during their first walk on the surface of the moon, praising the astronauts and observing the unique importance of the mission.

Apollo 11 Goodwill Messages were statements from leaders of 73 countries around the world on a disc about the size of a 50-cent piece made of silicon that was left on the Moon by the Apollo 11 astronauts.

The mission was extensively covered in the press. Over 53 million households, or over 93%, tuned in to watch this mission on TV, and over 125 million viewers watched the moon landing. This broke the previous record of the most viewers, and launched the Apollo 11 coverage to be the most watched TV programming up to that date.[6]

William Safire prepared a speech called In Event of Moon Disaster for President Nixon to read on television if the Apollo 11 astronauts were stranded on the Moon.[7] According to the plans, Mission Control would "close down communications" with the LEM and a clergyman would have commended their souls to "the deepest of the deep" in a public ritual likened to burial at sea. Presidential telephone calls to the astronauts' wives were also planned. The speech originated in a memo from Safire to Nixon's chief of staff H. R. Haldeman in which Safire suggested a protocol the administration might follow in reaction to such a disaster.[8][9] The last line of the prepared text contained an allusion to Rupert Brooke's First World War poem, "The Soldier".[9]

The United States of America (U.S.) acknowledged the immense success of Apollo 11 with a national day of celebration on Monday, July 21, 1969. All but emergency and essential employees were allowed a paid day off from work, in both government and the private sector. Coincidentally, the last time this had happened was the national day of mourning on Monday, November 25, 1963 to observe the state funeral of President John F. Kennedy who had set the political goal to put a man on the moon by the end of sixties.

A replica of the footprint left by Neil Armstrong is located at Tranquility Park in Houston, Texas. The park was dedicated in 1979, a decade after the first moon landing.

During the mission, another major news story in the US media was the Chappaquiddick incident.

On September 16, 1962, the date Armstrong's selection as an astronaut was announced, his parents were flown to New York to appear on the television game show I've Got A Secret. After their secret was guessed, host Garry Moore commented "Wouldn't it be something if your son were the first man on the moon?" The episode has been shown on Game Show Network although Armstrong himself never saw it until his biographer brought him a copy of the tape.

The Australian movie, The Dish (2000), tells the (slightly fictionalised) story of how the images of the moon-walk were received by the radio telescope at Parkes Observatory, New South Wales.

The mission has been depicted in multiple films, including the 1996 television movie Apollo 11[10] and the 2009 film Moon Shot.

Portions of the Apollo 11 mission are dramatized in the HBO mini-series From the Earth to the Moon episode entitled "Mare Tranquilitatis". In that episode, Michael Collins made the following suggestion as to what Armstrong should say upon stepping onto the lunar surface: "If you had any balls, you'd say 'Oh, my God, what is that thing?' then scream and cut your mic."

In the British sitcom My Hero, the son of George and Janet chooses the name Apollo 11 (or Ollie for short) for himself because "It shows a link between two worlds," his father George being an alien on the show.

In the American animated television series Exosquad, the Able Squad briefly visits Tranquility Base during and after the Battle for the Moon.[11]

The opening scenes of the 1996 movie Independence Day[12] show an alien mothership passing low over the Apollo 11 landing site. The vibration of its passing erases the famous bootprint left on the soft lunar surface. (This is a scientific error, as the Moon's atmosphere, so thin it is often considered nonexistent, is unable to transmit sound, vibration or pressure waves.)

The 2008 animated film Fly Me to the Moon in centered around a fictional story of three flies that stow away on the Saturn V Rocket and manage to land on the moon.

Footage of the landing was famously used to introduce viewers to MTV, serving as its top and bottom of the hour ident during the cable channel's early years. MTV producers Alan Goodman and Fred Seibert used this public domain footage as a conceit, associating MTV with the most famous moment in world television history.[13] MTV also pays tribute to the classic ID by handing out astronaut statuettes (or "Moonmen") at its annual Video Music Awards.

The Apollo 11 landing site is featured in the Futurama episode "The Series Has Landed", with Fry and Leela sheltering from the lunar night in the Apollo 11 lunar module (which, according to a plaque, has been returned there by the "Historical Sticklers Society").

The Apollo 11 mission is used as part of the main story line in Transformers: Dark of the Moon as seen on a trailer released online. The movie described the mission as a means to investigate a meteor crash on the dark side of the moon, which turns out to be the Ark, the space vessel carrying one of the Autobots, Sentinel Prime.

The Apollo 11 mission, and more specifically the moment Neil Armstrong stepped onto the Moon's surface, plays a crucial role in the Doctor Who episode "Day of the Moon". The Doctor is shown altering wiring inside the Command Module on the launch pad, and video of the mission launch is also shown.

The Apollo Eleven is used as the name of a group of astronauts turned superhero in the Astro City comic book series.

Soon after the mission a conspiracy theory arose that the landing was a hoax but this notion is widely discounted by historians and scientists. It may have gained more popularity after the movie Capricorn One (1978) portrayed a fictional NASA attempt to fake a landing on Mars.

An urban legend suggests that they were being 'watched' while on the Moon and had seen alien vehicles in space. This grew in popularity after the book Somebody Else Is on the Moon was published.[14] Aldrin did spot an unidentified object travelling relative to them late in the third day of the mission. After learning from Mission Control that it couldn't be the S-IVB stage, since that was 6,000 nautical miles (11,000 km) away, they concluded that it was most likely one of four panels that had linked the spacecraft and the upper stage.[15] Later popular accounts often described this as a "UFO sighting" or claimed the widely reported incident had been "covered up."

At age 76, astronaut Buzz Aldrin said in a television documentary, "There was something out there, close enough to be observed, and what could it be?... Now, obviously the three of us weren't going to blurt out, 'Hey, Houston, we've got something moving alongside of us and we don't know what it is', you know?... We knew that those transmissions would be heard by all sorts of people and somebody might have demanded we turn back because of aliens or whatever the reason is."[16] [17][18] They may have seen the Luna 15 spacecraft which the Soviet Union had launched at about the same time as Apollo 11.[19]

There is a humorous and ribald urban legend that when Armstrong was a child, the wife of a neighbour named Gorsky, when asked by her husband to perform oral sex, had ridiculed him by saying "...when the kid next door walks on the moon!" and then decades later whilst walking on the moon Armstrong supposedly said "Good luck Mr. Gorsky" , but nothing about this anecdote is true. In 1995 Armstrong said he first heard the story in California when comedian Buddy Hackett told it as a joke.[20] This urban legend quote has been used in a humorous reference at the opening scene of Watchmen.