Fly Me to the Moon (film)

Fly Me to the Moon (film)

Infobox Film
name = Fly Me to the Moon 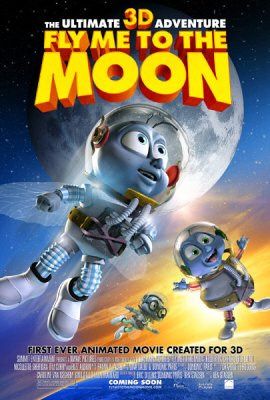 "Fly Me to the Moon" is a Belgian 3D feature film. It was released in digital 3D in on , and in the and on , . The film was also released in 3D in the USA and Canada starting , .

Fly Me to the Moon was directed by and produced by in association with , and distributed by and Vivendi Visual Entertainment.

The total production budget of "Fly Me to the Moon" is €17.3 million (about $25.2 million). nWave financed about 75% of the budget itself. To raise the rest, investors could benefit from Belgium’s Tax Shelter system. The Flanders Audiovisual Fund contributed €100,000 ($146,100), 10% of its annual budget for animation.

Apart from the feature-length version, two further versions of the films exist. The 49-minute "Attraction" version was released across theme parks starting in the summer of . Venues showing this version, which features added 4D effects, include Isla Magica in , Mirabilandia in , Bellewaerde in , Bakken in , and Blackpool Pleasure Beach in the , as well as the in and the in . This version of the film omits the subplot about the attempt by Russian flies to sabotage the mission. The 13-minute "Ride" version is featured at Six Flags Great Adventure in New Jersey and Six Flags Over Texas in Texas.

A -aged fly named Nat and his two best friends, I.Q. and Scooter, build a “fly-sized” rocket in a field across from , Florida, where the sits on its launch pad. From his earliest memory, Nat remembers his grandfather, Amos, telling him of his daring rescue of as she crossed the on her historic flight. Wanting to be an adventurer like his Grandpa, Nat knows what he has to do. Defying the notion that “Dreamers get swatted!” he tells his friends his plan to get aboard the Apollo 11 and go to the moon. His buddies, with some reluctance, are in. The next morning, as their families realize they are missing, the three flies make it to Space Center command. In their homemade space suits, Nat, I.Q. and Scooter stow away inside the space helmets of astronauts , and Michael Collins. As they blast off, our three tiny adventurers are about to make some history of their own.

Back on earth, Grandpa, Mom and the others watch TV to get news of their offspring’s adventure. As the astronauts appear on camera, the heroic flies wave in the background, visible to other flies but barely seen by humans – except for an attentive NASA team member, who informs Armstrong that there appear to be “contaminants” on board. One other problem: In far-away Russia, there are other flies watching TV - Russian flies that cannot tolerate American flies getting to the moon first. A Russian plan is hatched and operatives are enlisted to interfere with the US mission. Mother Russia puts all its hopes of success on the back of one nasty operative named Yegor. Fortunately, a pretty Russian fly named Nadia also sees the flies on board and hears Nat calling out his Grandpa’s name, the very name of the fly Nadia met in Paris and loved so many years ago.

Back on board the space ship, as the burn cycle to enter the moon's orbit begins, the capsule starts to shake violently. There’s a short circuit in a control panel that must be fixed manually or the ship won’t be able to complete its mission. Nat and I.Q. fly through a maze of wires, find the problem and repair it just in time. Unaware of the flies’ aid, the ship enters orbit and all is well... or so they think. Just as they congratulate each other, the little flies are sprayed with a numbing aerosol and are captives in a test tube vial – contaminants indeed.

The flies manage to break the vial. Nat sneaks into Armstrong’s helmet just in the nick of time. The Lunar Module lands on the surface of the moon. From inside the helmet, Nat beams with every awe-inspiring historic step. I.Q. and Scooter join him on the surface inside Aldrin’s helmet. Back on earth, other plots are being set in motion. After more than 50 years apart, Nadia finds Grandpa, though the joy of their reunion is brief. She tells Grandpa and Nat’s Mom about the Russian plot to divert the mission to crash directly into Mount Rushmore. Yegor must be stopped. Nat’s Mom faints while Grandpa takes off with a renewed youthful vow to save his grandson. At Mission Control, the Russian operatives have infiltrated and are preparing to alter the descent codes. Unaware of the potential danger looming, the astronauts and the little flies sit back and prepare to come back home as heroes.

Grandpa, Nat’s Mom and Nadia join forces to stop Yegor and the Russian plan as Apollo 11 hurtles closer and closer toward earth. In a series of death-defying stunts, they crush the Russian threat. Apollo 11 splashes down safely in the Pacific Ocean, the world still totally unaware of the three little flies on board who made it all possible. Returning as heroes, the three little flies share a slogan embraced by all: “Adventure forever! Dreamers get swatted? Never!”

At the end the real explains that there were not really flies on the flight.

Based on 50 reviews, Rotten Tomatoes reported that 18% of critics gave positive reviews.One person said,"The animation is so stiff it makes look like Walt Disney's ." [ http://www.rottentomatoes.com/m/10009249-fly_me_to_the_moon/ "Fly Me To The Moon" at .]