The bridge gives its name to Lea Bridge Road; and also to eponymous wards in the boroughs of Hackney (Leabridge Park) and Waltham Forest (Lea Bridge).

As early as 1582, a road known as Mill Fields Lane ran from Clapton to Jeremy's Ferry, at the same spot a timber bridge was built in 1745, and the road became known as Lea Bridge Road, with a tollgate at the Clapton end.[1] A new tollhouse was installed on the west bank of the river in 1757; and the bridge rebuilt in iron in 1820–1. Tolls continued to be levied until 1872.

There are few crossing points for the Lea Marshes, and the road remains a major bottleneck at some times of day, as the nearest major river crossing to the south is at Hackney Wick and to the north at Tottenham Hale. Lea Bridge Road is an important thoroughfare in the area.

In spite of the traffic, the area is well supplied with open space, dominated by Millfields recreation grounds, south of which is the site of the old coal-fired Millfields power station, now disused except as a sub-station. This was built in 1901, well before the creation of the National Grid in 1938, a period when power had to be generated near to the consumer. This provided electric street lighting throughout the then Metropolitan Borough of Hackney. 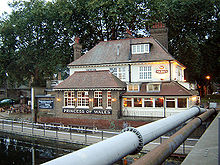 The Princess of Wales from Lea Bridge - a much-valued oasis. (October 2005)

Lea Bridge gives ready access to the lower reaches of the extensive Lee Valley Park, which stretches for about 42 kilometres (26.1 mi) on both banks of the river. Next to the south side of the bridge are two public houses, the "Princess of Wales" and "The Ship Aground". To the south are the Hackney Marshes; and a short distance to the north, are the Walthamstow Marshes and Nature Reserve. Below the bridge, the natural river flows over the Middlesex Filter Beds Weir, marking the boundary with Leyton and providing the supply for the former East London Waterworks Company. The old Middlesex Filter Beds have also been converted into a nature reserve; and on the Leyton-side, the corresponding Essex Filter Beds are now a reserve for birds. The Lee Navigation continues south in an artificial channel known as 'Hackney Cut', to the next lock at Old Ford Lock (about 1.7 miles), where the natural channel rejoins the Navigation, after its 2 miles (3.2 km) meander towards Leyton.

Leyton Orient F.C. originated as a team for Homerton College, in Homerton, playing on the marshes; and adopting Lea Bridge Road for a time, before settling at Brisbane Road.

For details of education in Lea Bridge, see List of schools in the London Borough of Hackney.

Districts within the London Borough of Hackney.