Menahem Mendel Beilis, 1874 – July 7, 1934, (sometimes spelled Beiliss[1]; Russian: Менахем Мендель Бейлис, Yiddish: מנחם מענדל בייליס) was a Ukrainian Jew accused of ritual murder (see Blood libel) in Kiev in the Russian Empire in a notorious 1913 trial, known as the "Beilis trial" or "Beilis affair". The process sparked international criticism of the antisemitic policies of the Russian Empire. Beilis's story was the basis for Bernard Malamud's novel The Fixer, which won both the Pulitzer Prize and the National Book Award.

Menahem Mendel Beilis was born into an observant Jewish family, but he was not religious himself and worked regularly on the Sabbath and the Holidays. In 1911 he was an ex-soldier and the father of five children, employed as a superintendent at the Zaitsev brick factory in Kiev.

On March 12, 1911, a 13-year-old Ukrainian boy Andrei Yushchinsky disappeared on his way to school. Eight days later his mutilated body was discovered in a cave near a local brick factory.

Beilis was arrested on July 21, 1911, after a lamplighter testified that the boy had been kidnapped by a Jew. A report submitted to the Tsar by the judiciary regarded Beilis as the murderer of Yushchinsky.

Menahem Beilis spent more than two years in prison awaiting trial. Meanwhile, a vicious antisemitic campaign was launched in the Russian press against the Jewish community, with accusations of the blood libel and ritual murder.

Among those who wrote or spoke against false accusations of the Jews were Maxim Gorky, Vladimir Korolenko, Alexander Blok, Alexander Kuprin, Vladimir Vernadsky, Mykhailo Hrushevsky, Pavel Milyukov, Alexander Koni, and others. 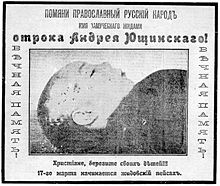 One of antisemitic fliers distributed in Kiev before the Beilis Trial. The caption reads "Orthodox Russian people, commemorate the name of the youth Andrey Yushchinsky who was martyred by kikes! Memory eternal! Christians, guard your children!!! On March 17, the Pesach of kikes begins." 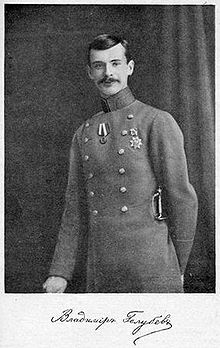 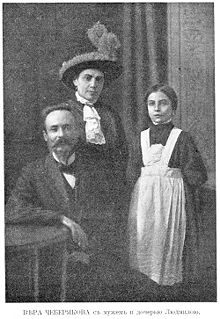 Nikolai Krasovsky - detective, who has found true murderers of Yushchinsky

Beilis with his family

During the pre-trial period in 1911−1912 the investigation was conducted by Nikolay Krasovsky (Николай Александрович Красовский), the foremost investigator of the Kiev Police Department. Krasovsky forsook any prospect of promotion and continued his investigation in spite of resistance and sabotage from the circles interested in railroading Beilis; he eventually refused to participate in the outright falsification of the case and was fired.

Krasovsky continued his investigation privately, assisted by his former colleagues from the Kiev Police Department. They eventually were able to determine the actual killers of Yushchinsky, who were professional criminals: Rudzinsky, Singayevsky, Latyshev, and Vera Cheberyak, whose son Yevgeny was a friend of Yushchinsky's.

On 30-31 May, 1912, reports were published in Kiev's newspapers. Immediately after this, Krasovsky was arrested on charges of official misuse allegedly committed in 1903 but acquitted by a court.

The trial took place in Kiev from September 25 through October 28, 1913. The prosecution was composed of the government's best lawyers. Professor Sikorsky of Kiev State University (father of Igor Sikorsky, the inventor of the helicopter), a medical psychologist, testified as an expert witness for the prosecution that in his opinion it was a case of ritual murder.

One prosecution witness, presented as a religious expert in Judaic rituals, was a Catholic priest, Justinas Pranaitis from Tashkent, well known for his antisemitic 1892 work Talmud Unmasked. Pranaitis testified that the murder of Yushchinsky was a religious ritual, associating the murder of Yushchinsky with the blood libel, a hoax believed by many Russians at the time. One police department official is quoted as saying:

The course of the trial will depend on how the ignorant jury will perceive arguments of priest Pranaitis, who is sure about the reality of ritual murders. I think, as a priest he is able to talk with peasants and to convince them. As a scientist, who defended a thesis about this question, he will give props to the court and prosecution, though nothing can be guessed in advance yet. I became acquainted with Pranaitis and am firmly convinced that he is the person who knows the problem, about which he will talk, in depth... Everything, then, will depend on which arguments priest Pranaitis will furnish, and he has them, and they're shattering for the Jewry.[2]

Beilis was represented by the most able counsels of the Moscow, St. Petersburg, and Kiev bars: Vasily Maklakov, Oscar Gruzenberg, N. Karabchevsky, A. Zarudny, and D. Grigorovitch-Barsky. Two prominent Russian professors, Troitsky and Kokovtzov, spoke on behalf of the defense in praise of Jewish values and exposed the falsehood of the accusations, while professor of Kiev Theological Seminary Orthodox Christian philosopher Alexander Glagolev affirmed that "the Law of Moses forbids spilling human blood and using any blood in general in food." The well-known and respected Rabbi of Moscow, Rabbi Mazeh, delivered a long, detailed speech quoting passages from the Torah, the Talmud and many other books to conclusively debunk the testimony of the prosecution "experts".[3]

The lamplighter, on whose testimony the indictment of Beilis rested, confessed that he had been confused by the secret police.

Pranaitis' credibility rapidly evaporated when the defence demonstrated his ignorance of some simple Talmudic concepts and definitions, such as hullin,[1] to the point where "many in the audience occasionally laughed out loud when he clearly became confused and couldn't even intelligibly answer some of the questions asked by my lawyer."[3] A Tsarist secret police agent is quoted, reporting on Pranaitis' testimony, as saying:

Cross-examination of Pranaitis has weakened evidentiary value of his expert opinion, exposing lack of knowledge of texts, insufficient knowledge of Jewish literature. Because of amateurish knowledge and lack of resourcefulness, Pranaitis' expert opinion is of very low value. Professors Troitskij and Kokovtsev, who were interrogated today, gave conclusions which are exceptionally positive for the defence, praising doctrines of the Jewish religion, and not accepting even a possibility of a religious murder by Jews ... Vipper thinks that acquittal is possible.[2]

The prosecution's case was further undermined after it had spent a great deal of effort to link the 13 wounds which Professor Sikorsky had discovered on the body with the importance of the number thirteen in "Jewish ritual," only to have it revealed later that there were actually 14 wounds on the body.[3]

The chief prosecutor A.I. Vipper made antisemitic statements in his closing address. There are conflicting accounts of the 12 Christian jurors: seven were members of the notorious Union of the Russian People, also known as the Black Hundred. There was no single representative of the intelligentsia in the jury. However after deliberating for several hours, the jury acquitted Beilis.

The Beilis trial was followed worldwide and the antisemitic policies of the Russian Empire were severely criticized. The Beilis case was compared with the Leo Frank case in which an American Jew, manager of a pencil factory in Atlanta, Georgia, was convicted of raping and murdering 12-year-old Mary Phagan and lynched after his sentence was commuted to life imprisonment.

After his release Beilis with his family left Russia for Palestine, then a province of the Ottoman Empire. In 1920 he settled in the United States where in 1925 he self-published an account of his experiences, The Story of My Sufferings. The book was later translated into English and Russian. 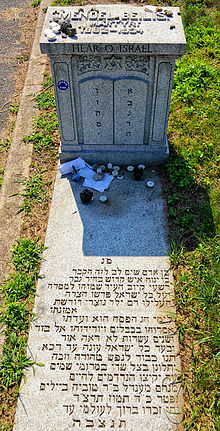 Beilis died unexpectedly at a hotel in Saratoga Springs[4] on 24 Tammus 5694 (July 7, 1934) and was buried two days later at the Mount Carmel in Queens, NY. Leo Frank and Sholem Aleichem are also buried there. Read English translation of the epitaph on Beilis' footstone.

In the March 2006 issue (No. 9/160) of the Ukrainian Personnel Plus magazine by the Interregional Academy of Personnel Management (commonly abbreviated MAUP), an article "Murder Is Unveiled, the Murderer Is Unknown?"[5] revives false accusations from the Beilis Trial, stating that the jury recognized the case as ritual murder by persons unknown, even though it found Beilis himself not guilty.[5]

In film and Literature