Dave Carter (August 13, 1952 – July 19, 2002) was an American folk singer-songwriter who described his style as "post-modern mythic American folk music."[1] He was one half of the duo Dave Carter and Tracy Grammer, who were heralded as the new "voice of modern folk music" in the months before Carter's unexpected death in July 2002.[2] They were ranked as number one on the year-end list for "Top Artists" on the Folk Music Radio Airplay Chart for 2001 and 2002, and their popularity has endured in the years following Carter's death.[3] Joan Baez who went on tour with the duo in 2002 spoke of Carter's songs in the same terms that she once used to promote a young Bob Dylan:

"There is a special gift for writing songs that are available to other people, and Dave's songs are very available to me. It's a kind of genius, you know, and Dylan has the biggest case of it. But I hear it in Dave's songs, too.[2]

Carter's songs were often noted for their poetic imagery, spirituality and storytelling while retaining connection to the country music of his southern American upbringing. Carter's memory has been kept alive by his many admirers, most notably his former partner. Tracy Grammer has continued to introduce previously unrecorded songs and recordings that the duo were working on prior to Carter's death.

Dave Carter was born in Oxnard, California. His father was a mathematician and a petroleum engineer and his mother was a science teacher and a charismatic Christian.[4] Carter was raised in Oklahoma and Texas and would draw on his rural upbringing in many of his songs. He studied classical piano from age 4 to about age 12, when he took up guitar. At 17, he left home to hitchhike around the country, especially the Midwestern United States (Great Plains area). After graduating with degrees in music (cello) and fine arts from the University of Oklahoma, he moved to Portland, Oregon, where he continued his education at Portland State University, earning a degree in mathematics. He began an advanced degree in mathematics, but a personal epiphany led him to realize that this was not to be his field.[5] He went on to study what he called "the psychology of mystical experience" at the Institute of Transpersonal Psychology in Palo Alto and the California Institute of Integral Studies in San Francisco,[4] and worked as an embedded systems programmer for several years before taking up music full-time in the mid-1990s. Carter was greatly influenced by mythologist Joseph Campbell, who visited his college, and American mystic Carlos Castaneda. He was also influenced by the American landscape, Arthurian mythology, the environment, and transcendental psychology. 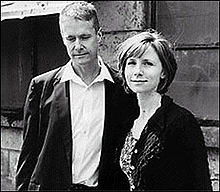 Prior to his death, Carter released three albums with Grammer: When I Go (1998); Tanglewood Tree (2000); and Drum Hat Buddha (2001). The duo re-recorded many of the songs from Snake Handlin' Man, plus two previously unrecorded songs, in early 2002. The CD, called Seven Is the Number, was released by Tracy Grammer in 2006. A collection of the duo's holiday recordings called American Noel was compiled by Tracy Grammer and released in 2008 by Signature Sounds.

Carter died of a massive heart attack Friday July 19, 2002 in a hotel room in Hadley, Massachusetts[6] after returning from an early morning run.[7] He and Grammer were slated to play that weekend at the Green River Festival in Greenfield[8] and were booked that summer to play many of the nation's top folk festivals and folk clubs. He was 49. Carter's death came as a great shock to the folk music community. Tracy Grammer gave her account of Carter's final moments in a letter to fans:

"Yesterday, shortly after he went unconscious, he came back for a lucid minute or two to tell me, 'I just died... Baby, I just died...' There was a look of wonder in his eyes, and though I cried and tried to deny it to him, I knew he was right and he was on his way. He stayed with me a minute more but despite my attempts to keep him with me, I could see he was already riding that thin chiffon wave between here and gone. He loved beauty, he was hopelessly drawn to the magic and the light in all things. I figure he saw something he could not resist out of the corner of his eye and flew into it. Despite the fact that every rescue attempt was made by paramedics and hospital staff and the death pronouncement officially came at 12:08 pm Eastern Time, I believe he died in my arms in our favorite hotel, leaving me with those final words. That's the true story I am going to tell."[9]

Many had predicted that the duo was destined for success beyond the typical folk music circles. Jim Olsen, president of Carter's record label, Signature Sounds, said, "I always believed it would only take one cover by a major star to unveil his work to the rest of the world; and I was convinced that was going to happen. Somebody was going to open the door for them; and the thing about Dave's music is that once people heard it, they became lifelong fans."[10] Fellow folksinger and journalist Matt Watroba wrote, "It would make sense at this point, to say that Dave Carter was on the verge of something big. The truth, however, is that Dave was something big already. He moved the people lucky enough to know him or his music in a way that has launched an outpouring of tributes, memories and love."[11]

Grammer decided to keep the duo's appointment to play the 2002 Falcon Ridge Folk Festival the following week and a tribute concert was arranged.[12] The tribute included performances by a number of Carter's admirers singing his songs. Highlights included Chris Smither's cover of "Crocodile Man", Mark Erelli singing "Cowboy Singer", a rendition of "Happytown" by The Kennedys, and "Farewell to Saint Dolores" by Eddie From Ohio. Grammer herself opened the show with "The Mountain" and closed with "Gentle Soldier of My Soul". Several artist have since written tributes in Carter's honor (see below) and in 2005 Grammer released Flower of Avalon, including nine previously unrecorded songs by Carter.

Dave Carter's songs have been covered by many others, perhaps most notably by Joan Baez ("The Mountain") and by Lucy Kaplansky ("Cowboy Singer") and Chris Smither ("Crocodile Man"). Tributes to him following his death were written by Tracy Grammer ("The Verdant Mile") and Richard Shindell ("So Says the Whippoorwill"), among others.

One song, "Gentle Arms of Eden", was added to the hymnal in at least one Unitarian Universalist congregation. More of Carter's songs were recorded by Tracy Grammer on her 2005 album Flower of Avalon.

Songs written by Dave Carter performed by other artists:

Songs written by other artists as tributes to Dave Carter: