Virginia "Pepper" Potts is a fictional character, a supporting character and a love interest of Iron Man in the Marvel Comics Universe. She first appears in Tales of Suspense #45 (September 1963) and was created by Stan Lee and Don Heck.

In 2007, she joined the Fifty State Initiative under the codename Hera, and after being given her own suit of armor by Tony Stark, assumed the codename Rescue in The Invincible Iron Man #14.

She is portrayed by Gwyneth Paltrow in the films Iron Man and Iron Man 2.

Pepper, originally in the secretarial pool, gets her job by fixing an accounting mistake made by Stark himself. Pepper is originally infatuated with Tony and responds to the attentions of Stark's chauffeur and assistant Happy Hogan with caustic remarks. This, almost immediately after her first appearance, coupled with Stark's growing affection for her, puts her in a love triangle between Stark and Hogan. Pepper is for a time interested in Iron Man, unaware that he and Stark are the same person. However, she eventually falls in love with and marries Hogan, eloping with him in Tales of Suspense #91, though that relationship is not without its troubles. 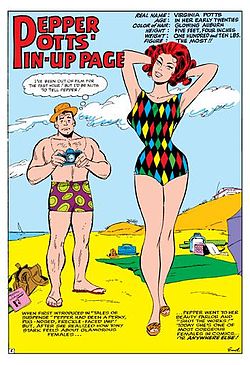 Pepper and Happy eventually leave Stark Industries settling in the Rocky Mountains and then finally in Cleveland where they adopt children after being unable to conceive, and disappear from the main Iron Man storyline. After being kidnapped by Obadiah Stane (Stark's rival), Pepper tells Tony to stay out of their lives. Pepper and Happy soon divorce after she had an affair with a former college boyfriend. After Tony Stark's return from the Heroes Reborn universe, Pepper and Happy join Tony at his new company Stark Solutions and once again become core characters. After some time, Happy and Pepper once again became involved and remarry, eventually considering conceiving a child to supplement their adopted children. Stark entrusted Pepper with a special remote that could shut him down. However, Pepper was tortured and was forced to hand it over. The trauma caused her to miscarry. Iron Man was able to deal with the remote, but felt guilty that he had placed her in such danger. After Happy sustains massive injuries in a fight with Spymaster during the Civil War story arc, Pepper requests that Tony turn off Happy's life support. The final pages of Invincible Iron Man (vol. 4) #14 shows the apparent death of Happy; it is debated as to whether Tony actually complied with Pepper's request as the only link between Happy's heart failure and Tony is the fact that they are side by side in the panel.

After the events of the superhuman "Civil War", Pepper joined the Fifty State Initiative as a member of 'The Order', a government sanctioned superhero team operating within California. She assumed the moniker of the Greek goddess Hera and used advanced computer hardware and prosthetics to monitor and coordinate the team's missions. Upon the absorption of The Order into the Initiative, Tony Stark offers her a job on the special projects team at Stark Enterprises, which she accepts.

Pepper Potts resumes her activities as personal secretary of Tony Stark. When Ezekiel Stane (Stane's son) causes an explosion during a party hosted by Stark in Taipei, Pepper is trapped under debris and wounded by shrapnel. Suffering severe multiple internal injuries, she is far too weak to withstand a prolonged surgery, so Tony embeds a strong magnet (similar in appearance to the arc reactor of the movie) in her chest, essentially turning Pepper into a cyborg dependent on keeping her chest magnet engaged to stay alive, as he was once.[1]

Pepper survives the less invasive procedure, but it is uncertain when, or if, the magnet can ever be removed. Pepper's body is further enhanced with new cybernetics and upgrades to the magnet, and she fears she is losing her humanity and has become a weapon. Tony tells her the enhancements are not based on Stark technology or weapons-based, but from Danny Rand's design for a new battery. Comforted by this, Pepper embraces her enhancements, exploring her new magnetic powered abilities, like gliding over magnetic lines.[2]

When Tony is blamed for the Skrull invasion, S.H.I.E.L.D. is taken over by Norman Osborn, replaced with H.A.M.M.E.R. and Tony and Maria Hill are fired, along with the rest of the S.H.I.E.L.D. employees. Tony realizes that Osborn is after the secret identities of heroes, and he decides to go underground with Maria, and also to wipe the knowledge in his own brain. Tony makes Pepper the new CEO of Stark Industries, trusting only her to shut down the company in his absence. Pepper discovers a secret room in Tony’s office which contains a suit of armor that he made especially for her. When Osborn issues an arrest warrant for Tony and sends teams to seize all Stark Industries facilities, Pepper uses this suit to escape just before she herself is arrested.[3]

While Pepper practices using her new suit, instructed by an on-board artificial intelligence patterned after the persona of Edwin Jarvis, a large earthquake hits and she rescues a group of students just before their school collapses on them. This causes her to be detected by H.A.M.M.E.R., and Osborn orders a large commercial jet near her to be shot down just to see what her suit is capable of. Pepper successfully catches the plane, but when she brings it to the nearest airport she is arrested by H.A.M.M.E.R. agents. Interrogated by Osborn, Pepper states that all components of her armor are legal and that the design specifications are available to anyone. She also insists she does not know where Tony is. Despite Osborn threatening her loved ones with prison if she interferes with his search for Tony or attempts any more heroic actions, after being freed she takes off to find Tony herself.[4]

While meeting with the doctor who implanted her chest magnet, JARVIS informs her of a grain silo explosion, with the victims "calling for immediate rescue," which inspires Pepper to adopt "Rescue" as a codename. After helping, she heads to Russia, where she finds Tony. His mental condition deteriorated due to his progressive mind-wipe, Tony does not initially recognize the suit he gave Pepper and attacks her, believing she is an enemy sent by Osborn.[5]

Tony eventually recognizes Pepper and halts his attack. Reunited, they sleep together, but are captured and tortured by Madame Masque, who was assigned by Norman Osborn to track Tony down. Tony admits that he had loved Masque in the past,[6] but when pressed to make a choice, with his own life on the line, Tony chooses Pepper. While the Rescue armor, controlled by JARVIS, restrains Masque, Pepper urges Tony to escape while she delays their attacker. As he flees to Afghanistan, Masque and Pepper go hand-to-hand with each other.[7]

Defeating Masque, Pepper disguises herself as the former, infiltrating H.A.M.M.E.R. while presenting the Rescue armor to Osborn as spoils of battle. Pepper reveals herself when she rescues Black Widow and Maria Hill from Avengers Tower, while the Rescue suit uploads a virus into the H.A.M.M.E.R. mainframe, taking control of the Helicarrier's armory of suits.[8] They then retrieve the hard drive that Hill was assigned by Stark to get, escaping to give it to Captain America.[9] As part of "re-booting" Tony (who has gone into a vegetative state), the magnet in her chest is removed and placed into his.

Tony's memories have to be restored from a years-old backup that he made of them, meaning that he no longer remembers the events of the superhuman Civil War nor his role in it and its aftermath. Equally, it means that he does not remember his affair with Pepper. Pepper survives the removal of her chest device, but demands that a new one similar to Tony's own chest repulsor be re-installed, which is done. Recovered, Tony also gifts Pepper with a new set of the Rescue armor, complete with JARVIS installed, as before.[10]

When Justine Hammer and her daughter Sasha Hammer use their own armored enforcer Detroit Steel to attempt to sabotage Stark Resilient (Tony's new company) and its design for a repulsor technology-powered vehicle, Pepper dons the Rescue suit and joins War Machine in helping Tony. Realizing that Detroit Steel and the accompanying drones are homing in on repulsor energy, Rescue and War Machine power down their armors, including Pepper's implant, which leads to a near-death experience for her. In it, JARVIS, masquerading as Happy, gives Pepper a cryptic vision and warning of the future.[11]

In a flashforward to an apocalyptic future 41 years ahead where the Mandarin has conquered the world, an aged Tony defeats his long-time foe with the help of his son Howard Anthony Stark and his granddaughter Ginny Stark, but Howard and Tony sacrifice themselves in the process. At the close of the story, Ginny buries the two next to a gravestone with the name "Virginia Potts Stark". Howard is also said to be 41 years old, suggesting that he will be born within the following year.[12]

The cybernetic technology implanted in Pepper’s chest caused a number of physical changes to her body: it fixed her eyesight (she needed glasses before), increased her metabolism, made her stronger, improved her reaction time and reflexes, and increased her IQ by about 25 points. The electromagnet has also been shown to give her some control over the magnetic fields around her, once allowing her to levitate briefly. She can also disintegrate bullets with it.

Pepper’s suit, the Mark 1616, appears similar to Iron Man's and can fly. It contains an AI version of Jarvis to assist her and answer questions, and is ideally suited to her biology and cybernetic enhancements.[13] However, in respect to Pepper’s wishes that she not become a weapon, the suit contains no weapons whatsoever, and is instead designed for “heavy rescue and recovery”. It contains repulsor technology, and electromagnetic field generators allowing her to suspend and tow massive loads and is powered by solar cells.[14]

In the Amalgam Comics Universe, DC Comics' Green Lantern and Marvel's Iron Man are combined to create Iron Lantern.[15] Iron Lantern is secretly Hal Stark, owner of Stark Aircraft, a developer of experimental aircraft. One of his test pilots is Pepper Ferris (an amalgamation of Pepper Potts and DC's Carol Ferris). Like both her DC and Marvel counterpart, she is involved in a love triangle, this time with Stark and his chief mechanic Happy Kalmaku (an amalgamation of Marvel's Happy Hogan and DC's Thomas Kalmaku). When Pepper comes in contact with a mysterious alien gem, she is transformed into Madame Sapphire (a combination of Marvel's Madame Masque and DC's Star Sapphire). Pepper Ferris first appeared in Iron Lantern #1 (April 1997), published jointly by Marvel and DC. She was created by Kurt Busiek (script) and Paul Smith (art).

In the alternate universe of the "Heroes Reborn" storyline, Pepper and Iron Man are lovers, although she can also be seen in a relationship with Happy Hogan. Stark is forced to leave her unexpectedly and without explanation, as his very presence in the universe will endanger her life and the lives of everyone else.

Pepper appears in the Marvel Zombies universe in Marvel Zombies Return, having just passed in her resignation to Stark, who at this point is a near-useless drunk. However, when the zombie Giant Man initiates an outbreak at Stark International, Pepper and Happy are among the zombified casualties. She is killed by Stark when he vomits a nanite-ridden formula on her, which was being developed as a potential cure for cancer. The formula destroys necrotic tissue- although it was only effective on zombie-Pepper because it was vomited into her mouth-, and dissolves Pepper into a skeleton.[16]

Virginia "Pepper" Potts can be seen in the Ultimate Universe during Ultimates 2. She and Happy (with whom she appears to be in a relationship) can be seen monitoring Tony when he uses the armor.[volume & issue needed] 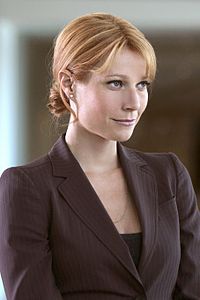 Gwyneth Paltrow as Pepper in the Iron Man film.