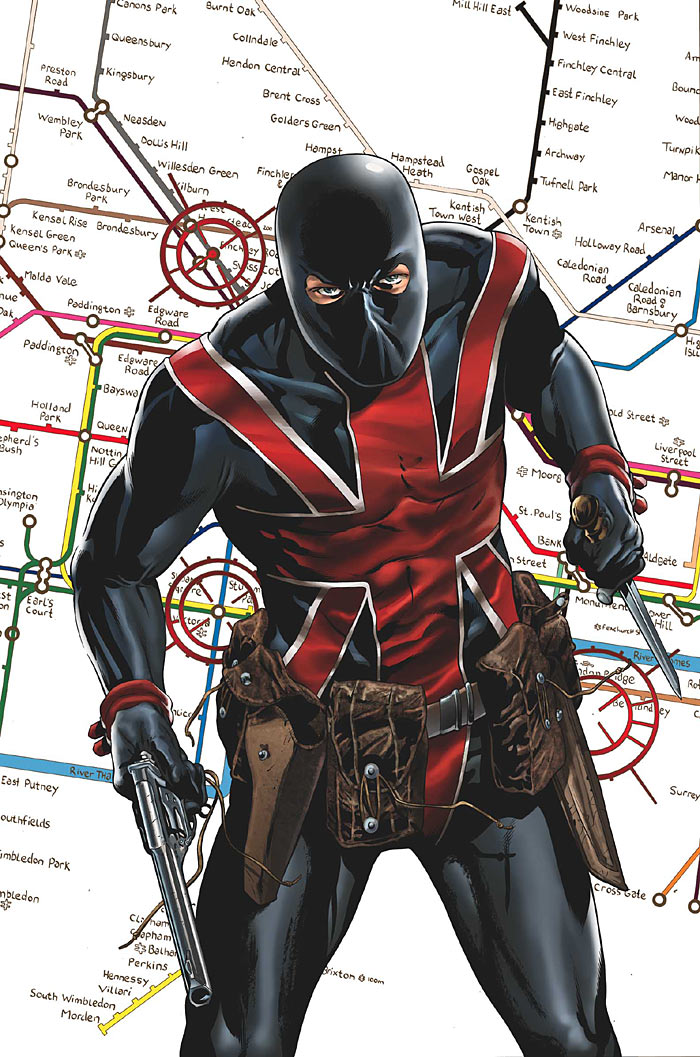 Union Jack is a fictional in the universe. He is considered a champion of the . [http://www.gayleague.com/gay/characters/display.php?id=57] The title of "Union Jack" has been used by three characters portrayed as living in three different eras.

The original Union Jack, James Montgomery Falsworth, first appears in comics in "The Invaders" #7. He was created by writer Roy Thomas and artist Frank Robbins. He fights both alone and as a member of the team .

A peer of the realm as Lord Falsworth, James Montgomery Falsworth is first active as Union Jack during . During his adventures, he encounters the mysterious Baron Blood, a vampire for the Germans. After the war, Lord Falsworth retires to his ancestral home in England to raise a family.

He is active again as Union Jack during . He becomes a member of the Invaders after the original Human Torch saves his daughter - Jacqueline Falsworth - from Baron Blood. Jacqueline is revived by a blood transfusion from the Human Torch which grants her the power of super-speed. As a result, she becomes the costumed hero Spitfire (a title she still holds in the 21st Century). After the attack, Lord Falsworth offers up his mansion as the Invaders' base of operations.

After Baron Blood's attack on Jacqueline, James discovers the vampire is actually his brother, John. During a battle, Blood crushes Union Jack's legs under a boulder, effectively ending his career as a hero. Before the battle ends, James is able to impale Blood on a silver-veined stalagmite.

Although unable to use his legs, James travels with the Invaders to Germany. There they meet up with James' son, Brian. Originally thinking his son a traitor, James learns that Brian fights against the Nazis as the costumed hero, the Destroyer. As a result, the two reconcile their differences and James passes the mantle of Union Jack on to Brian, at which point Brian abandons his Destroyer identity.

However, the father outlives the son when Brian is killed in an automobile accident in 1953.

He is seen again when Baron Zemo travels back in time, in "" #3. [comicbookdb|type=issue|id=89741|title="Thunderbolts Presents: Zemo - Born Better"]

James Montgomery Falsworth possessed no superhuman powers. However, he was trained in the field of espionage, a veteran of two world wars, and a highly effective combatant. He wore a bullet-proof costume and carried a 6" dagger and a .455 caliber , both of which he used with great skill.

Unlike Union Jack, who is a character into the World War II time line, the Destroyer actually is an original Golden Age character. The Destroyer first appeared in "Mystic Comics" #6 (October 1941), published by Marvel Comics' predecessor, . In Roy Thomas' 1970s series The Invaders, the Destroyer's Golden Age identity of Kevin "Keen" Marlow is explained away as an alias. The Destroyer is notable for being one of the first creations of industry legend Stan Lee.

Brian, and his friend and lover, Roger Aubrey, are initially sympathetic toward Germany and supportive of peace between Germany and the United Kingdom. Toward the end of the 1930s, the pair go into , but quickly discover the evil nature of the regime. Brian is thrown in prison, and Roger is given to German scientists.

Brian gains superpowers through the help of a German scientist who tries to recreate the Super Soldier Formula that resulted in . Brian escapes prison and becomes a costumed Nazi-fighter within Germany, calling himself the Destroyer.

Meanwhile, Roger is used for experiments. He is brainwashed and his body is reduced in size. Standing one foot tall but with the strength of a full-sized man, he is given the name "". With his memory gone, the Nazis unleash Dyna-Mite against the Allies, in a plot which involves the Crusaders.

Meanwhile, Brian, reunited with his family and reconciling with his father, investigates the past of Dyna-Mite. Brian ultimately finds out the truth behind Dyna-Mite, and Roger's size and memory are restored. After his father's legs are crushed by Baron Blood, Brian learns of his father's costumed identity as Union Jack. As a result, he takes up this identity in place of his father, joining the Invaders. Roger, in turn, takes on the mantle of the Destroyer.

Later, Brian is charged by magical lightning when fighting Thor. He gains the ability to shoot electricity from his fingertips. Following the war, Brian remains active as Union Jack, and is instrumental in founding the alongside Roger Aubrey and other heroes of the era.

In the 2008 "" he is part of the WWII-era Invaders battling the modern Avengers. [comicbookdb|type=title|id=18419|title="Avengers/Invaders"]

During his initial career as Union Jack II, Brian Falsworth possessed no superhuman powers. He was an athlete, but, having been exposed to a variant of the Super Soldier Formula, was enhanced to the peak of human potential, and was a highly skilled combatant. Like his father, he primarily used a Webley .455 revolver and a 6" dagger. After an encounter with Thor later in his career, he gained the ability to project bolts of mystic lightning from his fingertips. ["Invaders" (vol. 1) #32-33]

Named Byron Falsworth, Falsworth is Major Commonwealth ["Official Handbook of the Marvel Universe A-Z" vol. #2 (May 2008)] a member who featured in "Mighty World Of Marvel" vol. 2 #13.

The third person to take on the role of Union Jack is Joseph "Joey" Chapman. He first appears in "Captain America" #253. He was created by writer Roger Stern and artist John Byrne.

Chapman's incarnation as the current Union Jack is unique in that he is not a member of the Falsworth line or part of any British aristocratic family. Rather, Joey Chapman, born in , England, is the working class son of a shipbuilder.

Chapman becomes Union Jack when, while visiting Falsworth Manor with his friend, Kenneth Crichton (nephew of Brian Falsworth and later Baron Blood III), he dons the costume to stand in for Kenneth and save the life of James Montgomery Falsworth, Lord Falsworth, who has been targeted by Baron Blood.

For a time he fought crime on his own, serving as a hero for the common man as opposed to the aristocratic Captain Britain. Their rivalry was most apparent when they both were chosen as Knights of Pendragon by the Green Knight of Avalon. Captain Britain did not remain a Pendragon for long, but Union Jack stuck with the new team until it broke up when half the team travelled to a parallel world to offer humanitarian aid. During his time with the "KoP" Union Jack's physique increased to near Hulk like proportions and he went through a series of alternate costumes. After the "KoP" break up and his enhanced musculature returns to normal he revert to the classic uniform and returns to fighting crime solo. He also faces a vampire cult lead by a vampire who had been created by the original Baron Blood.

Chapman later wears an updated, militaristic costume, and joins the modern incarnation of the Invaders, led by Jim Hammond, the original Human Torch. For a time, Chapman became romantically involved with his New Invaders team mate, Spitfire. They have since resolved to be friends and he remains active in the UK's espionage community.

Like those who held the title of Union Jack before him, Joey Chapman is an athlete in peak physical condition. In addition, his strength, speed, and endurance are enhanced by the Power of the Pendragon. Chapman usually carries a handgun of some variety (changing it as appropriate to the mission) and a silver-edged dagger used for supernatural foes.

Union Jack's major appearances have been collected in a number of trade paperbacks: