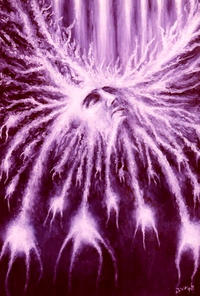 The astral body is a subtle body posited by many religious philosophers, intermediate between the intelligent soul and the physical body, composed of a subtle material.[1] The concept ultimately derives from the philosophy of Plato: it is related to an astral plane, which consists of the planetary heavens of astrology. The term was adopted by nineteenth-century Theosophists and neo-Rosicrucians.

The idea is rooted in common worldwide religious accounts of the afterlife[2] in which the soul's journey or "ascent" is described in such terms as "an ecstatic.., mystical or out-of body experience, wherein the spiritual traveller leaves the physical body and travels in his/her subtle body (or dreambody or astral body) into ‘higher’ realms".[3] Hence "the "many kinds of 'heavens', 'hells' and purgatorial existences believed in by followers of innumerable religions" may also be understood as astral phenomena, as may the various "phenomena of the séance room".[4] The phenomenon of apparitional experience is therefore related, as is made explicit in Cicero's Dream of Scipio.

The astral body is sometimes said to be visible as an aura of swirling colours.[5] It is widely linked today with out-of-body experiences or astral projection. Where this refers to a supposed movement around the real world, as in Muldoon and Carrington's book The Projection of the Astral Body, it conforms to Madame Blavatsky's usage of the term. Elsewhere this latter is termed "etheric", while "astral" denotes an experience of dream-symbols, archetypes, memories, spiritual beings and visionary landscapes. In reference to the secular scientific world view the concept is now generally considered superseded, being rooted in an attribution of materiality and dimensionality to the psychic world.

Neoplatonism is a branch of classical philosophy that uses the works of Plato as a guide to understanding religion and the world. In the Myth of Er, particularly, Plato rendered an account of the afterlife which involved a journey through seven planetary spheres and then eventual reincarnation. He taught that man was composed of mortal body, immortal reason and an intermediate "spirit".[6]

Neoplatonists agreed as to the immortality of the rational soul but disagreed as to whether man's "irrational soul" was immortal and celestial ("starry", hence astral) or whether it remained on earth and dissolved after death. The late Neoplatonist Proclus, who is credited the first to speak of subtle "planes", posited two subtle bodies or "carriers" (okhema) intermediate between the rational soul and the physical body. These were; 1) the astral vehicle which was the immortal vehicle of the Soul and 2) the spiritual (pneuma) vehicle, aligned with the vital breath, which he considered mortal.[7]

The word "astral" means "of the stars", thus the astral plane, consisting of the celestial spheres, is held to be an astrological phenomenon: "The whole of the astral portion of our earth and of the physical planets, together with the purely astral planets of our System, make up collectively the astral body of the Solar Logos". There are "seven types of astral matter" by means of which "psychic changes occur periodically".[8]

Such ideas greatly influenced mediaeval religious thought and are visible in the Renaissance medicine of Paracelsus and Servetus. In the romantic era, alongside the discovery of electromagnetism and the nervous system, there came a new interest in the spirit world. Franz Anton Mesmer spoke of the stars, animal magnetism and magnetic fluids. In 1801, the English occultist Francis Barrett wrote of a herb's "excellent astral and magnetic powers" - for herbalists had categorised herbs according to their supposed correspondence with the seven planetary influences.

In the mid-nineteenth century the French occultist Eliphas Levi wrote much of "the astral light", a factor he considered of key importance to magic, alongside the power of will and the doctrine of correspondences. He considered the astral light the medium of all light, energy and movement, describing it in terms that recall both Mesmer and the luminiferous ether.[9]

Levi's idea of the astral was to have much influence in the English-speaking world through the teachings of The Golden Dawn, but it was also taken up by Helena Blavatsky and discussed in the key work of Theosophy, The Secret Doctrine. Levi seems to have been regarded by later Theosophists as the immediate source from which the term was adopted into their sevenfold schema of planes and bodies, though there was slight confusion as to the term's proper use.

Blavatsky aligned the term "astral body" with the Indian linga sharira which is one of the seven principles of human life according to her, and the astral light with the Akashic Record, a kind of cosmic memory. According to the Theosophical founder William Q. Judge the astral world is also analogous to the world of ghosts. Judge wrote; "There are many names for the Astral Body. Here are a few: Linga Sarira, Sanskrit, meaning design body, and the best one of all; ethereal double; phantom; wraith; apparition; doppelganger; personal man; perispirit; irrational soul; animal soul; Bhuta; elementary; spook; devil; demon. Some of these apply only to the astral body when devoid of the corpus after death." [10]

However C.W. Leadbeater and Annie Besant (Adyar School of Theosophy), and following them, Alice Bailey, equated it with Blavatsky's Kama (desire) principle and called it the Emotional body a concept not found in earlier Theosophy. Astral body, desire body, and emotional body became synonymous, and this identification is found in much later Theosophically-inspired thought. The astral body in later Theosophy is "the vehicle of feelings and emotions" through which "it is possible...to experience all varieties of desire". We have a "life in the astral body, whilst the physical body is wrapped in slumber". So the astral body "provides a simple explanation of the mechanism of many phenomena revealed by modern psycho-analysis".[11] To this extent, then, the "astral body" is a reification of the dream-world self. 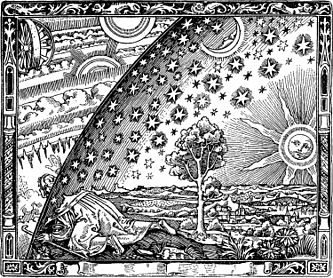 According to Max Heindel's Rosicrucian writings the Desire body is made of desire stuff from which human beings form feelings and emotions. It is said to appear to spiritual sight as an ovoid cloud extending from sixteen to twenty inches beyond the physical body. It has a number of whirling vortices (chakras) and from the main vortex, in the region of the liver, there is a constant flow which radiates and returns.[12] The desire body exhibits colors that vary in every person according to his or her temperament and mood. However, the astral body (or "Soul body") must be evolved by means of the work of transmutation and will eventually be evolved by humanity as a whole. According to Heindel, the term "astral body" was employed by the mediaeval Alchemists because of the ability it conferred to traverse the "starry" regions. The "Astral body" is regarded as the "Philosopher's Stone" or "Living Stone" of the alchemist, the "Wedding Garment" of the Gospel of Matthew[13] and the "Soul body" that Paul mentions in the First Epistle to the Corinthians[14]

According to Samael Aun Weor, who popularised Theosophical thought in Latin America, the astral body is the part of human soul related to emotions, represented by the sephirah Hod in the kabbalistic Tree of Life. However the common person only has a kamarupa, body of desire or "lunar astral body," a body related to animal emotions, passions and desires, while the true human emotional vehicle is the solar astral body, which can be crystallised through Tantric sex. The solar astral body is the first mediator between the Cosmic Christ, Chokmah, and the individual human soul.[15]

Gurdjieff refers to the astral body as the "body Kesdjan" or "vessel of the soul": it is of the sun and all planets, just as the physical body is of the earth. While it is not developed one is a "human being only in quotation marks", who cannot be considered in any meaningful sense to have a soul and who will "die like a dog".[16]

Parallels drawn between the idea of the astral and that of the unconscious mind have been noted above, for Sigmund Freud inherited Mesmer's awareness of the animal self, the value of hypnosis, trance and dream, replacing the physical idea of the life-force with a purely psychological paradigm of libido, id and subconscious mind. Later Wilhelm Reich tried to use vitalist biological theory and experiments to re-establish the materiality of the life-force.

Carl Jung has been aligned with the idea of the astral body by Jungians and Theosophists alike.[17] Jung himself drew on alchemical and classical imagery to explore the dynamics and symbols of memory, dream and religious initiation. He saw the astral journey as a paradigm of "modern man's search for a soul", and pictured a collective unconscious memory, driven by archetypal forces and knowable in the symbolic language of dreams and visions.[18]

Moreover, Jung saw this archetypal world as, like the astral plane, an "objective psyche", extending in the world at large, bridging mind and matter.[19] He worked with physicist Wolfgang Pauli in his attempt to lend rigor to an idea largely absent from European science since the renaissance. Early twentieth-century biologists like Ernst Haeckel viewed embryology as a recapitulation of evolution, which implies a kind of organising memory, and a few modern biologists, such as Rupert Sheldrake, influenced by Jungian ideas and by vitalism, have posited organising fields of life consisting of memories and drives.