The binomial coefficients appear as the entries of Pascal's triangle.

In elementary algebra, the binomial theorem describes the algebraic expansion of powers of a binomial. According to the theorem, it is possible to expand the power (x + y)n into a sum involving terms of the form axbyc, where the exponents b and c are nonnegative integers with b + c = n, and the coefficient a of each term is a specific positive integer depending on n and b. When an exponent is zero, the corresponding power is usually omitted from the term. For example,

(the two have the same value). These coefficients for varying n and b can be arranged to form Pascal's triangle. These numbers also arise in combinatorics, where

gives the number of different combinations of b elements that can be chosen from an n-element set.

Statement of the theorem

According to the theorem, it is possible to expand any power of x + y into a sum of the form

is a specific positive integer known as binomial coefficient. This formula is also referred to as the Binomial Formula or the Binomial Identity. Using summation notation, it can be written as

The final expression follows from the previous one by the symmetry of x and y in the first expression, and by comparison it follows that the sequence of binomial coefficients in the formula is symmetrical.

A variant of the binomial formula is obtained by substituting 1 for x and x for y, so that it involves only a single variable. In this form, the formula reads

The most basic example of the binomial theorem is the formula for the square of x + y:

The binomial theorem can be applied to the powers of any binomial. For example,

For a binomial involving subtraction, the theorem can be applied as long as the opposite of the second term is used. This has the effect of changing the sign of every other term in the expansion: 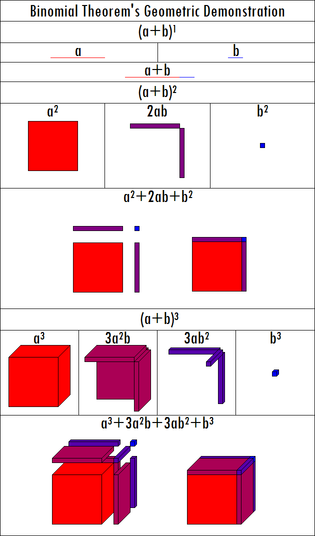 In calculus, this picture also gives a geometric proof of the derivative (xn)' = nxn − 1:[6] if one sets a = x and b = Δx, interpreting b as an infinitesimal change in a, then this picture shows the infinitesimal change in the volume of an n-dimensional hypercube, (x + Δx)n, where the coefficient of the linear term (in Δx) is nxn − 1, the area of the n faces, each of dimension (n − 1):

Substituting this into the definition of the derivative via a difference quotient and taking limits means that the higher order terms – (Δx)2 and higher – become negligible, and yields the formula (xn)' = nxn − 1, interpreted as

"the infinitesimal change in volume of an n-cube as side length varies is the area of n of its (n − 1)-dimensional faces".

If one integrates this picture, which corresponds to applying the fundamental theorem of calculus, one obtains Cavalieri's quadrature formula, the integral

The coefficients that appear in the binomial expansion are called binomial coefficients. These are usually written

The coefficient of xn−kyk is given by the formula

which is defined in terms of the factorial function n!. Equivalently, this formula can be written

with k factors in both the numerator and denominator of the fraction. Note that, although this formula involves a fraction, the binomial coefficient

is actually an integer.

can be interpreted as the number of ways to choose k elements from an n-element set. This is related to binomials for the following reason: if we write (x + y)n as a product

then, according to the distributive law, there will be one term in the expansion for each choice of either x or y from each of the binomials of the product. For example, there will only be one term xn, corresponding to choosing 'x from each binomial. However, there will be several terms of the form xn−2y2, one for each way of choosing exactly two binomials to contribute a y. Therefore, after combining like terms, the coefficient of xn−2y2 will be equal to the number of ways to choose exactly 2 elements from an n-element set.

The coefficient of xy2 in

because there are three x,y strings of length 3 with exactly two y's, namely,

where each subset specifies the positions of the y in a corresponding string.

Expanding (x + y)n yields the sum of the 2 n products of the form e1e2 ... e n where each e i is x or y. Rearranging factors shows that each product equals xn−kyk for some k between 0 and n. For a given k, the following are proved equal in succession:

This proves the binomial theorem.

Around 1665, Isaac Newton generalised the formula to allow real exponents other than nonnegative integers, and in fact it can be generalised further, to complex exponents. In this generalisation, the finite sum is replaced by an infinite series. In order to do this one needs to give meaning to binomial coefficients with an arbitrary upper index, which cannot be done using the above formula with factorials; however factoring out (n−k)! from numerator and denominator in that formula, and replacing n by r which now stands for an arbitrary number, one can define

is the Pochhammer symbol here standing for a falling factorial. Then, if x and y are real numbers with |x| > |y|,[7] and r is any complex number, one has

When r is a nonnegative integer, the binomial coefficients for k > r are zero, so (2) specializes to (1), and there are at most r + 1 nonzero terms. For other values of r, the series (2) has infinitely many nonzero terms, at least if x and y are nonzero.

This is important when one is working with infinite series and would like to represent them in terms of generalised hypergeometric functions.

Taking r = −s leads to a useful but non-obvious formula:

Formula (2) can be generalised to the case where x and y are complex numbers. For this version, one should assume |x| > |y|[7] and define the powers of x + y and x using a holomorphic branch of log defined on an open disk of radius |x| centered at x.

The binomial theorem can be generalised to include powers of sums with more than two terms. The general version is

where the summation is taken over all sequences of nonnegative integer indices k1 through km such that the sum of all ki is n. (For each term in the expansion, the exponents must add up to n). The coefficients

are known as multinomial coefficients, and can be computed by the formula

counts the number of different ways to partition an n-element set into disjoint subsets of sizes k1, ..., kn.

It is often useful, when working in more dimension, to deal with products of binomial expressions. By the binomial theorem this is equal to

This may be written more concisely, by multi-index notation, as

Using the binomial theorem, the expression on the right can be expanded, and then the real and imaginary parts can be taken to yield formulas for cos(nx) and sin(nx). For example, since

De Moivre's formula tells us that

which are the usual double-angle identities. Similarly, since

The number e is often defined by the formula

Applying the binomial theorem to this expression yields the usual infinite series for e. In particular:

The kth term of this sum is

As n → ∞, the rational expression on the right approaches one, and therefore

This indicates that e can be written as a series:

Indeed, since each term of the binomial expansion is an increasing function of n, it follows from the monotone convergence theorem for series that the sum of this infinite series is equal to e.

The binomial theorem in abstract algebra

Formula (1) is valid more generally for any elements x and y of a semiring satisfying xy = yx. The theorem is true even more generally: alternativity suffices in place of associativity.

This article incorporates material from inductive proof of binomial theorem on PlanetMath, which is licensed under the Creative Commons Attribution/Share-Alike License.