The shoots are green, often with a whitish to pink or violet waxy coating when young. Branches are smooth, somewhat brittle, and tend to retain a fresh green colour rather than forming a bark of dead, protective tissue. The bark on its trunks is pale gray or light brown, deeply cleft into broad ridges, and scaly.[5]

Unlike most other maples (which usually have simple, palmately lobed leaves), Acer negundo has pinnately compound leaves that usually have three to seven leaflets. Simple leaves are also occasionally present; technically, these are single-leaflet compound leaves. Although some other maples (such as A. griseum, Acer mandshuricum and the closely related A. cissifolium) have trifoliate leaves, only A. negundo regularly displays more than three leaflets.

The leaflets are about 5–10 centimetres (2.0–3.9 in) long and 3–7 centimetres (1.2–2.8 in) wide with slightly serrate margins. Leafs have a translucent light green colour and turn yellow in the fall.

The flowers are small and appear in early spring on drooping racemes 10–20 centimetres (3.9–7.9 in) long. The seeds are paired samaras, each seed slender, 1–2 centimetres (0.39–0.79 in) long, with a 2–3 centimetres (0.79–1.2 in) incurved wing; they drop in autumn or they may persist through winter. Seeds are usually both prolific and fertile.

Unlike most other maples, A. negundo is fully dioecious and both a "male" and "female" tree are needed for either to reproduce.

Indicative of its familiarity to many people over a large geographic range, A. negundo has numerous common names.

Other common names are based upon this maple's similarity to ash, its preferred environment, its sugary sap, a description of its leaves, its binomial name, and so on. These names include (but are not limited to) Ash-, Cut-, or Three-leaf (or -leaved) Maple; Ash Maple; Sugar Ash; Negundo Maple; and River Maple.[7] 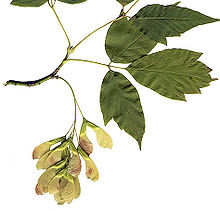 A. negundo leaves and seeds

Acer negundo is often discussed as comprising three subspecies, each of which was originally described as a separate species. These are:

Some authors further subdivide subsp. negundo into a number of regional varieties but these intergrade and their maintenance as distinct taxa is disputed by many. Even the differences between recognized subspecies are probably a matter of gradient speciation

Finally, note that a few botanists treat Boxelder Maple as its own distinct genus (Negundo aceroides) but this is not widely accepted.

As noted, varieties thrive across the United States and Canada. It may also be found as far south as Guatemala

This species prefers bright sunlight. It often grows on flood plains and other disturbed areas with ample water supply, such as riparian habitats. Human influence has greatly favoured this species; it grows around houses and in hedges, as well as on disturbed ground and vacant lots.

Several birds and some squirrels feed on the seeds. The Evening Grosbeak uses them extensively. The Maple Bug (also known as the Boxelder Bug) lays its eggs on all maples, but prefers this species.

Although its weak wood, irregular form, and prolific seeding might make it seem like a poor choice for a landscape tree, A. negundo is one of the most common maples in cultivation and many interesting cultivars have been developed, including:[4]

Although native to North America, it is considered an invasive species in some areas of that continent. It can quickly colonize both cultivated and uncultivated areas and it has become naturalized in eastern China.[4] The range is therefore expanding both in North America and elsewhere. It can also be found in some of the cooler areas of the Australian continent where it is listed as a pest invasive species.

Although its light, close-grained, soft wood is considered undesirable for most uses, this tree has been considered as a commercial source of wood fiber, for use in fiberboard.

There is some commercial use of the tree for various decorative applications, such as turned items (bowls, stem-ware, pens). Primarily burl wood and injured wood, where the primary reason is this wood's reaction to injury, where the injured wood develops a red stain.

Acer negundo was identified in 1959 as the material used in the oldest extant flutes from the Americas that were made of wood. These early artifacts, excavated by Earl H. Morris in 1931 in the Prayer Rock district of present-day NorthEastern Arizona, have been dated to 620-670 CE[8].

The style of these flutes, now known as Anasazi flutes, uses an open tube and a splitting edge at one end. This design pre-dates the earliest known Native American Flute (which use a two-chambered design) by 1,200 years.