Dvin (Armenian: Դվին; Greek: Δούσιος or Τίβιον; also Duin or Dwin according to ancient sources) was a large commercial city and the capital of early medieval Armenia. It was situated north of the previous ancient capital of Armenia, the city of Artaxata, along the banks of the Metsamor River, 35 km to the south of modern Yerevan. The site of the ancient city is currently not much more than a large hill located between modern Hnaberd (just off the main road through Hnaberd) and Verin Dvin, Armenia. Systematic excavations at Dvin have proceeded since 1937 and have produced an abundance of materials that have shed light into the Armenian culture of the 5th to the 13th centuries.

Ancient Armenian literary sources almost always give the name of the ancient city of Dvin as Dwin or Duin. Later authors favored the Dvin appellation, which is the most common form given in scholarly literature.[1]

The ancient city of Dvin was built by Chosroes III of Armenia in 335 on a site of an ancient settlement and fortress from the third millennium B.C. Since then the city had been used as the primary residence of the Armenian Kings of the Arshakuni Dynasty. Dvin boasted a population of about 100,000 citizens who were in various professions including arts and crafts, trade, fishing, etc.

After the fall of the Armenian Kingdom in 428, Dvin became the residence of Sassanid appointed marzpans (governors), Byzantine kouropalates and later Umayyad and Abbasid appointed ostikans (governors), all of whom were of senior nakharar stock. In 640 Dvin was the center of the emirate of Arminia.

Under Arshakuni rule, Dvin prospered as one of the most populous and wealthiest cities east of Constantinople. Its welfare continued even after the partition of Armenia between Romans and Sassanid Persians and eventually became a target during the height of the Arab invasions. According to Sebeos and Catholicos John V the Historian, Dvin was captured in 640 during the reign of Constans II and Catholicos Ezra. The Arabs called the city Dabil.

Despite the fact that Dvin, was a battleground between Arabs and Byzantine forces for the next two centuries, in the 9th century it was still a flourishing city. Frequent earthquakes and continued Arab oppression led to the decline of the city in the beginning of the 10th century. During a major earthquake in 893, the city was destroyed along with most of its 70,000 inhabitants.

The Byzantines conquered Armenia along with Dvin in 1045 from the Bagratunis. In 1064 the Seljuks occupied the city. The Kurdish Shaddadids ruled the city as Seljuk vassals from then on until the Georgian King George III conquered the city in 1173. In 1201-1203 during the reign of Queen Tamar the city was again under Georgian rule. In 1236 the city was completely destroyed by Mongols. 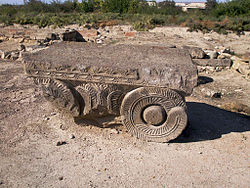 Situated in the central square of the ancient city was the Cathedral of S. Grigor. It was originally constructed in the 3rd century as triple-nave pagan temple with seven pairs of interior structural supports. The temple was rebuilt in the 4th century as a Christian church, with a pentahedral apse that protruded sharply on its eastern side. In the middle of the 5th century, an exterior arched gallery was added to the existing structure. At the time that the cathedral was built, it was the largest in Armenia and measured 30.41 meters by 58.17 meters.

Ornate decorations adorned the interior and the exterior of the building. The capitals of the columns were decorated with fern-like relief, while the cornices were carved in the design of three interlaced strands. The interior floor of the structure was made up of mosaic multi-colored soft-toned slabs in a geometric pattern, while the floor of the apse was decorated in the 7th century with a mosaic of smaller stone tiles representing the Holy Virgin. It is the most ancient mosaic depiction of her in Armenia.

By the middle of the 7th century, the cathedral was rebuilt into a cruciform domed church with apses that protruded off of its lateral facades. All that remains of the cathedral today are the stone foundations uncovered during archaeological excavations in the 20th century.